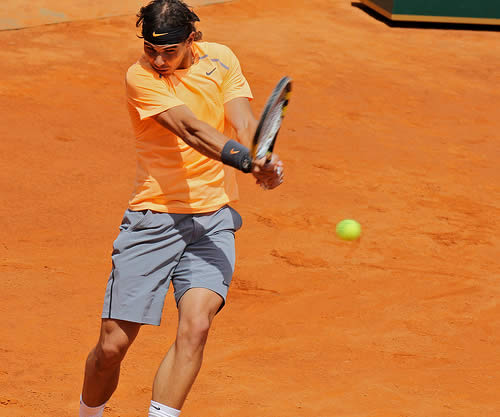 In any other era or country, Nicolas Almagro, winner of 12 titles from 19 finals—every one of them on clay—might have hoped for greater fame.

But while he had twice before reached the Barcelona semi-finals—on his favourite surface, in his homeland—twice he had come out the loser. For despite being a constant presence in the top dozen players in the world for well over two years, it has been this man’s misfortune to be but one among a golden array of Spanish players who have dominated clay.

With 13 Spaniards in the top 100, seven inside the top 50, the competition for recognition has always been fierce, especially when two of the very best remained a constant presence above him in the rankings. He lost the two Barcelona semis to those very men, David Ferrer and Rafael Nadal.

But even alongside such outstanding compatriots, the achievements of Almagro are remarkable. Among active players, only Nadal has won more clay titles. Almagro’s 12 stands ahead of the 10 owned by Ferrer, Tommy Robredo and even Roger Federer. He also stands third among active players in clay-court match-wins, 220-102.

Perhaps more of a surprise for a Spanish clay-courter, the man from Murcia has one of the finest backhands on the tour—a glorious, powerful single-handed stroke—and just as potent a serve—he leads the entire tour in aces this year.

Almagro enjoyed an early piece of good fortune in Barcelona this year with the early loss of the top-seeded Ferrer. Then the ease and confidence with which Almagro bowled through strong clay-court opponents was also impressive. He did not drop a set to Marcel Granollers, Juan Monaco or Philipp Kohlschreiber, the last match taking a mere 51 minutes.

And when he looked across at the other half of the draw, his biggest rival was far from playing his best tennis in this rain-blighted week—until Nadal came up against Milos Raonic in the semis: he raced to a 6-4, 6-0 win.

So in the end, Almagro did face his bête noir for a 10th time, attempting to beat him for the first time in their first final.

Of course, even without that head-to-head record, the task looked fearsome. Nadal, in his sixth final in six tournaments this year, had not lost in Barcelona since 2003, a 38-match streak through seven consecutive titles. But the cause was not entirely hopeless. In two Roland Garros quarter-finals, Almagro had taken Nadal to three tie-breaks, and in both the Madrid and Paris Masters, he had taken the first set. Indeed in Paris, he served for the match at 40-0 in the third set before finally losing.

Almagro’s next piece of good fortune came in the opening game on another cold and cloud-laden Barcelona as Nadal made a slow start to offer up a quick break.

Then Almagro’s serve proved its worth in the second, and he held to love not only with a strong first delivery but in following up with great angles from his second strike on both wings.

Now with umbrellas up all around the arena, Almagro threw in a show-stopping drop shot on Nadal’s next serve to earn another break chance. Nadal tried to pound the Almagro backhand into submission, but he could not break it down and Almagro finished with a forehand winner off a Nadal drop shot to break again and lead 3-0.

There was brief pause while the lines were checked to ensure they had not become slippery—far from ideal for their now-warm bodies in such cold conditions. And back into play, Nadal took advantage as the Almagro right arm started to make errors in the heavy conditions. Nadal looped his huge forehands securely to the back court while the potency of Almagro’s serve and flatter ground strokes diminished in the damp: Nadal broke.

Benefiting briefly from new balls in the eighth, Almagro held serve with an ace and angled a forehand away for a break point, only to see Nadal hit his first ace of the match. Again Almagro went on the offensive, moving forward to make a forehand winner, then a down-the-line winner, but the Nadal serve held strong through almost 10 minutes, and Almagro found himself serving to save the set.

Right on cue, Nadal produced some remarkable tennis, particularly in defence, returning a great Almagro lob with an inch-perfect hot-dog, and he broke for the set, 6-4.

Nadal had won just two points more than his opponent in that first set, but then won the next seven before Almagro dug deep to defend his serve from 0-40 down. However, Nadal had momentum, confidence and the feel of both the court and his opponent. He broke in the fourth game for a 3-1 lead, held for 4-1, and kept his lead to the end.

Almagro, so often in the past something of a hot-head, kept his frustration under control but could not break down the defending champion—any more than the seven who had gone before him in Barcelona finals. Nadal closed out the match to love with a flourish of an overhead smash, 6-3.

Not only was this Nadal’s 39th straight match-win in Barcelona but also his 39th clay title, the latest in a jaw-dropping record on clay. In Monte Carlo, he won eight straight titles until this year with 48 wins from 50 matches. In Rome, he has won six titles and 36 from 38 matches. And at the French Open, he has won 52 of 53 matches in a record seven titles.

So all eyes turn to Madrid, and more particularly Rome, as the world’s best flex their muscles for clay-court dominance. Nadal will want to assert his superiority over all-comers before having to face—possibly—three of the top four men in Paris.