After so many false dawns, the news that Rafael Nadal would return on the benign clay of South America stole the headlines 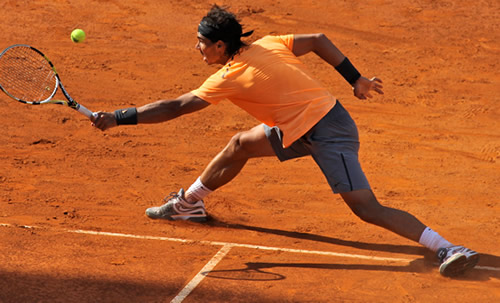 Rafael Nadal has not played since Wimbledon Photo: Marianne Bevis

While most of the tennis tour ploughs the furrow of the northern hemisphere’s indoor courts—Rotterdam and Marseille, Memphis and San Jose—the burnished clay of South America is luring a select band of players away from the February chill to its sun-drenched shores.

For the golden courts, the tropical surroundings and the exotic locations of tennis’s “golden swing” through South America give the afficionados of clay a chance for some respite from the hot, hard surfaces that dominate so much of the tour.

It is a brief hiatus touched by fiesta and Latin spirit, where Spanish and Portugese replace English and French as the lingua franca. Indeed only two champions this century have broken the stranglehold of Spain and South America throughout this entire four-country Latin-American swing.

But there are signs that 2013 could mark the start of something new for this vast, passionate continent. Suddenly, South America is on the sporting world’s lips—helped not a little by its Olympian debut in 2016.

Tennis is one of the sports to bolster its growing profile, starting with an additional 500 event in Rio in next year’s “golden swing” and, in another brief clay window after Wimbledon, Bogota in Colombia will also join the map.

Perhaps, then, it is no coincidence that the biggest names in the sport have chosen this season to lend their presence to the South American cause. It began after the World Tour Finals with Novak Djokovic making his first professional visit to the continent for an exhibition tournament in Rio.

He was swiftly followed by a three-country, six-match, multi-player tour headed by Roger Federer. The Swiss, who had never stepped foot on the continent before, began in Brazil, stopped off in Argentina and ended the trip in Colombia.

The latest man to play the South America card is just as starry as the first two but is also bringing with him the tennis story—and answering the tennis question—of the last eight months.

Rafael Nadal, absent with a persistent knee injury since his second-round exit at Wimbledon last year, has postponed his return many times over: first from the Olympics, where he was scheduled to carry the Spanish flag; then from the US Open; next from the Paris Masters and the World Tour Finals.

It was clear he would be unfit for the Davis Cup final, too, but most expected him to return to the Australian Open swing. However, hampered further by a stomach virus, he withdrew from all the post-Christmas events up to and including the Australian Open itself.

With so many false dawns, then, the news that he would return on the benign clay of South America became headline news. Suddenly, this quiet, beautiful swing had acquired the extra golden touch of the one of tennis’s best-ever clay-courters: Nadal would play at the culmination of the swing, the 500 event in Acapulco—eight years after his only other visit to South America.

But the news grew better for fans of the charismatic Spaniard. Tempted, perhaps, by the red dust that he loves so much, by the opportunity to build his match-fitness away from the glare of European and American media, and by the support of long-standing friends such as Argentina’s Juan Monaco, he revised his schedule to include the Brazil Open in Sao Paulo.

Shortly after that, he brought forward his return to the first clay event of 2013, the Chilean tournament in Vina del Mar.

For Chile, the news must have felt Christmas and summer all rolled into one—which is, of course, what this jewel of a country enjoys every year. For the return of Nadal is not only the most highly anticipated news in men’s tennis by one of its most followed and recognisable faces. It is not only Nadal’s first visit to South America since he came and won the Acapulco and Costa do Sauipe titles in 2005. It is his first ever appearance in Chile.

Both tournament and country are, not surprisingly, riding a wave of excitement, with the website listing all former No1s who have graced their tennis courts before. Mats Wilander lost in the first round in 1994 (but won the doubles title)—the same year that a young Chilean called Marcelo Rios made his debut. Rios became No1 in 1998, reached the final of his home event four times, but never won it.

Carlos Moya lost in the opening round in 1995, as did Gustavo Kuerten in 1996, and Jim Courier reached the quarters in 1998. Kuerten would return to take the title in 2000 but the tournament’s most prolific winner never quite made it to No1. Fernando Gonzalez was nevertheless the most popular of all. With dark and handsome looks that scream Chile, he has since retired to the place of his birth, the Chilean capital Santiago.

Nadal is, then, the latest in a line of former No1s, and perhaps the most illustrious who has ever visited this huge sliver of a nation sandwiched between Pacific rollers and the Andes. No wonder Chile’s great and good have queued up to welcome him.

First came an hour-long meeting with President Piñera, but Nadal also met with Gonzalez and another famous veteran of Chile’s courts, Nicolas Massu—who at 33, has taken a wild card to play in Vina del Mar, and is drawn to meet Nadal in the quarter-finals.

Massu expressed his country’s feelings: “It’s an honour to have Rafa here, a player with such status.

“I admire him a lot, because at 26 he’s already one of the greatest of all time… It’s the best tennis news for Chile in years. It would be a dream to face Nadal in [Massu’s birthplace] Viña.”

But it is likely to be with fellow Spaniards—and there are seven more of them in Vina del Mar—and defending champion Monaco that Nadal relaxes. He is, in fact, scheduled to join forces with his Argentine friend in the doubles draw before testing out his knee solo.

Nadal is, though, talking a cautious game of limited expectations for his immediate success. After an hour’s training session—still wearing a knee support—with compatriot Tommy Robredo, he talked to the media with his characteristic openness.

“I hope the tournament will help me to get the feeling I need to add week after week after a long period without competition…Results are the least important thing right now.

“I need weeks of working [on] the circuit. This is my first week and I don’t think the goals are the same as the ones I will have in two more months. I have to take it slowly and be humble enough to know that things won’t be as good as they were before my injury. I need to be patient.

He also had words of praise for his hosts: “For me, it is a cause for happiness just knowing that I come to compete, especially with the reception here in Chile and Viña del Mar…I hope you enjoy every minute of this tournament.”

The Chileans may have only days to enjoy his stay—which is a pity for a country that spans 2,700 miles from the world’s driest desert, the Atacama, in the north, to the breath-taking wilderness of mountains and glaciers in the south.

But here’s hoping Nadal does have time to savour Chile’s finest fruit—Vina del Mar is, after all, “the vineyard by the sea”. Better still, he should sip a luscious pisco sour—Chile’s unique frothy blend of grape spirit and limes.

And perhaps the tennis tour should re-Christen this leg of the “Golden Swing” in homage not to gold but to Chile’s most famed mineral. How perfectly the “copper swing” captures the colour of the courts in a country that will remember for many years the week that Nadal came to play.