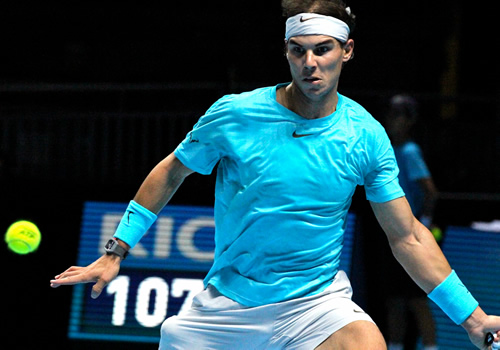 Rafael Nadal admits it would mean a lot to him if he can win his first-ever ATP World Tour Finals title in London this week.

The world No1 battled to a 7-5 6-3 win over Roger Federer on Sunday to book his place in Monday’s showdown against Novak Djokovic, who overcame Stanislas Wawrinka in straight sets.

The 27-year-old has never won the season-ending tournament, and the Spaniard admits that beating Djokovic to win the title would be special for him.

“For me every match means a lot, every tournament,” said Nadal. “It’s true that this tournament is special and I’ve never had the chance to win here.

“So it would be great if any year I have the chance to finish the year with a victory. But I know a lot of work remains, probably the most difficult [match].

“I think if I don’t play my best tomorrow, I’m not going to have chances. I need to play more aggressive.

Federer, meanwhile, insisted that he is feeling “confident and excited” heading into 2014 after a positive end to the season for the Swiss.

“I think it was a stronger finish than I thought it was going to be in Basel, Paris and London,” Federer said.

“I’m more positive now looking ahead than I would have been a few months ago where I wasn’t quite sure what to expect after the US Open.

“Beating two Top 10 players is a good thing for me after not having beaten any for almost seven or eight months.

“Considering the back issues I’ve had, I’m pleased that I’m pain free for a long period of time now with a lot of tennis.

“What I learned is that I can play three weeks pretty easily. I played a lot of matches as of late, a lot of three setters, a lot of tennis.

“From that standpoint, it’s very satisfying knowing that the body can do it, the mind can do it, life allows it to happen.”