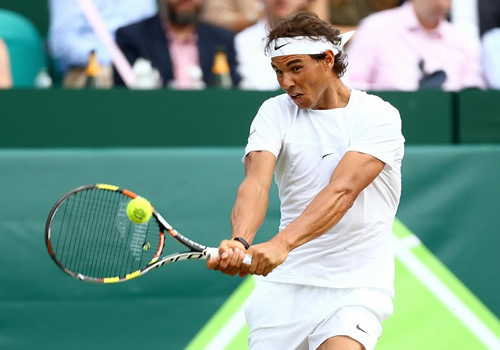 Rafael Nadal in action at The Boodles Photo: Jordan Mansfield

Rafael Nadal says that he is “feeling good” on grass as the Spaniard continues his preparations for Wimbledon.

Nadal stepped up his prep for the third Grand Slam of the year with a 6-4 6-2 win over Robin Haase at The Boodles on Friday.

And the 29-year-old, who lost to Alexandr Dolgopolov in the first round of the Aegon Championships at Queen’s Club earlier this month, insists that he feels ready for Wimbledon, which gets under way on Monday.

“The last couple of tournaments I was playing well,” said Nadal. “I have good feelings on grass and I just try to be ready for Wimbledon.

“It’s been good so far on grass. In Stuttgart I won the title on grass for the first time in five years and that was very important for me.

“At Queen’s I had a good chance to win my match but I missed a few opportunities. He played a little better than me. On grass that sort of thing happens.

“This was a good practice match for me against Robin.The atmosphere is great here and, seriously, the Club is amazing. It’s my first time here and I hope it’s not going to be the last.”