Rafael Nadal: It is ‘beautiful’ to be in rival Roger Federer’s home town Basel 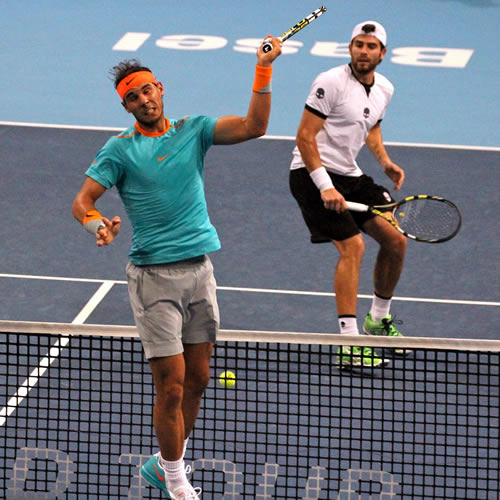 Roger Federer could find himself facing arch rival Rafael Nadal for the 34th time – and for just the first time on home soil – come closing weekend at one of Switzerland’s most important sporting events.

The two men switched places in the rankings just before they arrived in Basel for the Swiss Indoors, giving Federer the top seeding at the tournament where he has reached the final 10 times and gone on to win five times.

Nadal’s history in Basel could not be more different. When he last visited Basel in 2004, he was 18 years old, ranked 48 and, just as in his only other visit to the tournament the previous year, lost in the first match.

His planned returns here the last two years were thwarted by injury and fatigue, and this year’s promised visit also began to look like a pipe-dream when he developed appendicitis during the Asian swing.

But some heavy-duty antibiotics, and a determination to try and make it to the end of a packed season before undergoing surgery, saw him make it to Switzerland for the first time in a decade, seeded No2.

So how did he feel in Basel after so long, and having enjoyed so little success in the home of his oldest rival?

“I feel great,” said Nadal. “And I think all the time when Roger comes to Spain, he feels the love of the people, the respect of everybody in Spain for his tennis and for him as a person, and for our rivalry.

“Our rivalry is not [the kind of] rivalry that we hate each other, it’s one that we respect each other. There have been a lot of important moments for both of us on court.

“It is beautiful to be in his home today, feeling that the fans understand this rivalry the same as the Spanish fans. The crowd supported me and was happy to see me here, and I just want to say thank you very much for coming to fill the stadium.”

Asked about his form, though, he was keen to play down targets and play up the pleasure of playing.

“I don’t think I have played enough matches to be at my top level, but that’s not my goal today,” he continued. “That is just to enjoy the last part of the season and enjoy every moment.

“After all that happened in this second part of the season, there’s no pressure for me and no important goals for the rest of the year. Just to enjoy the love of the fans, enjoy tennis in general, and the tournament.”

And if there was any doubt about the support Nadal enjoys here, the St Jakobshalle was packed to the rafters for his Monday evening opener.

If it does come down to a face-off against Federer on Sunday, though—well that will be a very different story.