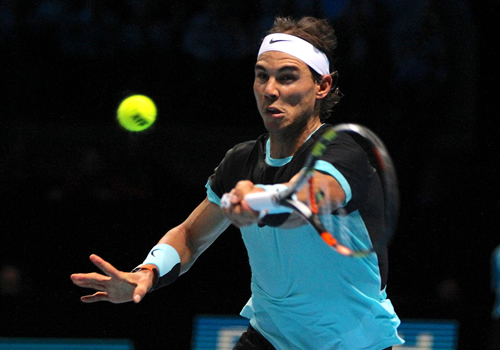 It has so often been the case at the last Masters of the year in Paris Bercy: every round and every point can mean the difference between winning the race to the World Tour Finals or losing it.

For the only indoor Masters among of the nine that make up the ATP’s elite level of competition brings the curtain down on the men’s main-tour season for all but the elite bands that head to the World Tour Finals in London or the #NextGen finals in Milan.

The line-up for Milan is set, but the Race to London does, as always, go right down to the wire. Two places remain, and a good half dozen or more players in the Paris draw have a shot at stealing those places.

Paris has sometimes also been the site of another big race: the one that crowns the end-of-year No1. Last year, the title in Paris was part of a late-season sweep of titles that carried Andy Murray to a thrilling showdown with Novak Djokovic in London—and on into the final match at the O2 itself.

This year, there had been hopes of a similar conclusion at the World Tour Finals as Rafael Nadal and Roger Federer swept through the year to grab the lion’s share of Major and Masters titles. But Federer bypassed the clay season to recover from his surge through the first quarter of the year, and was then forced to withdraw from Cincinnati with a lingering back problem.

He went on to win the Shanghai Masters and then Basel, but his back has clearly had enough. Federer pulled out of Paris last night to recover, and that as good as handed Nadal the year-end No1. The Spaniard now needs to win only one match in the French capital.

That race, then, is over, but it is not only Federer who is missing in Paris. Defending champion Murray, four-time champion Djokovic, 2014 finalist Milos Raonic, two-time finalist Gael Monfils, plus top-10 players such as Stan Wawrinka, Kei Nishikori, and Tomas Berdych, have all closed down their seasons with injury. Indeed 13 men in the top 50 will play no part in the draw.

But every cloud has a silver lining. While end-of-season injury and fatigue have often plagued the Paris Masters, which comes hot on the heels of the intense Asian swing—an 11-hour jet-lag journey away—and then the pair of 500s in Basel and Vienna, it has also opened up the field for new names to get a piece of the Masters action and the considerable points that may take them across the London finish line.

Paris, then, is the one where the stranglehold of the ‘big four’ has loosened its hold just a little, and fellow top-10 campaigners have won their only Masters titles here: Robin Soderling, David Ferrer and Berdych among them. One of Jo-Wilfried Tsonga’s two Masters was won here, and the same is true for other well-known, though now retired, names from the last decade of so: David Nalbandian and Nikolay Davydenko.

One man who has not yet won in Paris, though, is current world No1 Nadal, who was a finalist a full 10 years ago. Since that debut appearance in 2007, he has played only four times, but this year, rested from his exertions in Beijing and Shanghai after missing Basel, he is the favourite to put that right.

He certainly should not have too many problems getting those significant second-round points: He faces Hyeon Chung. His route to the quarters is straightforward, but there he could face one of two men with ambitions to reach their first World Tour Finals, Sam Querrey or Pablo Carreno Busta.

The latter is currently in the last qualifying place but has struggled to close the deal since his US Open semi-final run, just one win in four tournaments. Querrey has won just two matches in three tournaments. All of which gives their possible third-round meeting greater than usual significance.

Juan Martin del Potro finds himself in a tough quarter, and though his form has excelled from his semi run at the US Open and on through Shanghai, Stockholm and Basel, he developed back stiffness on his way to the final at the Swiss Indoors.

How much he has left in the tank must be an issue, especially in a section where fellow seeds Alexander Zverev and Grigor Dimitrov have already qualified for London—and incidentally became debutant Masters champions this year.

Here, too, are dangerous non-seeds Richard Gasquet, Diego Schwartzman and John Isner—the last was runner-up last year. All that before a likely Nadal showdown in the semis, and del Potro will need a final finish to stay in the hunt.

Goffin closes in, but will be tested

David Goffin has been close to closing his London deal since winning back-to-back titles in Shenzhen and Tokyo, and did his cause some good with a semi run in Basel last week. If he can reach the semis in Paris, he will confirm his place, but the performance of others may help him get there sooner.

He may hope that is the case, for his route to the semis is full of big hurdles. Just to reach the quarters he will have to beat two from Adrian Mannarino, Ferrer, Tsonga—finalist this weekend in Vienna and closing on London—and Julien Benneteau. Meanwhile the seeds in the way of the semis are Marin Cilic and Roberto Bautista Agut.

Lucas Pouille enjoyed an important boost at the bottom of the draw, for he it is who benefited from Federer’s withdrawal to fill the No2 spot—though the points he won with the title in Vienna would have ranked him among the seeds in Paris.

His first seed is Jack Sock, who has won only four matches since early August. In the quarters, Pouille is scheduled to meet Kevin Anderson—with three wins since the US Open—or Dominic Thiem—just one win since the Davis Cup in September, and a will-he-won’t-he be in the draw due to fatigue.

Pouille could qualify for London with a title run, but needs other results to fall in his favour, while compatriot Tsonga is a little better placed, though his third-round show-down with Goffin is crucial—Tsonga needs to make the semis.

This, though, is a draw packed with Frenchmen who, even if not making London themselves, could upset the hopes of others. Nicolas Mahut’s serve and volley tennis could well undermine Carreno Busta in the second round, while Jeremy Chardy could do the same to hopeful Bautista Agut. Also in good form are Gasquet and Mannarino who, by denying others, could play their own part.