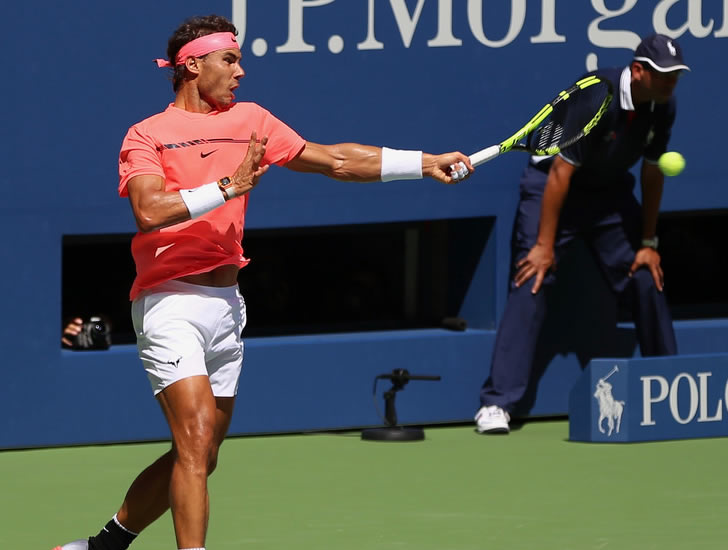 Rafael Nadal in action at the 2017 US Open Photo: Marianne Bevis

Rafael Nadal is set to become the year-end No1 for the fourth time in his career.

With his victory over Hyeon Chung in the second round of the Rolex Masters in Paris Bercy yesterday, the Spanish star ensured he could no longer be overtaken by anybody for the rest of the season.

In doing so, Nadal has set not just one but a handful of new records—and not for the first time in an extraordinary year of resurgence from injury in 2016.

The 31-year-old is the oldest man to end the year at No1 since the official rankings began in 1973.

Nadal is the first player to hold, lose and reclaim the year-end No1 on three occasions: He also ended the year as No1 in 2008, 2010 and 2013. That makes him the first player to finish at No1 four times in non-consecutive years, and the first to regain the top spot after four years.

And finally, the nine-year gap between his first No1 season in 2008 and his last is also a record.

Add into the equation that he made the biggest single-season jump in rankings to reach No1 since Andy Roddick rose from No10 to the top at the end of 2003, and Nadal’s achievement is all the more impressive. The Spaniard began 2017 ranked No9 after wrist injury forced him off court between Roland Garros and the Olympics in Rio, and then after his opening-match loss in Shanghai until Brisbane this January.

Simply achieving the year-end No1 four times puts Nadal among elite company. The only other men to match or exceed this are Pete Sampras, six times, Jimmy Connors and Roger Federer, five times apiece, and Ivan Lendl, John McEnroe and Novak Djokovic, also with four No1 finishes to their seasons.

After such a tough 2016, Nadal’s comeback has been a headline writer’s dream. First came a dramatic five-set final against old adversary Federer—himself fresh back to the tour from surgery and a six-month absence. Between them they beat six top-10 opponents, Federer eventually topping Nadal after three hours and 38 minutes.

Nadal went on to make the finals in Acapulco and Miami, and then began ticking off record after record through the clay season. He overtook Guillermo Vilas’s Open era record for clay titles by winning his 50th overall and a record 10th at the Monte Carlo Masters—the only man to win a single tournament 10 times. Until he repeated the feat at the Barcelona 500.

He then outdid even his own clay achievements by winning his 10th French Open, becoming the only man to win one Major 10 times, and the oldest winner of Roland Garros since 1972. That ensured he became one of only three men, with Sampras and Ken Rosewall, to win a Major in his teens, 20s and 30s.

Come the US Open, Nadal had already overtaken Andy Murray to become No1. He would win his third title in New York, and with it his first hard-court title in three and a half years.

His winning streak continued through Beijing and on towards another Masters final in Shanghai, where he was again beaten by Federer. But by now, Nadal was the hot favourite to carry the No1 ranking to the end of the year, despite Federer’s own surge back to form and the No2 ranking from No17 at the Australian Open.

The Swiss, now 36, has been forced to pace himself more strictly to manage his physical recovery, so he bypassed the whole clay season, and then pulled out of Cincinnati and Paris Bercy to rehabilitate a niggling back problem after winning his home tournament in Basel.

The Swiss admitted after winning in Shanghai that his priority was to be fit for the World Tour Finals rather than go flat out in pursuit of the No1 ranking.

He added after Basel: “I’d like to be fully fit for London and for 2018. I did think about the ranking but I’m so far back in the points race that it was almost out of the question…

“[Rafa] deserves that spot. He got great results also this year and played more than me.”

With Nadal headlining in Paris—where, incidentally, he is also favourite to win his first title—it was then only a matter of time, and perhaps appropriate that the Spaniard sealed the deal in the city that has been the site of his most famous achievements.

“I’m very, very happy for everything. It has been an amazing year. One year ago, for sure I never dreamed about being world No1 again at the end of the season. It’s something that means a lot to me. But the season is not over.”

For records could still continue to fall at the feet of Nadal this year. Should he go on to win his first title in Paris Bercy this week, he will move ahead of Djokovic to score a record 31st Masters title.

If he goes on to win in London, he will claim the elusive World Tour Finals title for the first time. So no, the season is certainly not over.

Nadal will be presented with the ATP World Tour No1 trophy at the Nitto ATP Finals at the O2 later this month.