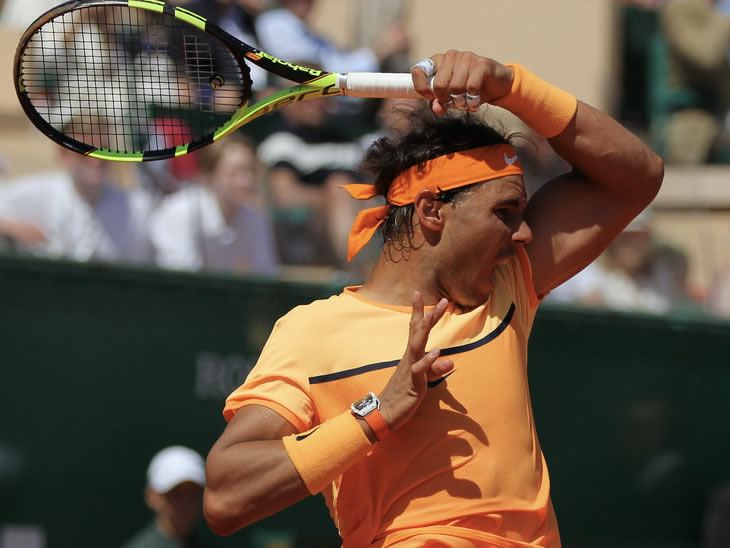 Rafael Nadal will be the new world number one next week Photo: Marianne Bevis

Montreal’s gain has become Cincinnati’s loss as the Western and Southern Open’s seven-time champion Roger Federer announced today that a back injury he picked up in the final of the Rogers Cup on Sunday has forced his withdrawal from one of his most successful tournaments.

Federer had not played the Canadian Masters since 2014, and had not played in the Montreal leg since 2011, and he delayed his decision to play there this year after winning back-to-back titles in Halle and Wimbledon. But after a short holiday with his family, the Swiss decided to cut short his training in favour of playing his eponymous Masters.

He turned 36 on the day before his first match, and fitted in two late nights at Coldplay concerts—the band’s world tour hit Montreal last week—but also admitted after his opening matches that he had found the transition from grass to the city’s hard courts a challenge.

He went a set down in this third-round encounter against David Ferrer, and was on the back foot almost from the start of the final against in-form Alexander Zverev. By the fourth game of the second, it was clear that Federer’s serving and overall movement were compromised.

Not surprisingly, he afterwards flagged up his uncertainty about playing Cincinnati:

“I’ll travel to Cincinnati tonight, then take a decision in the next couple of days… Felt all right all week, had a bit of muscle pain, aches and pains here and there, just because it’s back on the match courts, on the hard courts. After vacation and practice, it’s always a bit of a shock for the body. We’ll have to wait and see how I feel in the next couple of days.”

It did not take a couple of days: Federer announced his withdrawal in Cincinnati early Monday.

“I am very sorry to pull out of the Western and Southern Open as I always enjoy playing here. It has some of the best fans in the world and I am sorry I will miss them. Unfortunately, I tweaked my back in Montreal and I need to rest this week.”

Federer was also unable to defend his title there last year having withdrawn from the entire 2016 season following Wimbledon. He could thus have chased down Rafael Nadal in the rankings this week had he won the Ohio title, because the battle for No1 came down to these two men after Andy Murray pulled out of both Montreal and Cincinnati to rehab a hip injury.

As it is, Nadal is guaranteed to regain No1 next week for the first time since July 2014, and will be one of the favourites to take a substantial lead in the rankings in the absence not only of Federer and Murray but also Novak Djokovic, Stan Wawrinka, Marin Cilic and Kei Nishikori—all of them injured.

It just so happens that Nadal reached No1 for the first time in his career at the same tournament in August 2008. Since then, he has accumulated 141 weeks at the top via three separate stints, and he will now also be assured of the top seeding at the US Open.

The big question will be whether it is Murray or Federer who nabs the No2 seeding in New York. They will be separated by just five points, and Federer’s withdrawal ahead of Cincinnati sacrifices the 10 points he could have earned from his first-round bye. Those points would have taken him past Murray before New York, but now, if Murray is fit to play the US Open, the Briton will be the No2 seed.

Federer can still displace Nadal at No1 later this year, as the two compete for the prestigious year-end No1 just as Murray and Djokovic did in the latter stages of 2016.

The Swiss, who has notched up a record 302 weeks at the top, last headed the rankings in November 2012, and if he does reclaim No1, he will become the oldest in the Open era to do so.

In the Montreal press conference following his loss to Zverev, Federer admitted that his ideal would be to end the year as No1:

“Year-end if I could choose, yes. It would mean more. Then I could be on vacation with No1—[smiling] not a bad thing!”

For now, Nadal can take on his tough draw in Cincinnati—beginning with the likes of Richard Gasquet and Gilles Muller—in the knowledge that he will top the charts no matter whether or not he exceeds last year’s third-round run. His outstanding results of 2017—titles at Roland Garros, Monte-Carlo, Barcelona and Madrid, and finals at the Australian Open and Miami—have already achieved his very special milestone.