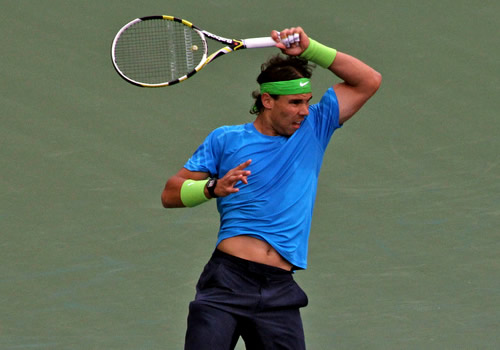 The score stood at 3-3 in the first set, and the No2 seed, Rafael Nadal faced break point. And just as he went through his usual complex pre-serve rituals, he was issued a time violation warning.

It was not the first time at this week’s top-quality China Open, played at the very venue where Nadal won Olympic gold in 2008. Indeed the Spaniard had given up a first serve for two violations during his first match. But if you want an example of this man’s mental strength, here it was.

Nadal paused not a moment mid bounce, delivered a huge swinging serve, and saved the point.

His struggles continued, with his underdog opponent, Martin Klizan, attacking like a man possessed, chasing down drops and lobs and forehands to work two more break chances, and each time Nadal came up with just a bit more to hold.

By 4-4, the No56-ranked Klizan had dropped just three points on serve, giving Nadal a taste of his own left-handed, top-spinning, wide-kicking medicine. And he kept up the pressure, pounding wide to Nadal’s backhand wing to draw three errors and two more break chances. The Spaniard hit a forehand into the middle of the net and Klizan had the lead.

Perhaps it was not so surprising that Nadal found himself in this position. A glance at the results of their only two previous matches revealed that this same opponent had taken the first set in both: in the second round at Roland Garros in 2013 and the first round at Wimbledon this year.

In March, Klizan also became the first qualifier in almost a year to win a main-tour title—Munich—beating top seed Fognini and seeds No2 and 3 in the process. It earned him one of the biggest surges in the rankings this year, from 108 in February.

But when the going gets tough, as the saying goes, Nadal gets going. Klizan played a little too cautiously in attempting to serve out the set, Nadal pounced to break back, and then pressed home his advantage with a love hold.

Suddenly, all the pressure was on Klizan. And although the Slovak forced a tie-break, and fended off three set points, it was with a certain inevitability that the irresistible force of Nadal would win through, 7-6(7).

Klizan had actually won more points in the set, and he must have wished he had produced one of the string of winners he made in the opening game of the second set a little sooner.

He held with his 15th winner of the match, and continued the purple patch to earn break points against Nadal, but yet again the Spaniard delivered when required, found some big serves, and then rode his aggressive comeback to break Klizan.

But the Slovak now showed that he too could get going when things got tough: He broke, and powered his forehand through Nadal to hold for 5-4. And now Nadal’s mental fortitude was tested anew, this time a second time warning and thus a first-serve penalty—on break point for the set. A forehand wide, and Klizan was level, 6-4.

Even now, the safe money would have been on the mental and physical stamina of Nadal to pull this match out, but it was he who had to find some truly astounding defence to hold off an early break with a high backhand volley of the most acute possible angle. Meanwhile Klizan was hitting serves and forehands that had the crowd gasping.

Against the run of play, the first break of this decider went against the Slovak—but how did he respond? With Nadal-like determination. He broke back to love, making with three straight winners and then a blistering return of serve to draw the error.

A minute or two later and he had hit three more winners to hold to love, and minutes after that, he stood at 40-0 on Nadal’s serve, breaking to 15. Klizan’s winners piled up, and against the speed and defence of Nadal, that is an extraordinary achievement, and was nothing short of exhilarating to watch.

Could he serve it out this time? The answer was short and sweet. With his 16th point of the last 18 played, he made it 33 winners to Nadal’s 21, and confirmed his place in the semi-finals, 6-4.

It’s hard to believe that Klizan almost went out of the tournament in the first round of qualifying, and then that he survived his opener in the main draw against Leonardo Mayer, 7-6, 6-7, 6-4. What a blessing it must have been to see No7 seed Ernests Gulbis retire in his quarter-final—and what a wonderful display he went on to produce—both mental and physical—against one of the most resilient men in tennis.

Klizan now goes on to face Tomas Berdych in the semis. Expect some big firepower, though their contest will have to produce something very special to out-do this one.