Rafael Nadal readies for Ronaldo poker ‘duel’ – with some Q&A on the side!

Rafael Nadal responds to some #AskRafa tweets from fans 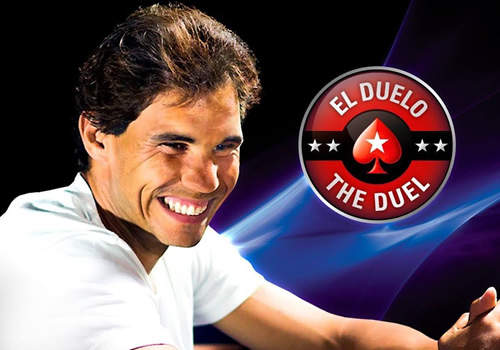 Fans of Rafael Nadal had a chance to catch up with their hero—this time away from the tennis court—when he took on ‘The World’ in an online poker challenge.

Nadal is set to play fellow PokerStars ambassador, Brazilian football legend Ronaldo, in a live head-to-head match—dubbed ‘The Duel’—in London on 6 November, and he warmed up by pitting himself against all-comers both on the poker table and on Twitter.

The Grand Slam champion has proven himself to be a dab hand at poker: In three previous contests, he had beaten ‘The World’, and it’s easy to see why.

This was a Nadal far removed from the intense, deadly serious man who takes on the opposition with his tennis racket. In front of the computer screen, he did not take the smile off his face for the entire hour that he exchanged banter with his co-host while simultaneously played an ever-changing array of opponents.

Apart from personal pride, though, Nadal did have another incentive to do well: a $100 donation to Care International for every point he scored—though on this occasion, he cam out the loser.

Along the way, he also managed to field, in English, a few of the hundreds of #AskRafa tweets that plied his timeline—though in truth, the mind of the multi-tasking Nadal was elsewhere!

So what did we find out?

“I am starting an academy in Majorca, which will be ready in a year and a half. And I have different things I want to enjoy, different experiences. I’m lucky to have a father who is always helping me to plan things for the future: I’m not a person who will do nothing. But at the moment, I am enjoying my tennis career.”

The importance of big rivals?

“Final of Wimbledon 2008” [He beat Roger Federer in five sets in one of the most famous matches between the two superstars.]

“Every Grand Slam I won was very emotional for me, and a few Masters… it’s difficult to say one. But I say always feel Roland Garros is more special than any other… nine is much more than I ever dreamed.”

One part of your game you wish you could improve?

“The serve. It is a very important part and can make a big impact. Playing with a serve like mine, you have to play a long time, and under a lot of pressure. I have tried my whole career, but you have some things that are more natural and some more difficult, and serving was a bit tough for me. I think it has improved, but…”

And the hardest serve to face?
“Ivo Karlovic.”

Who would you pay to watch play?

“Federer against Djokovic… Yes, I did see them in Shanghai: Roger was playing really well.”