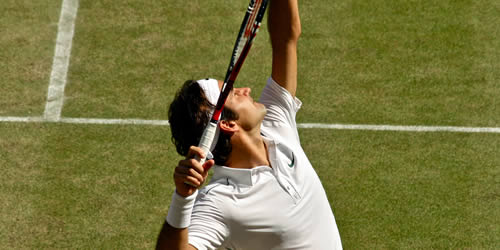 They have played one another 28 times and have, still, the most electric rivalry of the last decade.

So the Gerry Weber Open—the younger upstart in the immediate grass aftermath of the French Open clay—scored perhaps the biggest coup of the year in bringing the Roger-and-Rafa roadshow to the same 250 event for the very first time.

With Novak Djokovic opting out of any tournaments ahead of Wimbledon—he will only play a couple of exhibition matches next week on the grass of the Home Counties—and the other member of the top four, Andy Murray, falling in his first match at this week’s other grass event at Queen’s in London, the German director, Ralf Weber, appeared to hold all the aces for the 20th anniversary of his tournament.

Federer’s presence in Halle was no surprise, though. He has favoured this quiet corner of East Westphalia ever since he reached the quarter-finals at his first attempt back in 2000. Now making his 10th appearance, he has won the title five times and was runner-up to Lleyton Hewitt in 2010.

The Gerry Weber Open, with some very early prescience, signed up the teenage Federer long before he became a tennis superstar. And as Ralf Weber said last week: “Roger is a piece of good fortune for us. Who would have ever guessed this personal development when signing him on for the first time?”

At Halle in 2003, the Germans’ faith in Federer was repaid with his first title in there and, three weeks later, his first Wimbledon crown.

Weber affirmed that “Federer’s first tournament win contributed to our international approval among the tennis pros” and Federer agreed:

“We are all a little bit superstitious and before then, all that had been talked about was Queen’s. My colleagues realised that you could prepare yourself in Halle perfectly fine. I love coming to Halle, in between the metropolitan Paris and London, to quietly get ready for Wimbledon.”

Indeed so wedded to Halle is Federer that he has a lifetime contract with the tournament for as long as he plays at Wimbledon. And so wedded to Federer is Halle that the approach road to Gerry Weber Stadion has been renamed “Roger-Federer-Allee.”

The Nadal relationship with Halle has been altogether different. His only previous visit to the tournament, as the new name on everyone’s lips, was in 2005. He had just won six tournaments, two of them Masters and one the French Open, but on Halle’s grass, he lost in the first round.

Since then, Nadal had used the bigger, older, London-based grass of the Queen’s Club for his Wimbledon preparation—missing it only once due to injury. So tempting him to switch to Halle—and confrontation with Federer—was arguably an even bigger feather in the German tournament’s cap.

There’s no denying, though, that the Nadal decision was helped by financial considerations. After Queen’s last year, he complained that British tax laws—which took a percentage of overseas performers’ global endorsements as well as prize money—made his visit to the tournament almost worthless. With Halle offering more appearance money—and, with a 28-man draw instead of 56, the chance of similar ranking points from fewer matches—it came as no surprise that he should defect. And he did so with a three-year deal.

In a nice piece of timing, Nadal’s win at Roland Garros left him poised to break the $50 million mark in prize money—rubbing a little salt into the Aegon Championships wound of rain and falling seeds this year.

For there was perhaps one more reason why Halle wooed not just Nadal and Federer but also world No7 Tomas Berdych and five more top-30 players. Its centre court is one of the rare grass courts in the world to boast a roof—and in this summer’s rain-battered Europe, that has been one more blessing for the tournament.

The day’s line-up, though, had been opened with the pairing of two unseeded players, Mikhail Youzhny and Radek Stepanek. The 29-year-old Russian came off the better in a marathon three-setter to keep alive his hopes not only of a second title this season but of his first ever on grass.

The top three seeds kept up their side of the bargain in their first matches, winning through to the quarter-finals to set up a guaranteed barn-storming line-up for its Friday schedule. But the tournament’s advertising poster that boasted images of the Roger Federer and Rafael Nadal alongside the logo “The Duel” proved rather less prescient than Weber had hoped.

Nadal was lined up to meet the popular defending champion, German Philipp Kohlschreiber, who won two close tussles in the first two rounds.

Kohlschreiber had never beaten the Spaniard in eight meetings but he had certainly tested him—most recently in their three-setter in Doha this year. He taxed him again this time, taking the opening set with some speed, but things looked back on an even keel when Nadal earned three break points early in the second set.

However, the German, who won 27 of his 30 first serves, saved all three of them and never faced another. He broke Nadal and served out his first victory over the Spaniard in just 86 minutes.

It took Kohlschreiber through to his fifth semi-final in Halle but put an end to any chance of a Rafa-and-Roger final. Would Federer make it where his rival could not?

He had reached the quarters by beating No29 Florian Mayer in straight sets, firing 11 aces and saving the only break point he faced. His reward was a third meeting this year, to complete the set of hard, clay and grass courts, against one of the most dangerous young players on the tour. At a career-high ranking of 22, Milos Raonic pushed Federer to three sets in both those previous matches.

Just as in those other meetings, Federer lost the opening set in a tie-break despite superior serving stats but then pulled back to level in the second. The third was on a knife-edge throughout, neither man earning or facing a break point. It came down to another tie-break, and this time Federer served slightly the better to take the set with only one more point than his opponent.

Berdych, like Nadal, faced a big favourite with the German crowds. Tommy Haas, the 2009 champion, rewarded the tournament’s wild card by beating No6 seed Marcel Granollers to set up his quarter-final.

After years of injuries, resulting in surgery more than once, the stylish tennis of the 34-year-old Haas has begun again to earn some success. This week found him inside the top 100 for the first time in two years, and he was down at 896 as recently as a year ago.

Having run the gamut of qualifying rounds in Paris to reach the third round, Haas earned a wild card to Wimbledon but before that, he had to deal with another former Halle champion in Berdych, the winner in 2007. They hadn’t played each other in nearly six years but each of their three matches went to final sets.

Win or lose on this occasion, the sentimental vote from the home crowd would undoubtedly be for the German hoping to win his first title since he last won in this very venue.

Whether Haas can take his place in a very rare line-up in modern tennis remains to be seen. If he does, every one of the four will wield a single-handed backhand. And what better way could there be to celebrate the arrival of the grass-court season? Congratulations, Halle.