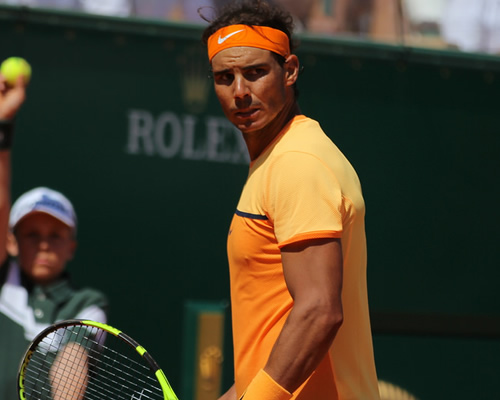 Naturally the euros and the points on offer on the final day of the Monte-Carlo Rolex Master were important, but for Rafael Nadal, this represented a whole lot more.

For it had been a while. The clay-court maestro, owner of 47 titles on the red stuff, owned a remarkable nine French Opens, seven Rome Masters, four at the Hamburg/Madrid Masters, and eight at the glamorous MCCC on the edge of Monaco, had not added to his tour-leading 27 Masters tally on any surface for two years. So long ago, indeed, that the world No1 Novak Djokovic had piled on 10 titles to overtake him in Miami two weeks ago.

At this particular tournament, it had been even longer since victory. After dominating the Mediterranean Court Rainier for eight consecutive years until 2012, Nadal made the final in 2013, the quarters in 2014 and the semis last year, beaten twice by Djokovic himself.

It proved to be the same at the French Open, with Djokovic beating the Spaniard there as well as Monte-Carlo. It looked as though Nadal’s grip on clay was being loosened—until this week.

With Djokovic enjoying family life down the road from the Club after an opening loss, Nadal was back into a remarkable 100th final, his 42nd Masters final, his 56th clay-court final, and his 10th Monte-Carlo final.

Until now, though, there had remained a small question-mark alongside the mighty Spaniard’s name. It was understandable that he was finding wins over Djokovic hard to come by, for few have got the better of the world No1 in the last couple of years. But Nadal had suffered a few unusual losses, even on clay.

Certainly illness and injury in the latter stages of 2014 did not help. However his return to clay as defending champion in the Rio 500 last spring ended at the semi-final stage against Fabio Fognini, who also cut him short in the third round of Barcelona. This spring, he lost in Rio to the No45-ranked Pablo Cuevas and in Buenos Aires to Dominic Thiem.

He arrived in Monte-Carlo, then, without a title since Hamburg last summer, but this week had overcome a tough draw: Thiem, then French Open champion Stan Wawrinka, followed by No2 seed Andy Murray. There had been, without a doubt, flashes of the old Nadal, though he was determined to downplay such talk: “I don’t want to talk every day about if I am back or I am not back. I am what I am today. I’m in the final of Monte-Carlo. That’s great news…”

First, there was the question of winning again, and to do that he had to overcome one of biggest but most unpredictable talents on the tour, Frenchman and No13 seed Gael Monfils.

The 29-year-old Monfils, a player who has veered perhaps too often toward entertainer rather than winner on a tennis court—and owner of a super-athletic body that has been prone to knee and other injury problems—had been as high as No7 in 2011 and could break the top 10 for the first time since with a win here.

Monfils was twice a Masters finalist in Paris, and last year upset Roger Federer to reach the semis here. There was, it seemed, a new resolve and focus about him this year, too, and he had reached the final without dropping a set—indeed no more than six games in each of his last four matches.

Yet he had only ever won two matches against Nadal in 13 attempts, and never so much as won a set from him in four clay matches. Could he possibly break the near stranglehold of ‘the big four’ at Masters level and score his first here?

It proved to be a lung-busting opening set lasting an hour and a quarter, and with twists and turns not just on the clay dust but on the scoreboard.

Nadal came under pressure first as he fought off a break point in the third game.

Eighteen minutes in, though, and he made the first break, 3-1, only to immediately double fault and offer three break points: He put a backhand wide.

Now Monfils faced break points, but cracked open some big serves and his signature flat forehand from the baseline, followed by a cracking cross-court backhand: 3-3.

Long, long rallies and games continued through another break on each side, Monfils facing and saving a third match point courtesy of a 33-stroke rally. Both struggled for breath, but fortunately the crowd’s roars gave them time to recover. Monfils threw in a first serve and volley, Nadal a drop winner, and the Frenchman a backhand winner. It took eight minutes, but Monfils held for 5-5.

However, he could not stem the Nadal onslaught in the 12th game, and on the fifth set point, double faulted. The eight-time champion was a set closer to his ninth title, 7-5.

Hard as it was to believe, the second set was just as long with even more twists in the scoreline. This time Monfils broke first, survived three break-back points and led 3-1. Now Nadal survived another break point and broke Monfils to love, the first of three straight breaks: They stood gridlocked at 5-5, but unlike the first set, it was Nadal who blinked, on the fourth break point of an eight-minute game. Monfils served out the set, 7-5.

But a second change of clothes for Nadal, and some attention to the plaster on his finger, and he began the decider the fresher, held, made a quick break, held again, and so on. The energy and will drained from the Frenchman, and as if to add the cherry to the icing on the cake, Nadal sealed the set and match, 6-0, with his famous running forehand down-the-line winner.

Nadal fell to his knees, then ran to his box to embrace teary girlfriend, Maria Francisca. For make no mistake, this was a statement of intent by the ‘king of clay’ after many trials and tribulations, and as a result perhaps one of his most emotional victories.

The figures bear repeating: A record-equalling 28th Masters; A record ninth Monte-Carlo Masters; His 68th title and his 48th clay title—which is just one short of Open clay record held by Guillermo Vilas.

Figures guaranteed to boost the one thing that went missing after injury and illness: Confidence—a prime commodity just five weeks before his beloved French Open.