Marianne Bevis takes a look back at Rafael Nadal's turbulent 2012, and examines his chances of returning before 2013

These are testing times for one of tennis’s most intense and most intensely followed men: Rafael Nadal.

He has the kind of physical presence, unbreakable will and warrior spirit that would have made him a champion in whatever sport he chose. Nadal chose the gladiatorial, one-on-one, fight-to-the-death, energy-sapping sport of tennis. That he happens also to be blessed with glowering good looks and a boy-next-door charm has ensured the status of superstar. 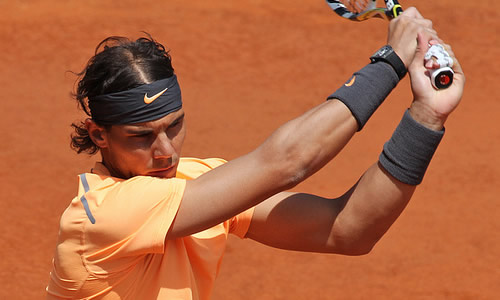 So Nadal’s absence from the courts, from the big-time draws and from the rivalries that have made men’s tennis one of the most compelling sports of the last decade, has become the unexpected talking point of 2012.

And, with an unkind symmetry, No4 is currently where Nadal finds himself in the rankings for the longest stretch since he became No2 in June 2005.

For Nadal has not played a single match since losing a long and intense five-set battle to Czech Lukas Rosol in the second round of Wimbledon in June.

First, he pulled out of the Olympic Games, where he was to carry the Spanish flag at the opening ceremony, with what was thought to be a recurrence of the tendinitis that had intermittently affected his knees.

Then he pulled out of the US Open to continue treatment on what was now described as a partial tear of the patella tendon and inflammation of the Hoffa’s fat pad.

Then during the tournament, he revealed that he would miss much of the autumn to rest and recuperate: “I feel better after the meeting with my doctors and happy knowing that the evolution of the past weeks has been positive and surgery has been avoided. I will continue to work with the plan my doctors have established to be able to compete as soon as possible.”

Now, Nadal has shed doubt on whether his return will come before the year is out. Talking to selected media this week in Madrid, it was clear that “doubt” was the operative word.

He began with the Davis Cup final, saying to Reuters: “If things go well and I can make the final and the captain thinks I am the right person to play it, then I’ll be there. If not, I’ll be supporting the guys from afar.”

Spain will be competing for their fourth Davis Cup title in five years in less than seven weeks’ time but bearing in mind that Nadal is still undergoing intense physiotherapy and strengthening work without going near a tennis court, his chances of facing the Czech Republic—especially away from home on what are unlikely to be clay courts—seem negligible, especially in the light of other comments to the Daily Mail.

“I hope you see me in Australia. That is the biggest goal for me, to come back just before then in Qatar, but I cannot say for sure it is going to happen.

“The only thing is to recover well. I want to be 100 per cent when I come back. I don’t want to keep playing every day with doubts, not knowing if my knee is going to answer all the questions.”

That, then, was the teasing timetable—not intentional, of course, but leaving room for considerable uncertainty about when he will return.

What does seem certain, however, is that Nadal will not feature at the World Tour Finals in London despite qualifying, back in July, for the eighth straight year.

It is a title he has never won and an event that has never seen his best. Even in the year that he dominated almost from start to finish, 2010, his body simply could not carry him over the winning line. For while he revels in the clay and can adjust to the forgiving grass, the physical nature of Nadal’s game has always struggled with the unforgiving hard courts that dominate the calendar—especially in the last months.

“I think tennis is a very aggressive and demanding sport and obviously the knees suffer above all when you are playing on hard courts.

“The reality is that at the age of 26 and after a career of more than 10 years, with very good results, it has been my good fortune that my knees have not prevented me competing at the highest level for many years. I hope that when I return they don’t hinder me.”

It is, indeed, easy to forget for how many years and how many matches—more than 700 on the main tour alone—those powerful Spanish legs have pounded the world’s tennis courts.

He won his first ATP match in 2002 before he was 16 and then cut a career-announcing swathe through the year’s Futures circuit: a 37-3 winning run that included six titles and a year-end ranking of 200.

2003 was the year of Challengers—two titles from six finals—and his debut, aged 17, in Grand Slam tennis, reaching R3 at Wimbledon and R2 at the US Open. He twice beat top-10 players and ended the year at 49.

At 18, in 2004, he won the key singles rubber in Spain’s Davis Cup title-winning victory over the USA and reached two ATP finals, winning his first title in Sopot.

Still a teenager in 2005, Nadal transitioned into the big time like few others have done. He won his biggest annual tally of 11 titles, including his first Grand Slam in Paris and four Masters—in three different environments—to end the year as No2. In any other decade, he would quickly have become No1 but instead he encountered the glass ceiling of Federer and stayed in second place for more than three years.

2006 brought five titles, his first Wimbledon final and an Open Era record of 62 straight wins on clay. There were six more titles in 2007.

In 2008, he won eight, including his first Wimbledon, Olympic gold and with it the No1 ranking for almost a year. He ended the year with an ATP-topping 82 match wins and 93 matches. 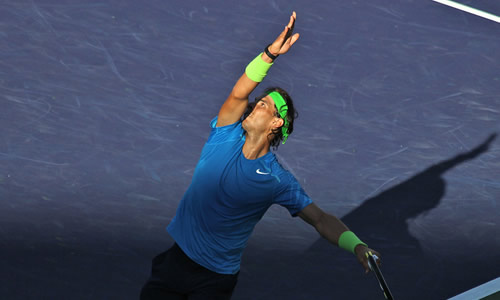 The next year brought a first Australian Open title but also his first extended absence—nine weeks—with knee problems after his one and only loss at the French Open. Yet he bounced back in 2010 with possibly his finest season, winning three Grand Slams and another year stretch at No1.

Now, though, he confronted another man for supremacy as Djokovic put together one of the all-time great seasons in 2011. Even so, Nadal reached 10 finals, three of them Grand Slams, winning the French Open.

But by the end, he was weary and failed to make the semis of the World Tour Finals. It was clear that he was discontent: “We can find excuses, we can find problems for more time, but is not the moment to say that.

“Is the moment to still fight? Is the moment to say the season is over? I had good season. I’m happy for that. I’m not happy about a few things during the season. This end of the year wasn’t easy for me: That’s hard to accept. But at the same time it’s given me a little bit more goal for the beginning of 2012.”

And he did not let his fans down. First he played almost to the death in the longest Grand Slam final—five hours 53 minutes—to lose to Djokovic in Melbourne. He reached the semis of both the hard court Masters in North America though he had to pull out of Miami with a knee problem.

Back on clay, he won four titles, beating Djokovic in the finals of Monte Carlo, Rome and Roland Garros, his record seventh French title.

But trouble was brewing, though Nadal has only now revealed to what extent: “Was it a mistake to play at Wimbledon? Maybe, but when you are playing well it is hard to stop. At Roland Garros I had to play with anti-inflammatories to get through. After that I felt really bad. My practice before Wimbledon was terrible. I played the first round with injections, otherwise it would have been impossible. That doesn’t help the knee.”

It places his back-breaking—and it transpires, knee-breaking—loss to Rosol into a new light. It also explains why Nadal is being extra-cautious about a winter return.

“We’ll see how things develop in the next few weeks but my priority is to recover well: not quickly but well. Obviously as soon as possible but the main thing is to have the certainty that you are fine when you do return.”

Should he never pick up a racket again, his place in tennis history is assured. With 50 titles, 21 of them Masters and 11 Grand Slams, plus a 20-1 Davis Cup singles record, he has nothing to prove. However, tennis would lose one its most vivid flames.

There is no danger of the spark being snuffed out just yet, though: “I am 26 years old and I am confident I have plenty of years ahead.

“What I want is to recover well and to continue enjoying tennis and competition, which is what make me happy right now.”