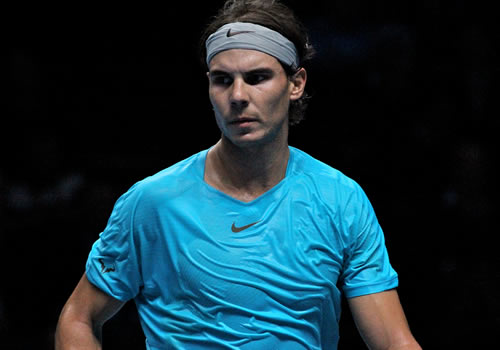 With a final run in Beijing last week and semi-final finish in Shanghai this week, Rafael Nadal has risen two more places in the Race to London during the Asian swing to confirm his place at the ATP World Tour Finals.

And although Nadal replaced Tomas Berdych at No5 this week, the big Czech star has also sealed his place in London after his quarter-final finish in Shanghai.

With the top four places confirmed earlier this season by Novak Djokovic, Andy Murray, Roger Federer and Stan Wawrinka, there are therefore just two slots remaining among the elite eight, plus two ‘reserves’.

For Nadal in particular this has been a primary target of his 2015 season. Having missed the World Tour Finals four times in the last decade with injury, including last year, he has battled hard to return to his old form and fitness after wrist and back problems combined with an appendectomy brought a premature end to his 2014 season.

He went on to make some unusually early exits in tournaments that he has dominated for years, such as Barcelona and the Rome Masters, failed to win the French Open for the first time since 2009, won just one match during the grass swing and only five through the US Open Series.

China, however, boosted both the Spaniard’s confidence and his ranking, and brought his first top-five win of the year, over Wawrinka, which also happened to be his 300th win at Masters level. Now Nadal returns to the season finale, one of the few big tournaments he has yet to win, for the 11th consecutive time.

The 30-year-old Berdych will make his sixth consecutive appearance at the O2, where he reached the semis in 2011.

One of the most consistent performers on the tour, Berdych made the semis of the Australian Open at the start of the year and reached at least the quarter-finals of seven of the eight Masters played so far. He made the finals in Monte-Carlo, Doha and Rotterdam, and won his first title of the year in Shenzhen a month ago.

As a result, in May, Berdych broke into the top four for the first time after more than four years in the top seven—aside from a slip to No9 for three weeks at the start of this year—and is still at No5 in the rankings, despite conceding a spot to Nadal in the Race.

The biggest rise of the week, however, has been made by 30-year-old Frenchman Jo-Wilfried Tsonga. By reaching the final in Shanghai, via victories over the likes of Tommy Robredo, Kevin Anderson and Nadal—three-setters, all of them—he has reached No9 in Race.

Tsonga has made the year-end championships just thee time before. The first was back in 2008, the year he burst onto the big stage with a final run at the Australian Open when still ranked around 40 in the world and ended the season with his first Masters title. In 2011, he beat Federer to reach the Wimbledon semis but went on to lose the title match to the Swiss at the O2. And Tsonga’s last qualification came three years ago in the season he reached a career-high No5.

Since then, injury has marred his chances. He missed the entire North American swing in 2013, including the US Open, and he ended last year with another injury that lingered through the opening tournaments of this season. All the more impressive, then, that he is within striking distance of qualification after making the semis at Roland Garros, the quarters at the US Open, and winning his first title in over a year in Metz.

Tsonga does remain almost 1,000 points behind No8 in the Race, David Ferrer, and behind the Frenchman are six men separated by fewer than 445 points—that’s the equivalent of a win in Vienna this week or Basel next, and thus well within reach with a final run at the last Masters of the year in Paris.

However, while the maximum possible points any one player can add is 2,000—by winning the two ATP500 tournaments in Vienna and Basel plus the Paris Masters—only two men in the chase are scheduled to play all three. And in any case, scoring maximum points will not be entirely ‘profit’: All the top men are playing Paris, and most of them are playing another event, too.

The window, then, is, closing rapidly, as the current state of play makes clear.

The race to the ATP World Tour Finals