Rally for Bally: One year on, Andy Murray again plays for friend & charity 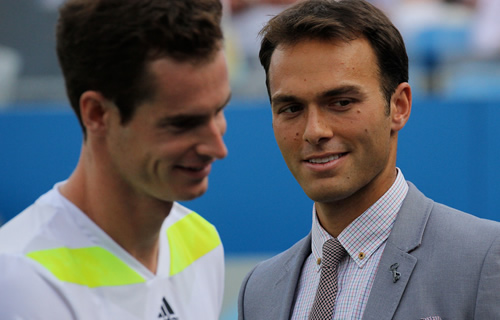 It was exactly a year ago that Andy Murray took to Queen’s Club’s Centre Court to play an exhibition match for the Royal Marsden Cancer Charity.

He had just won his third title at the famous venue, but then threw his heart and match-weary body into a campaign very dear to his heart.

In the last week of 2012, Ross Hutchins had told his close friend Murray that he had been diagnosed with Hodgkin Lymphoma. The British doubles specialist then began chemotherapy at The Royal Marsden, an organisation he went on to describe as his ‘second family’, and Murray wanted to highlight its great work and contribute to it in some way.

Thus came about Rally Against Cancer, a week of fundraising at last year’s Aegon Championships culminating in an all-star charity match held after the final. Murray and Tim Henman teamed up to take on Ivan Lendl and Tomas Berdych before playing a fun match with celebrities including Boris Johnson, Richard Branson and Jonathan Ross.

Little did any of those involved think that this year they would be back to highlight the work of the Royal Marsden for another reason.

Former British No1 Elena Baltacha announced in March that she was being treated for liver cancer, but died on 4 May.

She had retired from tennis last November having reached a career-high 49 in 2010, despite a career spent battling more than her share of illness and injury. Age 19, she was diagnosed with the chronic fatigue disease sclerosing cholangitis and had liver-associated surgery in 2003. She then had keyhole surgery for a prolapsed disc in 2006 and foot surgery in 2012.

The Rally for Bally fundraising event was set up by her friends before her untimely death, but the events scheduled to take place at the three Aegon tournaments in London, Eastbourne and Birmingham later today, will go ahead in her memory.

All the funds raised will be split equally between the Royal Marsden Cancer Charity and the Elena Baltacha Foundation, the charity attached to the Baltacha’s Academy of Tennis which she set up to help children from all backgrounds play tennis.

At Queen’s, where Hutchins is now tournament directory, the now-in-remission Briton will lead “Team Ross” against “Team Andy”, and will be joined by Victoria Azarenka, who has been practising at the Club this week, Wimbledon champion Marion Bartoli, 15-time Grand Slam champion Martina Hingis and Britons Heather Watson and Laura Robson.

The kindness and courage of ‘Bally’ has been recognised by all who came into contact with her, and friends and colleagues throughout the tennis family have been sporting the yellow ‘Rally for Bally’ wrist bands.

Hingis said: “The loss of Elena was very sad and it touched everyone inside and outside of tennis but it’s great that everyone in her sport is pulling together like this. It’s the perfect way to remember her and also to raise money for causes that mattered to her.”

Azarenka added: “Elena was one of us. I will always remember our matches, what a fighter she was and how much she loved tennis. We will always miss her. The whole of the tennis world is together in the Rally For Bally, to try to raise as much money as possible for the Academy that she was so passionate about, and to fund the on-going fight against cancer.”

Bartoli, who had known Balthacha for 15 years, told The Independent this week: “I will always remember the chat we had together before Wimbledon started. It was in Eastbourne and Bally really gave me this extra boost to just enjoy it more on the court.

“She helped me to put tennis more in perspective—to put happiness first… Of course we spoke about girls’ stuff, hair colour and whatever. But that was who she was: trying to help me just to be happy.”

In Eastbourne, at the Aegon International, Petra Kvitova and Agnieszka Radwanska will be joined by another former British No1 Greg Rusedski and Hutchins doubles partner, Colin Fleming.

Money from the resale of tickets at the Aegon International event is also being donated to the fund that, by the end of 2013, had raised £276,323.

Donations can be made on the Rally For Bally JustGiving page at: www.justgiving.com/RallyForBally

Queen’s 2014: Former semi-finalists Dimitrov and Lopez save best for last