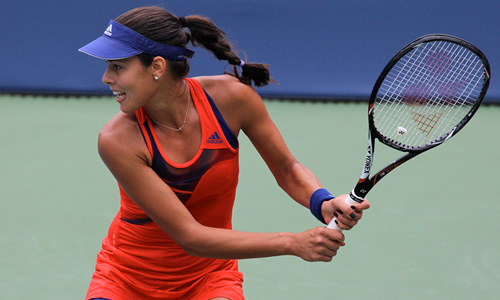 Ana Ivanovic in action at the US Open Photo: Marianne Bevis

In the world of elite tennis, six years can seem an eternity. And there have been times when it looked as though the tall, fresh-faced 20-year-old from Serbia who made such an impact almost seven years ago, Ana Ivanovic, would never recapture the form that took her to the final of three Grand Slams in the space of 12 months.

After such a season, it was no surprise to find her atop the rankings, reaching No1 as clay turned to grass in that free-hitting summer.

But Ivanovic struggled through the rest of the year, withdrawing from the Olympics with a thumb injury, unable to win back-to-back matches until late autumn, and apparently overwhelmed by the fame and attention that her looks and personality as much as her talent had attracted.

The next two years found her seesawing between finals and first-round losses, her ranking slip outside the top 20, and her confidence slide along with it. She would not make another Grand Slam quarter-final in her next 17 Majors, she changed her coach every year, and briefly dropped outside the top 60 during July 2010. And aside from Linz and the Tournament of Champions in Bali, she did not win another tournament—until this year.

Come 2014, a wiser, fitter and more confident Ivanovic has at last returned to the top flight and to her first titles in three years. Not just one title, either, but a career-best four titles from six finals, and more WTA match-wins—58—than anyone on the tour.

Her resurgent form carried her back to No5, and thus to the WTA Championships for the first time since 2008.

The signs were there at the start, with Ivanovic winning her first title in the first week of the year in Auckland, and she followed that with only her second Grand Slam quarter-final in six years at the Australian Open. What’s more, she beat Serena Williams for the first time, fighting back from a set down to do so.

In Stuttgart, Ivanovic reached her first Premier final in five years. En route she beat Julia Goerges to score her 400th career win and then No6 Jelena Jankovic for her 40th career top-10 scalp. She eventually lost to two-time defending champion Maria Sharapova in the final.

But come Rome, she gained revenge over Sharapova, her first victory over the Russian since the French Open of 2007. It made her only the second player since the start of 2012 to beat Sharapova on clay.

And it was in the Eternal City that a buoyant Ivanovic talked of her new confidence and ambition.

“I feel I am actually a more complete player [than when I won Roland Garros in 2008]. I use more variety, I come to the net more often. I just enjoy building on my game…

“I really feel I have the game to be at the top: I was No1 before, and I want to give myself the best chance to get back there. So I’m really working hard to get back. And of course to win another Grand Slam is my dream.”

She also touched on the difficulties of the last few years.

“I think women’s tennis has changed over the years, and the depth we have now compared with 2008 is much bigger. It’s a very hard road, and I’ve been really struggling the last few years, so to have this victory, I really appreciate it much more now.”

She talked, too, of how special the French Open has been to her, though her strong run through Stuttgart, Madrid and Rome did not bring her the final clay accolade in Paris in 2014. Instead, she used her retooled attacking game to win her first grass title in Birmingham, and then beat Sharapova again on hard courts to reach the final in Cincinnati.

And as she has through much of her career, she put together a strong end-of-season run—and may count herself unfortunate in not reaching the semis at the WTA Championships after winning two of her three round-robin matches.

Even so, Ivanovic ends the year with a best-ever nine top-10 wins, and despite winning more matches than any of her colleagues, she has continued to work in the ‘off season’ with gusto.

First she got the better of Williams again at an exhibition event in Denmark, then she became the backbone of the Micromax Indian Aces in this winter’s debut playing of the International Premier Tennis League.

Big names have dipped in and out of this rule-twisting tournament as it toured from Manila to Singapore to New Delhi and now Dubai, but Ivanovic has played every day in all four venues, a total of 12 sets across 12 days of tennis—winning eight of them—including one against Sharapova.

She has looked the heart and soul of the team, a cheering, upbeat presence through the men’s singles, doubles and mixed sets. For she has, it seems, a happy knack of getting on with everyone, and finding pleasure in everything. It was hard in Rome, even in the routine environs of the press conference, not to respond to her infectious cheerfulness.

Perhaps, then, this has been the key to finding something of her former freedom of expression on a tennis court, too. Ahead of the IPTL, Ivanovic talked to Redriff.com about this very thing.

“I think the biggest difference is that I’ve learned to be more laid-back. I am more relaxed these days, and try not to look too far ahead, or even make long-term plans as much as I used to.

“This has allowed me to play with less pressure and enjoy my matches more, and we’ve seen the results come too.”

She went on, too, to talk of her hopes for next year.

“Having more success at the Slams next year is definitely my main goal for 2015.
It’s very encouraging to consider that I finished fifth even though I didn’t have good results in the biggest events, the Slams. One of the most encouraging sides was that I was able to beat the very top players: Serena, Sharapova, [Simona] Halep, for example. The next step is to do it more consistently at Grand Slams.

“I really believe I can do it, and that’s what it will take to win another Grand Slam. I feel that my game is suited to all surfaces: This season I won titles on hard courts and grass, and came close in the Stuttgart final on clay. The French Open is always a very special tournament for me—I grew up on clay and I’ve won it before—but I believe that I have a chance in all four.”

No doubt victory in just one of them would make her millions of fans more than content.