Alison Riske, Belinda Bencic and Zarina Diyas are among the rising stars on the WTA Tour 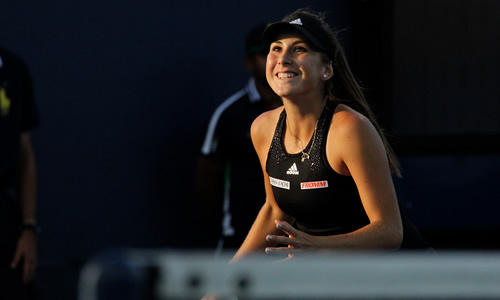 When the elite eight in women’s tennis take centre stage next week for the WTA Championships—held for the first time in Singapore—they will be joined by four of the most popular young women on the tour in 2014, as chosen by public vote.

With almost 700,000 votes cast, those selected to play the inaugural WTA Rising Stars Invitational are Zarina Diyas and Zheng Saisai for the Asia-Pacific group, and Monica Puig and Shelby Rogers for the Rest of World group.

No surprise, then, that these names have been lighting up two of the last tournaments of the year, the Japan Women’s Open in Osaka and the inaugural edition of the Tianjin Open in China.

But it also marked an important step for Diyas who has, in fact, put together a better win-loss record this year than her Grand Slam-winning opponent: 42-22. Before this week, though, she had never been to a WTA semi-final, let alone a final. She capped her best week by sealing her place in Singapore.

The 17-year-old Bencic was trying to become the youngest player to win a WTA title since a 15-year-old Tamira Paszek won in Portoroz in 2006. She burst onto the scene this year by coming through qualifying to reach the semis at Charleston but reinforced her presence by beating two top-10 players to reach the quarters at the US Open.

The final of the third tournament of the week, in Linz Austria, brought together two more rising names, both 22 years old: Karolina Pliskova beat Camila Giorgi, 6-7(4), 6-3, 7-6(4), to claim her second title in a blistering post-US Open run. Linz was her fifth final of the year and her third this autumn: After reaching the final in Hong Kong, Pliskova claimed the Seoul title just a month ago.

Giorgi was ranked 99 when she played the Australian Open, came through qualifying to the fourth round at Indian Wells, reached the final in Katowice, the semis in New Haven, and now stands at No39.

• The 21-year-old Puig became the first player representing Puerto Rico to win a WTA tournament at the Internationaux de Strasbourg this year. She also reached the quarter-finals in Guangzhou and Monterrey.

• American Rogers, 22 this week, reached her first final at Bad Gastein via qualifying. She reached the semis at Quebec City and the third round of the Rogers Cup, defeating hometown favourite Eugenie Bouchard in the second round.

• China’s Zheng made her Grand Slam main draw singles debut at the US Open, having been a doubles semi-finalist at the 2013 Australian Open. She reached the quarters in her last two tournaments—Hong Kong and Suzhou—and the semis at the Jiangxi Open.

• Diyas, currently ranked at a career-high No34, has risen more than 125 places this year. The Kazakhstan native reached the fourth round at Wimbledon and the third round at the Australian and US Opens. Diyas also reached the final at three ITF Circuit events, winning Quanzhou.

Serena Williams marks 210 weeks at No1, but Sharapova in chase to top