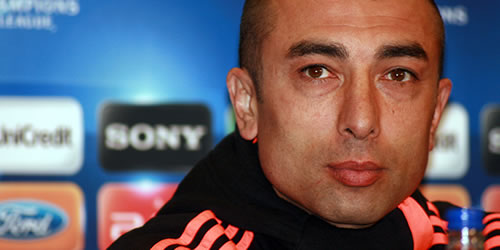 Roberto Di Matteo's side take on Barcelona on Wednesday Photo: The Sport Review

Roberto Di Matteo stressed his firm belief that Fernando Torres should be included in Spain’s Euro 2012 squad following his recent return to form.

The £50m striker endured a torrid spell since swapping Liverpool for Stamford Bridge in January 2011 and went 25 games without scoring this season before finally finding the net against Leicester in the FA Cup.

The 28-year-old, who has netted seven goals for the Blues this term, has not featured for his country since the 1-0 friendly defeat by England at Wembley last November.

But Chelsea interim boss Di Matteo is convinced the former Atletico Madrid striker is rediscovering his top form just in time to shine at this summer’s European championship.

“I think he’s been doing very well, especially in this last period,” said Di Matteo. “He’s been scoring goals and assisting goals. I’ve been very pleased with him and I have no doubt that he should be in the team for the Euros.”

Di Matteo’s side take on Barcelona in the the first leg of their Champions League semi-final at Stamford Bridge on Wednesday night – and the Italian coach admits his side will need two “perfect” performances to knock out the holders.

“It has to be collective team effort and responsibility to stop [Lionel Messi]. If you’re stopping one guy, they’ve got nine others that can hurt you so I think the tactical approach has to be to not just stop one player but to limit their threat in general.”