Tommy Robredo combines many of the qualities of his Spanish compatriots in a single package, writes Marianne Bevis 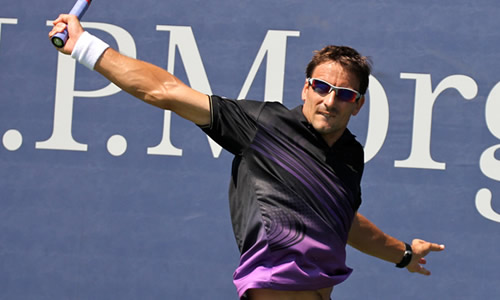 As the first Masters of the year on the burnished gold of Europe’s clay gets underway in Monte Carlo, all eyes are on the man who has made the terracotta environment his own: Rafael Nadal.

For Nadal’s name has become synonymous with the terraced courts of the Monte Carlo Country Club. His only defeat came as a 16-year-old on his 2003 debut, so he brings a 44-1 record to this week’s campaign for a ninth consecutive title in Monaco.

This year, though, for the only time since winning his first Monte Carlo title in 2005, Nadal is not the highest ranked Spaniard in tennis. After seven months away with injury, it is another, the 31-year-old David Ferrer, who sits one place above him at No4.

And although the bustling Ferrer is himself absent with injury this week, it was he—in the absence of Nadal—who took the plaudits in a show-stopper of a final against Andy Murray at the last Masters, Miami. Despite losing, Ferrer proved that his powers on a tennis court are, more than five years after he first reached a career-high No4, far from fading. With the season’s most match-wins and two titles in the bag, he will also remain ahead of Nadal for more weeks to come.

Even so, Spain continues to boast two of the top five men in tennis—and, in Nadal, arguably the best ever to slip and slide his way across clay. But that country’s golden vein of talent runs deep—and with a richness of style to make most rivals weep.

For Spain is a treasure-chest when it comes to tennis. The top 100 contains 13 Spaniards, and nine of them are playing in this week’s 56-strong draw. This is, after all, a surface that fits not just Nadal but most of his compatriots like a glove, though the Spanish melting pot should not be too readily pigeon-holed.

World No12, Nicolas Almagro, owns one of three single-handed backhands among the 13, is the all-time third among active players in clay-court wins, yet is also the season leader in aces.

Even ahead of the clay season, Almagro had fired 242 aces, and he reached his first quarter-final at the Australian Open. By the end of this week’s strong run in Houston, where he lost to the No2 on the aces list, John Isner, in the final, Almagro was up to 265. It’s hardly the expected profile for a man who has won all his 12 titles on clay.

Others, too, resist the ‘one size fits all’ Spanish model. Ranked in the 30s are two of four left-handers, former No7 Fernando Verdasco and the atypical package of Feliciano Lopez—a serve-and-volley exponent who also wields a single-handed backhand.

Lopez, like many others on the Spanish list, has improved with age, too. He reached a career-high No15 last year, at 31, and Marcel Granollers, aged 27, reached a high of 19 last summer. And while Almagro was plying his big-serving trade in Houston, another Spaniard was mining some old gold that had been missing from his tennis for some time.

Tommy Robredo combines many of the qualities of his compatriots in a single package. Just a fortnight short of his 31st birthday, his former triumphs have come largely on clay. Of 10 titles and seven more finals, only three were on hard courts, yet he plays the elegant single-handed backhand of the big-hitting Almagro and Lopez. But despite being a former world No5, Robredo has not made the cut for Monte Carlo.

Hit by back and leg problems through 2010 and 2011, he succumbed to leg surgery that took him off the tour for half of last year, and he plummeted to 471 in the rankings. On his return, he began carefully on the Challenger tour and won the first two he played. With wins at his few ATP tournaments hard to come by—though he beat the current No19 Andreas Seppi at the US Open—he reached the final of two more Challengers in the autumn.

Into 2013, though, and it has been the main tour all the way. Robredo opted for the clay as soon as possible—in South America’s “Golden Swing”—and the wins started to come. He reached the semis in Buenos Aires, falling to Ferrer, then lost to another of the Spanish armada, Almagro, in Acapulco.

Now ranked 72, he opted to open his French Open clay court swing on the other side of the Mediterranean, on the exuberant centre court of Casablanca.

It was his first return to the Morocco event since he reached his first ATP final there a dozen years ago. 2001 would prove to be his break-through year, too, as he rose from outside 100 to No30 by its end, though he would take four more years to break the top 10. Even so, he reached those heights a full year before the man who was born just a month before him, compatriot Ferrer. Many of these Spaniards really are late bloomers.

Robredo’s Casablanca, 2013 style, proved to be the perfect hors d’oeuvre to Nadal’s and Almagro’s main course in Monte Carlo, though his was a far from easy draw. First he made it past the No4 seed Benoit Paire in the quarters, outlasting a Frenchman who is seven inches taller and seven years younger, to take a 6-0 final set.

Then he did the same to the top seed, Stan Wawrinka, coming back from a set down to win the third, 6-2.

Finally he faced the in-form No2 seed, Kevin Anderson—a 6ft 8in man with a big serve and aggressive front-court game who had played just three matches to Robredo’s four. Anderson had flourished on the hard courts—a final in Sydney, quarters in Delray Beach and Indian Wells—but was proving to be no slouch on clay either, and he took the lead in the first set.

Nevertheless, the court craft and concentration of Robredo pulled back the early Anderson break, and the Spaniard went on to win the tie-break. Now, though, Anderson upped his offensive game, pinned Robredo behind the baseline with some bold serve and volleying, and took the second set.

A betting man would have taken the South African in the race to the title—fewer years in the legs and fewer hours on the Casablanca clock. But Robredo, defending superbly, found some acute backhand passes across the net-based Anderson, and tested his tall opponent with some crafty sliced play. He made an early break and held off break-back points as he served for the match at 5-3, 15-40. After two hours 20 minutes, Robredo finally claimed his first title in more than two years.

It brought the slender, elegant Spaniard to his knees—not with exhaustion but with relief.

“I’m very happy to win a title again after my injury. It’s just great! I knew that I could play a good tournament here… I went match by match, and kept winning. Today, I was pretty nervous since this is very important for me.”

It catapulted him up 29 ranking places to No43 and, with no points to defend until the summer, he can gain more in the coming weeks on his much-loved clay. He may even rise enough to earn a seeding at the French Open, where he has been unable to play since 2010 due to injury. It explained that word ‘important’: “The goal is to arrive in Roland Garros in the best form possible. After that, I will sit down and have a look at my goals.”

Whether he can emulate his compatriot and contemporary, Ferrer, in saving his best for last—Ferrer reached his first French Open semi-final after turning 30 last year—is too soon to say, though Robredo has already reached more quarter-finals in Paris than either Ferrer or Almagro.

But rather like that other veteran Tommy—the newly No14 Haas—it is simply a pleasure to again see him plying his elegant, intelligent trade to such great effect.