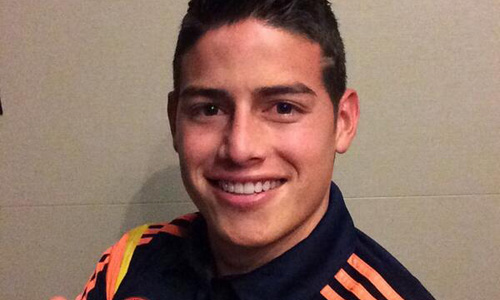 James Rodriguez scored a contender for goal of the tournament as the Monaco midfielder helped Colombia book their place in the last eight courtesy of a 2-0 victory over Uruguay.

The 22-year-old cushioned a pass on his chest with his back to goal before spinning and firing a long-range strike past Fernando Muslera in the 28th minute, with Rodríguez sealing Colombia’s passage with a tap in five minutes after half-time.

Here is the best of the Twitter reaction from the professionals, past and present, in chronological order to the World Cup’s rising star.

Former Northern Ireland international Keith Gillespie (@KeithGillespie7) names it as his pick of the World Cup: “Goal of the tournament!!!”

Ex-Manchester United defender Rio Ferdinand (@rioferdy5) claims to have tipped Rodriguez to shine before the World Cup: “James…..what a goal! chest/volley….I told u he was going to be a star of this World Cup #Columbia #RioInRio”

@swp29 not wrong. My kids were hyping him up B4 the tournament started as well.

Former Crystal Palace midfielder Mark Bright (@Mark__Bright) tells us why he feels it is the goal of the tournament: “I liked the way #Rodriguez had a quick look to see where the keeper was before reciving the pass, then Boom, it’s behind you #Muslera. #COL”

Ex-Liverpool striker Neil Mellor (@NeilMellor33) hasn’t been listening to Ferdinand or Joleon Lescott it would appear: “Tucking plenty of goals away this Colombia side in the World Cup. Weren’t mentioned much at start but maybe a few backing them now?”

England legend Gary Lineker (@GaryLineker): “James Rodriguez now has 5 goals, which was the winning total for the Golden boot 4 years ago. Won’t be enough at this World Cup.”

Former USA defender Alexi Lalas (@AlexiLalas) is keeping a close eye on the bench: “Yellow for Lugano. He’d had a very quiet game up until then. #COLvsURA”

Time for some Luis Suarez jokes; Shaka Hislop (@ShakaHislop): “Bite that #URU!…oh, I mean, stumble, fall, and let your face slam into that URU.”

Ex-Liverpool midfielder David Thompson (@77thomo) was in the dark on Rodriguez’s talent: “Didnt know Rodriguez was so good what a talent at 22 superstar..”