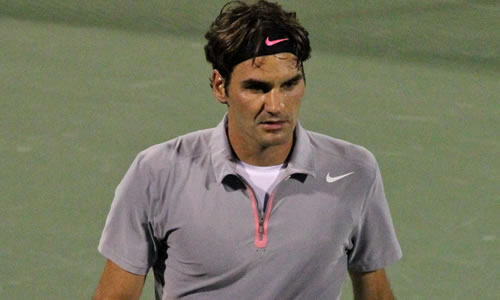 Roger Federer will take on Tomas Berdych in the semi-finals in Dubai Photo: Marianne Bevis

There is certainly a nice neatness to it.

With his victory over Nikolay Davydenko in the quarter-finals of the Dubai Duty Free Tennis Championships, Roger Federer reach his 888th career win and it prompted him to post a message on Facebook—not something he does too often: “Eight is my favourite number!

“One of my friends just emailed me and reminded that I just won my 888th match on tour. Very cool.”

With a penchant for eight, he might also have noticed that the win took him to a total of 1,088 matches.

Perhaps his fondness for the number derives from his birthdate, another suitably tidy set of numbers: 08-08-81.

Then more coincidences pile up around that birthday, too. The two men often bracketed with Federer in any debate about the ‘greatest of all time’, Pete Sampras and Rod Laver, have birthdays in the same four-day span—9 August for the former, 12 August for the latter: Leos all.

But while Federer may be a man of habit, of routine, even of minute control, he rarely comes across as a man of superstition, a man where luck has much to do with anything. Not for him the obsessive pre- and in-play rituals that revealed so much of Rafael Nadal in his biography, nor the stripping of his racket grip at every change of ends, a la Richard Gasquet, nor the wearing of the same shirt for every defence of his Wimbledon title as Bjorn Borg did.

Indeed as his coach, Paul Annacone—who was previously coach to Sampras too—asserted in 2011:

“I can tell you that Roger and Pete, the only superstition they have is that they’re not superstitious. We don’t sit down with Roger and talk about ‘This would be [Wimbledon] No7.” And I think that’s great because it helps [Roger] stay in the moment, and if you get too caught up in the what ifs, you can kind of drift away from the reality and what you are doing 30 seconds from now.”

And this is borne out by the many references in Dubai to retirement, to his trimmed schedule, to his preparations for now and the future. Things are carefully thought through over the long term:

“I don’t want to be dependent on what the other guys do…that’s why I am practising enough, being smart with my schedule, because I’m in a different situation than they are: It’s challenging, exciting, making the right decisions in my personal life right now.

“I just want to give myself the best possible chance to play as long as I can. And then eventually it will be clear that it’s time to stop, but the time’s definitely not now. We know things change very quickly—got to be ready and open for it, and I am. I’m not being naïve that I can play for another 15 years, but I’d like to give myself a chance to play for many more years to come…I’m hopeful that I’ll have enough match-play throughout the year, and if it’s not the case, the schedule changes very quickly.”

Perhaps it verged on impertinent, then, to ask whether he felt that, at his age—31—his concentration had diminished. But it prompted him to explain again how maintaining his form through 888 wins had nothing to do with luck but was rather a creative, evolving process designed to counter such issues—just as his revamped schedule is designed to keep him at his physical peak.

“So you sometimes get a bit—comfortable, I like to call it. I have really tried to fight it all the time, to make sure I have enough fire going, and that motivation is not the issue—you know it kinda creeps in on you sometimes. Because you’ve done it for so many years, but that’s why you need to keep practices exciting, your daily routines, even though you keep it the same way, you have to have fun doing it, otherwise it becomes a bit of a drain.

“And that’s where I always changed it up, where I’ve practised in the past, with whom I’ve practised, make it fun with my entourage. You know obviously with kids, it’s a totally new thing [but] those things are inspirational and motivational I think.”

It’s the same flexibility that also marks his schedule this year—even though the practical things such as approving his kit for next year’s Wimbledon and the US Open have already been put to bed.

His decision to miss out Miami has been described—by Reuters, for example—as taking a “two-month break from competitive tennis”. Another way to view his choice is that he has negligible point to defend there while he has included every event where he is defending champion—plus significantly the Masters he was forced to miss due to over-playing last year, Paris.

Then there was his comment: “Thought I might miss Miami once in my career to really prepare on clay.”

He has, it should be noted, yet to win the Rome title.

So yes, it was interesting that he commented on his favourite number, but not as interesting as the fact that, with 888 wins by his name, he is leaving nothing to luck as he prepares for the challenges of approaching a 32nd birthday, of children reaching school age, of some goals unfilled, of more Grand Slams he would like to win.

Footnote: The No8 is considered lucky in Chinese culture because it sounds like the word meaning ‘to generate wealth’. Property with the number 8 may be valued greatly by Chinese people. For example, the opening ceremony of the Beijing Olympics started at 8 seconds and 8 minutes past 8pm (local time) on 8 August 2008 (by pure chance, Federer’s birthday!)