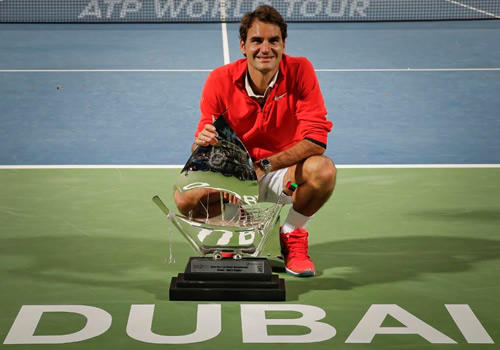 Roger Federer will be bidding for a seventh crown when the Dubai Duty Free Tennis Championships gets under way later this month.

The defending Dubai champion recently wrote yet another page in the history books when he won Brisbane last month to earn not only his 83rd title but his 1000th singles victory, something achieved only twice before in the Open era stretching back to 1968.

He has long been the player to beat and his record in Dubai is second to none, with his success at the Dubai Duty Free Tennis Stadium now a far cry from his debut in 2002 when he produced a lacklustre performance against Rainer Schuettler that led to a second round defeat.

The Swiss maestro rebounded in spectacular style the following year, sweeping through the draw without dropping a set and beating Jiri Novak in the final to begin a spectacular run of success that shows no sign of abating.

In all the years he has played the event since he has only twice failed to reach the final, in 2008 when he had the misfortune to meet 11th-ranked Andy Murray in the opening round and lost in three sets, and in 2013 when he was felled in a three-set semi-final by Tomas Berdych after holding three match points.

His 2003 triumph marked the beginning of a three year winning streak as he went on claim the title again in 2004 with victory over Feliciano Lopez and in 2005 by beating Andre Agassi in the semi-finals and then Ivan Ljubicic.

His run was brought to an end in 2006 when he was defeated by Rafael Nadal in a three-set final, but he re-captured his crown the following year when he beat Novak Djokovic in the quarter-finals and went on to overcome Mikhail Youzhny for his fourth Dubai title in five years.

Then came his sensational defeat by Murray, and he was unable to play the tournament in 2009 due to a back injury and he was absent again in 2010 due to illness.

By now Djokovic had become a serious rival and in Federer’s absence he had gone on a winning streak of his own in Dubai, winning the title in both the years that Federer was unable to play. In 2011 he made it three titles in a row when he beat Federer in the final, but when Murray upset Djokovic in the 2012 semis Federer pounced again and defeated the Scot to hoist the trophy for a fifth time.

Following his 2013 semi-final defeat which led to Djokovic once again taking the title, Federer regained his crown again in 2014 by beating Djokovic in the semis and then Berdych in the final.

Now the Super Swiss is ready to launch his bid for an amazing seventh title and, after a stunning 2014 season that saw him win five titles and reach a further six finals, he is full of confidence.

“I think I’m serving more consistent and stronger than I ever have,” said Federer. “I definitely think the (new) racquet has helped me with that as well a little bit. My concentration is there – better than it’s ever been – because I feel, over time, you always want to improve. I feel I’m playing very well.”

As he has slowly morphed into becoming a tour veteran, Federer has felt a need to adjust his training and fitness work.

“It’s changed just because you’re more careful not to get injured,” he said. “Quality is more important than quantity. Whereas when you’re younger you’ve got to put in the hours, you’ve got to put in the work. Doesn’t matter if you’re tired, you’ve just got to get through it, get match tough, go through the grind. But I am 33 now, so things are a bit different today than they were 10 years ago.”

Federer will face a formidable field as he bids to continue his remarkable run of Dubai successes, with major challenges coming not only Djokovic, Berdych and Murray but others such as Youzhny and Lopez who have also proved to be worthy opponents in the past.

“Roger Federer is a champion in every sense, both on and off the court, and we are thrilled that he will once again be taking part in the Dubai Duty Free Tennis Championships,” said Colm McLoughlin, executive vice chairman of Dubai Duty Free, the tournament owners and organizers. “Although he has enjoyed enormous success here history has shown that victory can never be taken for granted, and it will be fascinating to see if he can once again leave here as the champion.”

Tournament director Salah Tahlak added: “Roger Federer will go down in the history books as one of the greatest ever to have played the game, and with his presence so much in demand all around the world it has been an honour to see him play in Dubai so many times in his career. At the age of 33 his hunger for the game remains as strong as ever and no-one would be surprised if he can claim the title here yet again.”