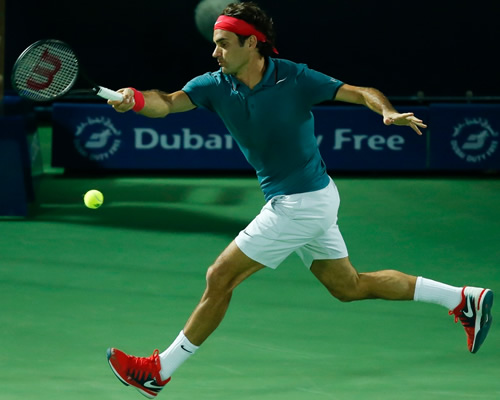 Ten of the last dozen titles at the prestigious Dubai Duty Free Championships have been won by just two men: Novak Djokovic and Roger Federer.

They are the top ranked players in the world and the top two seeds: In short, they are the men to beat on the courts that both find so much to their liking.

Indeed defending champion Federer—with an unparalleled six titles here—finds this skyscraping city that has one foot in the desert and the other in the Persian Gulf so much to his liking that it has become his second home and chief training base.

But Dubai has become the most star-packed of all the ATP 500 event, drawing back big names time and again and attracting new ones to try their luck against the two who have maintained such a stranglehold.

Chief among those who have made a big mark here through the years are third and fourth seeds, Andy Murray and Tomas Berdych, who bring the top-10 players on the start-list to four—and the remaining seeds are all ranked in the top 20. And while neither of these has managed to win the Dubai trophy, both have reached the final.

Can they, or any other of the 32 in this fascinating draw, deny the king-pins?

Bearing in mind that Djokovic has not played since winning the Australian Open, he faces a testing opener. Vasek Pospisil has the ability to press the best but may not have the staying power to outmanoeuvre Djokovic, as he showed against Murray in Rotterdam.

Djokovic, in any case, is a man currently at the top of his game, and is simply suffused with confidence. He also has no fewer than three qualifiers in his quarter, and his first seed, Feliciano Lopez, has only taken one set off the Serb in their five meetings—though that one set was in Dubai.

So it looks like the test will come down the Berdych in the semis, and that really could be a test. Berdych is the losing finalist in the last two years, to Djokovic and then to Federer. He was also a semi-finalist and quarter-finalist in the two years before that. The Czech is also in great form, reaching the final in both Doha and Rotterdam as well as the semi-finals of the Australian Open.

He has the worse of it in the top half, though, opening against Jeremy Chardy. Then comes Simone Bolelli, who has just recorded the biggest result of his career in Marseille with a first top-10 win over Milos Raonic.

Berdych’s quarter-final throws in the survivor of Sergiy Stakhovsky and Lukas Rosol, or Ernests Gulbis and Denis Istomin. Stakhovsky in particular has enjoyed a rich vein this month to reach the Rotterdam quarters and the Marseille semis.

But this looks like a Djokovic—Berdych semi. The question will be, is the Czech confidence big enough to down the mighty Serb? He will fancy his chances.

Murray has not played in Dubai since reaching the final in 2012, the year he beat Djokovic before falling to Federer. Murray, though, beat the Swiss here in 2008 and has a near-even record against him over their decade-old rivalry.

Murray’s form has returned this year, too, after an inconsistent season in 2014 following back surgery: He reached the Australian final though looked out of sorts in losing to Gilles Simon in the Rotterdam quarters. However he opens against the big-hitting Gilles Muller, which is not the best way for the Briton to adjust to the courts. The 31-year-old from Luxembourg is at a career-high after a strong start to his year, and beat two top-20 players in Rotterdam.

Murray’s first seed is Belgian David Goffin, though he retired in his quarter-final in Marseille this week and has had a mediocre start to the year after finishing 2014 with some style. An alternative quarter-finalist for Murray is Philipp Kohlschreiber, a regular in Dubai for over 10 years and a semi-finalist here last year.

Federer, who has not played a competitive match since his surprise third-round loss at the Australian Open, has a very tricky start against two-time former finalist Mikhail Youzhny. The Russian is playing in Dubai for the 14th consecutive time, and has beaten both Nadal and Berdych here, as well as stretching Djokovic to three sets—but he lost to Federer three years in a row… and has not enjoyed great form so far this year.

However Federer’s quarter is full of talent, including a couple of men who have beaten him, notably Richard Gasquet and Andreas Seppi, who play one another in a classy opener. Seppi it was who cut Federer short in Melbourne and he is enjoying some of his best results in years.

Federer’s second opponent would be between Fernando Verdasco and Guillermo Garcia-Lopez in another intriguing first-round contest. Even the fourth opening pair looks challenging, featuring as it does Roberto Bautista-Agut, semi-finalist this week in Marseille, against the rising star Dominic Thiem. Also in this half is wild card Marcos Baghdatis.

And what if Federer and Murray meet in the semis? The Briton will surely want to set things on a new course against the Swiss after losing all three matches last year, but Federer will want this—a statement win after a lack-lustre Melbourne.