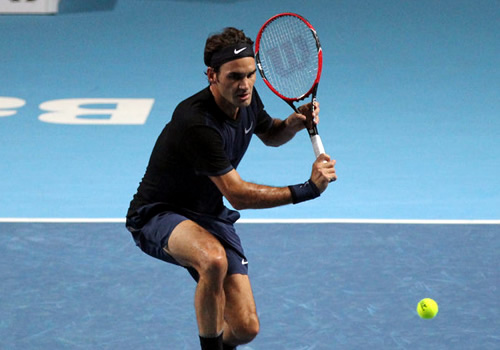 Theirs is an old friendship, but the relationship between Roger Federer and Philipp Kohlschreiber on a tennis court had played out as a one-sided affair right from the start, 10 years ago on the grass of Halle. The six-time Basel champion went on to win all their 10 meetings.

But asked about it before their 11th face-off, Federer was making no assumptions—quite the opposite: “It goes both ways: if you’ve beaten someone like that 10 times, you always feel like maybe next time it won’t happen anymore. That loss is going to come at some point.”

He quoted their meeting not four months ago, back on the grass of Halle where the German 32-year-old had pushed him to the limit, finally losing in a third-set tie-break.

A closer look at their record, though, and it was evident that Kohlschreiber had never won a set against Federer on a hard court, including their most recent encounter at this year’s US Open.

But never mind past records, nor that Federer had reached the final at his home tournament for the last nine years, a 57-9 run, nor that he was enjoying a great season of five titles, plus the finals of two more Masters and two Grand Slams. This was a new match, even if it was against an old adversary.

It seemed to start well enough for Federer, with a break point courtesy of an audacious chipped return and backhand winner. Kohlschreiber held, but Federer broke through in the fifth game and then held to love, 4-2. After 31 minutes, the home crowd started to relax in their seats: Their hero was a set to the good, 6-4.

If there was one fly in the ointment, it was Federer’s first serve level. When they hit the mark, he was winning almost every point: He dropped only three points on his first delivery in the first two sets together. The problem was, he was striking under 50 percent of them into play. And in the second set, Kohlschreiber was holding with ease. This time, it would be Federer who faced break point—and it came on set point. The German, so quick and nimble in taking a short ball, forced the error and took the set, 6-4.

Things changed in the deciding set with neither showing a chink in their serve. Federer unleashed his SABR move in the first game, but Kohlschreiber was not intimidated. So it remained all square—until Federer worked the only break point of the set—also at the key moment.

Buoyed up by a Mexican wave and a roaring stadium at the change of ends, Federer backed off Kohlschreiber’s serve to give the ball air and depth, then went in for the attack. One break point, one break, and Federer was serving for the set—and he did so, when it came down to it, with ease, 6-4.

He afterwards admitted that he had perhaps made life a little more difficult than it need be in the early stages:
“I was holding my serve OK except for one game. It maybe made my life a little bit more difficult in the first two sets, but it wasn’t terrible. Still holding, don’t think he had break point until set point on my serve.

“It was more the defence today wasn’t there like it was in the first match. Struggling to see his serve, getting that extra ball back to give myself a little bit more opportunity. But I wasn’t able to create that. I was still in the lead most of the time, but it was key to stay with him at the beginning of the third, and as the match went on, maybe he got a little bit tired, maybe a bit of a little injury.”

He then paid tribute to the crowd: “By having the crowd right there, I though it gave me extra energy. It was a great end for me, and I enjoyed the atmosphere out there.”

But what of his next opponent, the man who, by coincidence, he last played right here, in last year’s final. David Goffin, this time last year, had only just broken into the top 30 after a storming run of wins. This year, he was Basel’s No8 seed, and he had fulfilled that seeding to set up a rematch with Federer, though he wished “I could meet in the final again!”

Goffin had been nervous and tired by the time he played his idol in front of the Swiss crowd. This year, he believes he has matured, and is stronger. What was Federer’s view?

“Well we practised together in Dubai in December, so we put in 10-15 hours on the court, played tons of sets, trained hard, and of course have seen each other on the tour, many times.

“I think it’s going to be a tough match, I think he’s a great player—I said that from the first time I played him in Paris when he had his great run there. He’s got the footwork, the power, the tennis IQ, if you like, and it makes him tough to play. He can return very well, too, when he’s on a hot streak. And I know of course it’s going to be tough again tomorrow.”

Theirs will be the last quarter-final played in a sizzling schedule that includes Rafael Nadal against Marin Cilic, Donald Young against Jack Sock and, to open proceedings, Richard Gasquet taking on the ace-demon, Ivo Karlovic.

Gasquet preceded Federer on Centre Court in another battle of the single-handed backhands in what would be a superb display of attacking tennis—easy on the eye and exhilarating for the spirit.

The Frenchman needed to win—indeed needs to win this title and the Paris Masters next week—if he is to claim the No8 spot in the Race to London. As it is, his victory over the huge talent of Dominic Thiem has put him in the first reserve place. And based on his performance this evening, the rejuvenated Gasquet full deserves it.

Thiem also showed why he is perhaps the prime candidate to take the ATP’s Most Improved Player of the Year Award next month. The 22-year-old is the youngest in the top 20, having won his first three titles this year. And he it was who got the first break, but Gasquet, who reached the semis of Wimbledon and the quarters of the US Open this year, turned on the style with a vengeance, leaving the athletic Austrian shaking his head in disbelief more than once.

Gasquet broke back in the fourth game, and showed more enthusiasm for attacking the net than in many a year. It paid off in spades and he dominated the tie-break, 7-6(1), but not before perhaps the point of the tournament which drew a standing ovation from the crowd. It immediately became the ATP’s Hot Shot of the Day, and a contender for rally of the year.

The 29-year-old Gasquet rode that momentum with an early break in the second, and though Thiem had break points in the sixth game, the Frenchman was irresistible, and served out the win, 6-4.

At the start of the week, it seemed fanciful to think Gasquet had a chance of winning here, let along Paris: After today’s performance, perhaps it is not so fanciful after all.