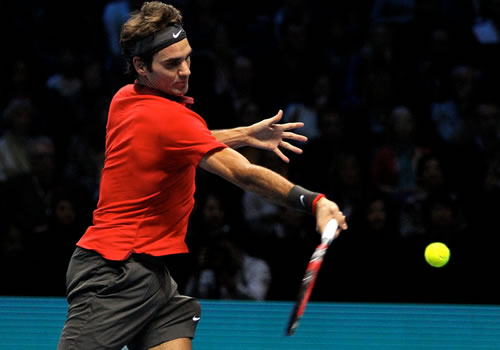 The permutations as Roger Federer and Andy Murray headed into the vital final round-robin match of their group were complicated beyond words.

The bottom line was that six-time champion Federer could top Group B with almost every result—except one. And things suddenly became still more complicated.

A day that began with 10 scenarios became, at 12.30pm, a day with seven after Milos Raonic withdrew from his final match with injury.

And the one loop-hole that could prevent the mighty Swiss from reaching his 12th semi-final appearance in 13 consecutive appearances at the tour-ending Championships involved Kei Nishikori and Raonic’s last-minute replacement, David Ferrer.

Five times in eight meetings, the Japanese man had beaten the 32-year-old Ferrer, and in all three of their meetings this year. Should Nishikori win this one in straight sets, and Murray beat Federer, it opened the door for a three-way count-back of sets and games… perhaps the most precarious and unsatisfactory way to determine a semi-final place in such a tournament.

Should Federer become entangled in that loophole, it would for many open the door to an exit of a particularly unfortunate kind. For the Swiss had put together a remarkable year to put him within touching distance of world No1 from a ranking low of No8 just eight months before.

In 2013, Federer was hit by back injury, unexpected losses, slips in the rankings and much debate about his advancing years—he turned 32 just weeks after losing Wimbledon in the second round and going out of Hamburg to a man ranked outside the top 100.

Back indoors at the end of the year, he rallied to reach the final in Basel and the semis in Paris and London. By the time he embarked on 2014 he had taken the bold step of changing his racket and joining forces with childhood hero Stefan Edberg. But despite a semi run at the Australian Open and winning the Dubai title—beating Murray and Novak Djokovic along the way—he found himself at his lowest ranking in 11 and a half years when he arrived at Indian Wells.

But the Federer plan—one with enough vision to use his new racket and coach to inject more attack into his tennis, one with a level of fitness born of months of training, and one with the kind of unwavering determination that has driven Federer for the last 15 years—was already bringing rewards.

For this most fluid and apparently effortless of players, regardless of his calm demeanour and easy way with colleagues, fans and media, has not topped the rankings longer than anyone else, won more Grand Slams than anyone else, without a fierce self-belief and competitive drive.

By the time he had qualified for the his 13th World Tour Finals, he had become the father of a second set of twins, turned 33, won five titles from 10 finals, and gone 36-3 between his two visits to Paris at Roland Garros and Paris-Bercy.

He had scored more wins, 70, than anyone on the tour: indeed no-one else has yet reached 60. Ahead of his Murray meeting in London, he had notched up a 15-5 record over top-10 opposition. And while hopes of reaching No1 by the end of the year had been dashed by new father Djokovic’s return to the tour in his very best form, Federer was sure to become the oldest year-end No2 in history.

Not that the rankings were foremost in his mind at the start of the year, but rather to get back to winning ways.

“Honestly, I didn’t put any target on the rankings. I was more rather putting a target on trying to win an amount of titles, because last year I had only won one. That was quite disappointing actually, so I was trying to get maybe three to five at least. That was the goal. I have five now: I think I made another five finals, then also now we’re in the Davis Cup final, so it’s been a very successful year. Better than I thought it was going to be.

“The rankings came by surprise that all of a sudden, I have a small shot at world No1 after winning Shanghai. I mean, I’m happy it’s this way, but I think it’s highly unlikely it’s going to happen.”

Then the competitive Federer mindset showed itself: He still believes that No1 is a realistic goal.

“For me personally, it doesn’t really matter if it happened at the end of the year or any other week during the year, as long as you could get back to world No1 for one more time. I think that would be very special because I’ve been there and I know how much it would mean, because winning a tournament is a one week thing or a two week thing, but getting back to world No1 is an entirely different animal.

“I’ll try to get there, but obviously Novak is going to dictate as well what’s going to happen here.”

Meanwhile, the competition of the tournament is more than enough to keep him focused and hungry—though after beating Nishikori and Raonic in straight sets, he could not have predicted just how unpredictable the last round-robin day would be: “We’ll see if I’ll be qualified or not. I’d like to be qualified, to be quite honest. At least I would know I am through than having to win a set or maybe having to win the entire match. I don’t even know what it takes. Usually if you do win in straight sets twice, things look very, very good. The advantage of being qualified is just that you can go into the match a bit more laid back, but then [there’s] the integrity of the game, and there’s so much still at stake for me, wanting to beat a fellow rival and wanting to win the points that are at stake, go in with a clean sheet into the semis…

“If it’s all to play for, a bit more nerves maybe. But at the end of the day, it’s how we play every match on tour.”

As it happens, by the time he took to court against Murray, he would know what he had to do to qualify—though there would be the added incentive of wanting to qualify as top of his group to avoid, most likely, facing defending champion Djokovic in the semis.

But with two straight-sets wins here already, it would be a cruel end to a bold and successful 2014 should his exit come so soon and in such circumstances.