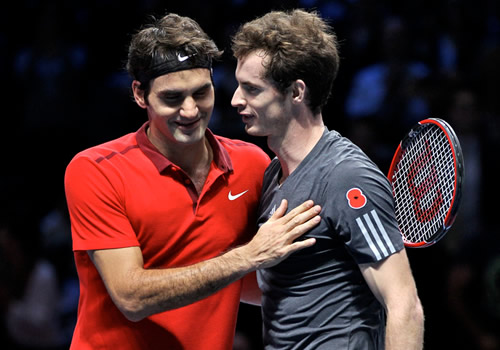 Roger Federer is expecting Andy Murray to enjoy a successful 2015 season after the Swiss No1 thrashed the Scot at the ATP World Tour Finals.

The 33-year-old was in unstoppable form as he brushed Murray aside 6-0 6-1 in less than an hour at the O2 Arena in London on Thursday night.

Murray has struggled to find consistent form this season after undergoing back surgery at the end of last year.

But Federer is fully expecting the 27-year-old to come back stronger in 2015.

“I think he’s definitely had to work very hard to come back to a level that he’s happy with,” said Federer after the match.

“I can compare just slightly to me, because I guess we’ve had some similar issues in the last couple of years. You just tend to be up and down, especially against the top players.

“There’s just that little bit of doubt maybe that you need to play unbelievably well and the other guy you hope he doesn’t play his best. Only then maybe you can get it done.

“Maybe he has those kind of confidence issues. I went through exactly the same last year. It’s like an up and down battle. Every point is complicated. Every day is complicated. At the same time you do have your good days, you have your OK days. But they’re not so often.