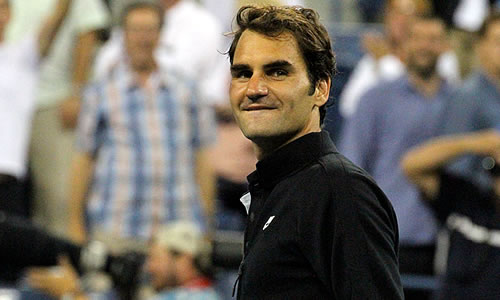 Roger Federer is through to the Shanghai Masters final Photo: Marianne Bevis

It was proclaimed the blockbuster of the week at the Shanghai Masters, this much-hoped-for contest between Novak Djokovic and Roger Federer.

Djokovic stood at No1 in the world rankings and the Race to London. By the end of the week, Federer would stand at No2.

Only fitting, then, that the two top men owned some of the best stats of the season: Federer led the Tour in match wins (59), top 10 wins (12), and Masters wins (24); Djokovic was second in match wins (52), unbeaten in Shanghai for 14 matches and two straight titles, and undefeated in 28 matches in China. The last time the Serb did lose in China was here in 2010—to Federer.

Their most recent match was a stunning five-setter at Wimbledon, won by Djokovic to take him back to No1. Their only previous meeting at the All England Club was in 2012, a win for Federer, who would also go on to reclaim No1.

Now they were meeting for the 36th time, in a rivalry second only to Djokovic and Rafael Nadal’s 42 meetings. And in one final twist, 20 years ago their illustrious coaches, Boris Becker in the Serb’s corner and Stefan Edberg in the Swiss, had enjoyed a similarly intense rivalry, also of 35 matches.

Yet the popularity of this rivalry has not just been about frequency. Of all the match-ups between the famous “big four”, this has become many fans’ favourite, pitching Federer’s all court fluency, attack and tactical guile against the super-fit, super-flexible body and intellect of one of the greatest defenders in the game.

Both are capable of probing, accurate serving and both boast flat baseline power, challenging sliced backhands, and an ability to turn defence into attack at the drop of a hat. Their rivalry is akin to physical chess—and it can be magical.

If there was any doubting Federer’s intent—both in taking on one of the finest serve-and-volley players of the Open era as coach, but also in the game plan that has increasingly permeated his tennis—it was soon clear. He would attack the net at every opportunity, and not just on his own serve.

But Djokovic, too, had clearly determined on attacking tactics, no doubt in part in reaction to the inroads made by an offensive Mikhail Kukushkin in their third-round, three-set thriller.

The opening game produced four winners from six points, and a hold for Djokovic. Gradually, though, Federer’s high-risk tactics paid off, and he drew errors from a rushed Djokovic in the fifth game to earn an early break.

These net-racing points were almost Federer’s undoing in the next game, as a couple of brilliant Djokovic cross-court backhands passed the Swiss to bring up a break-back chance, but the Serb could not convert what would turn out to be his only break-point in the match.

Instead, Federer pressed home his advantage with a remarkable 47-second game of four aces to take a 5-3 lead, to the delight of the already partisan crowd. The Swiss served another ace to hold for the set, 6-4.

On paper, there was not a lot between them—separated by a couple of winners and a couple of errors in Federer’s favour. But the effectiveness of Djokovic’s baseline shot-making shone through in Federer’s success rate at the net: just nine points from 19.

Not that such stats helped him stem the Federer assault in the second set. The Swiss has learned to his cost just how dangerous Djokovic can be when given the smallest of openings: In three of his last four wins over Federer, the Serb overturned a first-set loss to take the match, and few could forget the two successive US Open semi-finals when Djokovic turned a deficit into victory.

So the Swiss concentration remained fully engaged, and he went toe-to-toe with Djokovic through a long backhand rally to hold for 2-0.

Yet there were signs, time and again, that Djokovic was not out of this engrossing tussle. Federer looked sure to break again in the fifth game, but Djokovic produced clutch serving and cross-court passing shots—even taking on a serve-and-volley himself—to stave off the Swiss. Four break points came and went, and then a couple of deuces in the seventh game too.

Djokovic also began to make inroads on the Federer serve—four deuces at 3-4, and outplaying the Swiss in five-stroke volley exchange. But after seven probing minutes, Federer went 5-3. After another six minutes, Djokovic survived two more break points to force his opponent to serve it out.

Here, then, was the test of the Federer confidence that had dipped with back-injury last year. He went 15-30 down against a Djokovic wide-eyed with focus, but took control with a forehand winner, an ace and, appropriately enough, a volley winner to seize set and match, 6-4.

Yes, the fitness and confidence are undoubtedly back, and he could not stop beaming when asked whether he was playing his best tennis of the year: “Yes, I think maybe I am.”

A tally of 35 winners to 23 errors would not disagree, and nor did Djokovic: “I think I did not play too bad. It’s just that he played everything he wanted to play. He played the perfect match. I think he’s going to tell you how he felt, but that’s how I felt he played. He played an amazing match.”

In his fifth Masters final of the year, Federer will face Gilles Simon, who has been playing the kind of smart, nimble, error-free tennis that took him to No6 in the world a few years back and unpicked the big serve-and-volley game of Feliciano Lopez, 6-2, 7-6.

And Simon’s coach, notebook in hand, was watching Federer with great interest: Tactically, the Frenchman is as smart as they come. He won his first two matches against Federer and took the Swiss to five sets in both previous Grand Slam meetings.

It promises to be an intriguing match of contrasts, of mental resolve, of smartness and quick thinking.