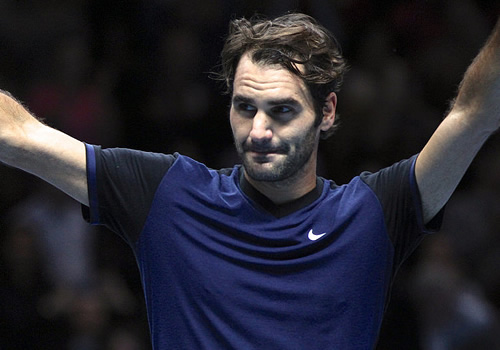 Roger Federer has invariably been the name that springs from the fans’ lips when it comes to tennis in Switzerland.

For more than 12 years, since he won the first of a record number of Grand Slam titles and then began a record-setting 237 weeks at No1, Federer has been the man.

But the late-blooming, big-game Stan Wawrinka has steadily and most assuredly made his way into the Swiss reckoning. Just four years younger than his 34-year-old compatriot, he joined the top eight for the first time at the World Tour Finals in 2013, won his first Grand Slam at the start of 2014 to briefly overtake Federer with a career-high No3 ranking, and this year put together the best Grand Slam year season of his career: the quarters of Wimbledon, semis in Australia and New York, and winning Roland Garros in blistering style over Novak Djokovic.

Along the way, he became one of a rare club in winning a Masters title, beating Federer for only the second time in their 10-year career of 20 matches. He stormed past Federer again in straight sets at Roland Garros this year, though Federer won their only subsequent 2015 match, in relatively short order, at the US Open.

In short, the Swiss nation now had another man, the altogether more alliterative ‘Stan the Man’.

Wawrinka has also thrived on the indoor court of the O2 since that first 2013 visit, now into his third straight semi-final. What has it been about this event in this venue that has brought out some of his best?

“It’s a little bit of everything. First, it’s an amazing tournament to play. Then the conditions normally are quite good for me. But you also play only the top guys, the top eight players. If you look at the last two years, almost two and a half, I start to beat a lot of the top guys. I start to be really confident against them, have the game to beat them.”

But Federer has shone at the season finale more than most. This would be his 13th semi-final from 14 consecutive qualifications, and he reached it without losing a match. He has won six times from nine finals and stacked up more match-wins here than anyone else.

And his form through the year was also impressive. No Grand Slam title like Wawrinka, but six titles—including a Masters—along with two Major finals and two Masters finals. He also arrived with an indoor title, his seventh in Basel.

The place, as it has been every year since taking up residence at the O2 in 2009, was strewn with Swiss banners, flags, and messages to Fans’ Favourite Federer, but the numerous enclaves of supporters had also thrown their weight behind the popular Wawrinka. What would these thousands of fans do in the face of two Swiss stars?

Despite the roar for Wawrinka’s entrance, the crowd almost blew the roof off for Federer. This was as lively, loud and enthusiastic a crowd as the O2 had seen all week. And they were richly rewarded in the early stages.

Federer, as has become his Edberg-esque trademark, went straight to work with a serve-and-volley play to set up a love hold.

Not to be outdone, Wawrinka, opened his love hold with an ace. Federer continued his run to seven points on serve, but this time Wawrinka closed to deuce. Although Federer held, his first serve suddenly let him down in the fifth game and Wawrinka took full advantage. Federer even tried a serve and volley on a second delivery, but it brought up break point, and he was outmanoeuvred at the net again for the break. All at once, in the blink of an eye, Wawrinka led, 4-2.

Then it was the younger Swiss man’s turn to lose his first serve, and a double fault brought break point. Federer needed only one invitation: They were all square again, and Federer’s serve was back in a groove with one point dropped in his next two service games. He went for the kill and broke with ease for the set, 7-5.

Federer had made 11 points at the net already, and he ploughed the same furrow to the net time and again. The crowd was now divided: they wanted more, but Federer was not feeling too generous, and with a quick break, led 3-0, though not before defending a break point, Wawrinka’s only chance in the set.

Even the minor threat of 30-30 produced two Federer aces to hold for 4-1, and that was followed by a love hold. Wawrinka was now racing through points, perhaps trying to disrupt the Federer rhythm, but the elder Swiss has always been content to play fast. 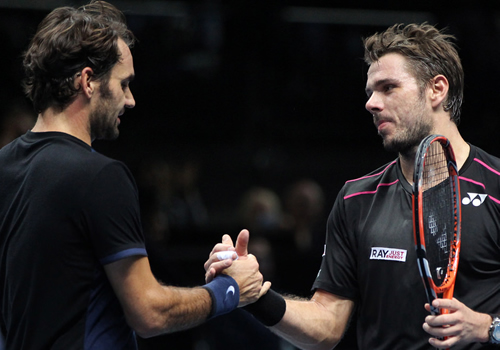 In a last flurry of resistance, Wawrinka hit down three aces in a row and saved a match point, but it was too little too late. Federer served out to love, 6-3, in even shorter order than Djokovic had done during the afternoon. It had been a tidy 70 minutes of 30 winners, only 19 errors and 24 points from 32 net attacks.

So Federer is into his 10th final, and as luck—and tennis prowess—would have it, London will have the chance to see the match it missed last year. He withdrew just before his final against Djokovic with a back injury to hand the Serb his fourth title here and the third in a row.

The pair have already faced each other this week, with Federer triumphing 7-5 6-2 on Tuesday.

“It matters because we can both look back on it and see what we could have done differently, for good or bad,” said Federer on Saturday night. “That’s interesting for both of us… For me it’s an advantage because I guess it gives me a bit of confidence.

“For him it’s an advantage because he gets a second chance, and he’s in another final. He’s played some great tennis since we’ve played… I still believe his confidence is slightly higher than mine with the amount of success he’s had this year.”

The Serb is undoubtedly the player of the year, head and shoulders above the field in ranking points and titles, but Federer is the one player to have scored three wins over him in 2015—including his week. With both hitting fine stride in their semis, can Djokovic draw level in their compelling 22-21 head-to-head? London will soon find out.