Roger Federer could defend the title he won last year, could match Rafael Nadal and also claim the Wimbledon record 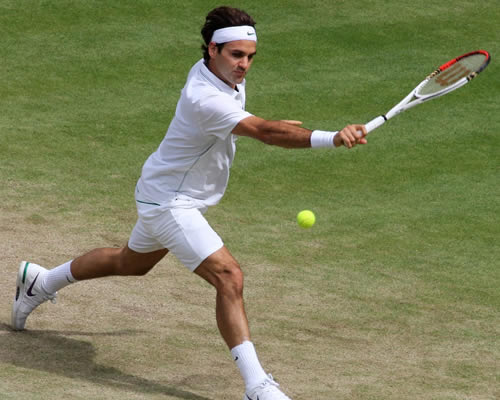 As the world of tennis glides seamlessly from orange to green, from grit to grass, from its clay Grand Slam to its turf Grand Slam, so has talk of one record by the king of Paris transitioned to another that could match it from the king of Wimbledon.

Amongst the many firsts that Rafael Nadal achieved last week at the French Open, he became the only man ever to win the same Grand Slam title eight times. Indeed no-one before had ever won Roland Garros seven times, let alone eight.

Roger Federer, however, has not yet been able to claim the same record at the tournament he has dominated since he won his first Wimbledon 10 years ago, in 2003.

For he shares his chart-topping tally of seven titles with two other men: William Renshaw (though back in that Victorian era, the Briton defended his titles in a ‘challenge round’ rather than playing through the draw) and Pete Sampras.

So if next month, Federer, in his 55th consecutive Grand Slam appearance and his 15th consecutive Wimbledon, defends the title he won last year, he could match Nadal and also claim the Wimbledon record.

This year, however, he approaches Wimbledon with another more unusual ‘first’ alongside his name. Not since he reached the quarter-finals in his third main-draw appearance at Wimbledon in 2001 has he entered the grass swing without a season title to his name. That, he hopes, will soon be remedied in another place dear to his heart.

The year after Federer won the junior Wimbledon title, he preceded his first senior appearance at SW19 in 1999 at the Queen’s Club. Ever since then, however, he has favoured its German rival in Halle, and this week he celebrates the 10th anniversary of his first title there.

Halle proved to be a significant win, back in 2003, for he went on just weeks later to win his first Wimbledon title. So it’s little wonder that he has such affection for the tournament in the German countryside:

“I really enjoy coming here. It’s one of my favourite ones on tour… almost like home. I’ve been here so many times, and I’ve been successful here on top of it, which helps to like it even more.”

His record in Halle certainly does the talking. He has never fallen short of the quarter-finals, reached the finals seven times—winning five—and stacked up 39 wins to five losses.

It is this track record, backed up so many times at Wimbledon, that puts him at the very top when it comes to grass-court prowess. Among active players, he leads with 117 match wins and 12 titles—only Lleyton Hewitt comes anywhere close with 112 and seven respectively.

So Federer, naturally, is keen to see more grass-court tennis feature in the calendar, and that may become a reality from 2015 when Wimbledon is moved back by a week to the end of June.

“I think it’s a great thing for the grass court season that we have an extra week so players who really enjoy playing on the grass can play one more. For the ones who want to rest a little bit more between the French and Wimbledon, they’ll have that extra week as well. So, I think it works well for almost everybody. But let’s not forget that we used to have three of the four Grand Slams played on grass, now we have only one…I think it’s nice to bring back a bit more grass to the tour.”

And where better than Halle to bounce back from his quarter-final exit at the French Open this year: “It was disappointing how I played [against Tsonga], especially as so much was at stake.”

But having the opportunity to arrive early in Germany has had its benefits: “I immediately started practising, Friday, Saturday, Sunday. Therefore, I’ve really spent a lot of time on grass—more than in the past years.”

He even accepted the offer of a wild card to play doubles with his friend, Tommy Haas, the man who beat him in last year’s final. They lost their first match, but Federer made seamless progress once again to the singles quarter-finals.

He defeated the young German talent, Cedrik-Marcel Stebe, 6-3, 6-3, in just over an hour, to take his Halle tally to 40 wins. However, he made clear ahead of the tournament that winning his first 2013 title this week was his chief aim:

“I’m always highly motivated for Wimbledon and have been really successful there…But I’m aware that I’ll have to feel really good because on grass you can easily lose when you’re not feeling a 100 percent or doubt yourself. Therefore, it’s important to have a lot of confidence. I do have self-confidence but victories here in Halle would help for sure…this tournament is very important with respect to Wimbledon. But I would like to win my first title of the season here in Halle.”

Putting an end to his title drought this week would certainly give him the right springboard for the second half of the season, a phase during which he has big points to defend. Not only was he champion at Wimbledon but also in Cincinnati, and he defends final finishes in Basel and at the World Tour Finals—and reaching the tour’s climax in London for a 12th straight year will also figure large in his ambitions.

For now, he must prepare for German wild card Mischa Zverev on Friday, followed by one of three very tough customers in the semis: Gael Monfils, Ernests Gulbis and, as luck would have, his friend Haas once again.

“Wimbledon”, he stressed, “is afterwards.”