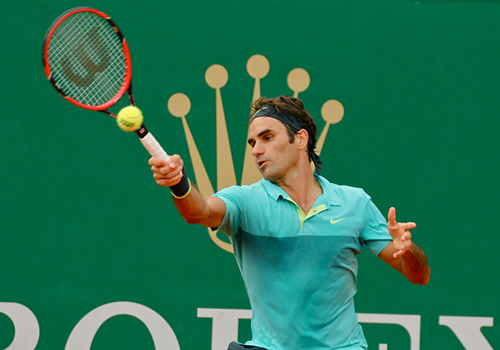 Roger Federer is hoping to return for the Monte-Carlo Masters Photo: Marianne Bevis

World No3 Roger Federer has announced on his Facebook page that he intends to delay his return from knee surgery until the first Masters of the European clay season, the Monte-Carlo Rolex Masters in April.

Federer’s last event was the Australian Open, where he lost to eventual champion Novak Djokovic in the semi-finals. He suffered a torn meniscus a day later and returned to Switzerland to undergo arthroscopic surgery, pulling out of the indoor ATP500 in Rotterdam and this week’s ATP500 in Dubai, where he was defending champion.

He Tweeted earlier this week of his excitement to be back on the practice courts, and followed it with a message of thanks to fans on his website. But the latest Facebook message expands on his progress and upcoming schedule.

“The rehab for my knee is going really well! I have now had a lot of great practices on the court and in the gym.

“As it is a long year, I don’t want to push it too hard and come back too soon. Thus, I will unfortunately not be able to make it back in time for the great event in Indian Wells but I do plan on playing in the desert next year.

“After consultation with my team, I have decided to enter the Monte-Carlo Rolex Masters.

“Thanks for the support and I will see you back on tour soon.”

Indian Wells, one of the biggest tournaments in the tennis calendar, has been a happy hunting ground for Federer for 15 years. This will be the first time he has missed the event since his debut appearance in 2001, and he is a four-time champion, most recently in 2012. He has reached the semi-finals an additional five times, going on to be runner-up to Djokovic for the last two years.

Federer’s original schedule, in a year that adds the Olympics during a packed hard-court swing after Wimbledon, included Indian Wells but neither the Miami Masters nor any of the three clay Masters that precede the French Open—though his camp afterwards suggested that one may be added in due course. But all that was before his unscheduled knee surgery, and so Monte-Carlo, where he has four times been runner-up but never champion, will be his first competitive outing.

Taking the long view, it seems a sensible decision: clay is a rather more forgiving surface than hard courts—on the legs in particular—and Monte-Carlo is just a short hop from his home, while Indian Wells brings with it not just hot, hard courts but a 12-hour transit and an eight-hour time difference—demanding at the best of times but clearly a challenge just five weeks after surgery.