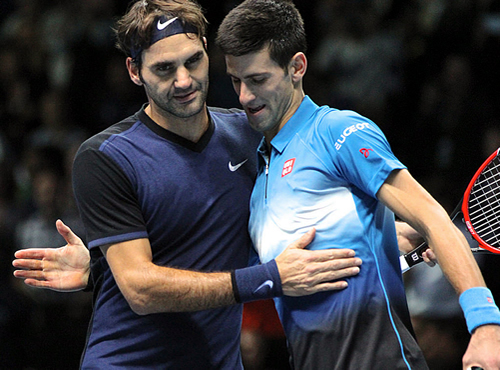 A year ago, the two best tennis players in the world, Novak Djokovic and Roger Federer, were contesting not just the final title of the ATP year but the No1 ranking.

As it turned out, Djokovic ended the season with both: He held off Federer’s late-season surge and unbeaten run at the O2 with his own unbeaten run to the final. Federer, after picking up a back injury late on Saturday night in a barn-storming semi-final, was forced to withdraw from their eagerly-anticipated face-off.

For their rivalry, both before and since, has become one of tennis’s finest, most intense, most compelling—second only to Djokovic and Rafael Nadal in times played, second only to Federer and Nadal in charisma—though on both counts, this rivalry is surely a close contender.

Since their first meeting almost a decade ago, they have met 42 times, and are poised at 21 wins apiece.

Since their first meeting, they have five times played five matches in a single year, they have spent more weeks at No1 than any other active players, and have won the World Tour Finals 10 times—Federer six times, Djokovic four.

But since that missed meeting in London 12 months ago, the rivalry as taken on still greater weight. Already they have met six times this year, all finals. In a season of just five losses, Djokovic has been beaten twice by only one man: Federer. And the Swiss is second only to Djokovic in titles won, with six—though make no mistake, this year, the super Serb has been the best of the best: 10 titles from 14 consecutive finals.

But what makes this rivalry doubly compelling is that they seem always to bring out the best in each other, pitching Federer’s all-court fluency, attack and tactical guile against the super-fit, super-flexible body and intellect of one of the greatest defenders in the game.

But here, with Federer pipped to the No2 post by Murray, the latest Swiss-Serb battle would be uncommonly early. Indeed since 2007, they had met before the semi-finals only once, also in the round-robin, 2013.

Over so many years and so many matches, as one champion to another, and now one father to another, their respect for one another has grown.

After Federer’s victory in Dubai, he said of Djokovic: “I think it’s really become a very nice rivalry. I think we play very nice against each other, and it seems people like the way we play against each other, as well. I don’t think we have to adjust our games very much against each other… we can just play our game, and then the better man wins… He’s become such an unbelievable player… and became the best mover in the game. It’s really a pleasure playing against him every single time.”

Djokovic responded in kind: “We always make each other play our best tennis. We require from each other the maximum focus and commitment, and that’s what raises the quality of the match.”

Both arrived here with indoor titles, too: Djokovic over Murray in the Paris Masters and Federer over Nadal in Basel.

One thing, then, was certain: this contest would be as eagerly contested as it was watched.

Djokovic certainly came out with all guns blazing, and had a break point in the very first game, but Federer, whose serving in the first set in particular was in a fine groove, held with an ace. It would be Djokovic’s only chance in the set, as both held strongly through to 5-5.

Then Federer held to love and, rather than coming forward in shock attacks, he pounded the baseline like a man a decade younger than his 34 years, slicing and driving on the backhand, hammering his forehand, with angle and down the line, and earned his first break chance.

It was clear in my head how I wanted to play

Djokovic, one of the most adept players as switching defence into sudden offence, replied in kind. But he could not close it out, and at the second time of asking, Federer did break, and the arena erupted as he sealed the set, 7-5, after an intense 44 minutes.

Federer got off to a racing start in the second set, too, converting the last of three break points. But again, Djokovic showed just how dangerous he is when under pressure. He broke back, but Federer was on a roll. He even got the rub of the net with two break points on the board, as a searing backhand down the line clipped the tape: He apologised, as protocol demands, but he had the 4-2 advantage.

It would not stop there, either. Djokovic was unusually profligate with errors in the final few games and Federer took full advantage. After a love hold, he broke again in the longest game of the match via three deuces and two break points. Djokovic cast the die at Hawkeye in the face of a closing winner, but it was a lost cause.

Federer had the win, 6-2, and that was not all. He maintained his record of never trailing Djokovic in their head to head and, more important, with Kei Nishikori’s three-set 7-5, 3-6, 6-3 win over Tomas Berdych earlier in the day, Federer also became the first man in the tournament to confirm his place in the semi-finals.

Djokovic was pragmatic, as a man who has won 10 titles and 79 matches this season should be: “You have those days when you’re not feeling your best—not even close to the best. Credit to Roger for mixing up the pace, giving me always a different ball. He used the slice and spin very wisely. He served very efficiently. I made a lot of unforced errors. Just handed him the win, especially in the second set… But, again, that’s sport.”

Federer, for his part, was not giving away too much about his tactical plan: “I might have to play him again!”

But he admitted he had not hoped for too much from this particular match: “I focused more on beating [Tomas] Berdych and Nishikori and let’s see what happens against Novak. That shows me that I didn’t expect this victory. But then again, all day I felt good about my chances. It was clear in my head how I wanted to play. Once the match went on, I felt like, I’m with him, I’m serving well, could play better from the baseline maybe at times… I was just hoping I was going to get a good return game, which I did get eventually.”

In truth, he looked and sounded rather less spritely in his news conference: He has the beginnings of a beard and a sniffle, and looked in need of some sleep, too.

But the pressure is off when it comes to Nishikori on Thursday—so who knows how he will play with the brakes off? For now, Federer has notched up his 50th win in his 14th consecutive year in the tournament, and in all that time he has failed to make the semis only once—and it is not this year.