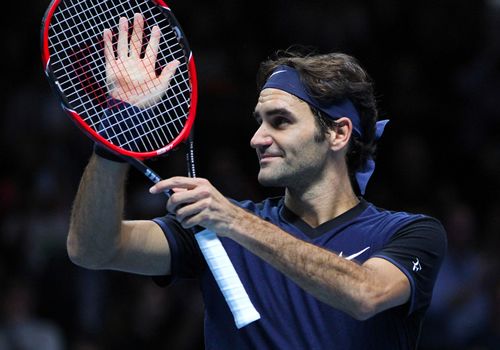 Roger Federer salutes the crowd after his win at the O2 Arena Photo: Marianne Bevis

With Novak Djokovic, the current world No1 and the best in the world by a country mile in 2015, on and off court in little more than an hour, it was the turn of the even more decorated champion, Roger Federer, to begin his campaign.

Playing in his 14th consecutive World Tour Finals, and with more titles, six, and more match-wins, 48, than anyone else in this tournament, it is little wonder he loves the event. But his last titles came back-to-back in 2010 and 2011, and now age 34, could he be a contender in this most demanding of events at the exhausting end of the long tennis season?

Last year, he arrived here still in the running for the year-end No1 after dropping to No8 earlier that year, but his run of five titles from 11 finals, plus a demanding semi-final win here late on Saturday night, ended his challenge: He withdrew from the Sunday afternoon title bout with a back spasm.

This year, he was edged out of the No2 ranking just a week before London—though could snatch it back from Andy Murray should he win here—but he has six titles from 10 finals. He is, too—arguably—a little fresher having played fewer matches than this time last year.

But as all the contenders have pointed out, each and every one of them has to hit the ground running in this round-robin format. A win is not necessarily enough, as David Ferrer learned to his cost in 2012: He scored two wins from three and still did not make the semis. Here, it can come down to the number of games won and lost… and Djokovic threw down the gauntlet with a 6-1, 6-1 win over Nishikori not five hours before.

In Berdych, too, Federer took on a man who could count some big wins among his six victories over the Swiss: The Dubai semi of 2013, the US Open quarters in 2012, and even in a Wimbledon quarter-final in 2011.

And once again, the big Czech man, playing in his sixth consecutive World Tour Finals, has enjoyed consistency of a very high level. With 15 quarter-finals or better at 21 tournaments, and over 50 match-wins for the fifth straight season, he has arrived in good form with two titles since the US Open. He arrived, then, in confident mood.

“It doesn’t really matter if you’re in one group or the other, they’re both extremely tough. It’s the best eight players in the world. I’m just glad to be part of it.”

He believes his coaching set-up that began almost a year ago is also yielding results.

“It’s been great. It’s going pretty well so far… I think there have been many things that are different, that are working well, and my game is improving and I’m really happy with my choice.

“I’ll go on the court and try to implement to my game, trying to still keep aggressive, take my chances.”

Berdych certainly has the big weapons if given the chance to use them—and that was the question. Federer’s increasingly aggressive tactics and fine net skills had proved very effective, even against Djokovic.

It looked as though the Czech’s own aggressive tennis would cause an upset after the first couple of games: He won seven of the first eight points to break for 2-0 as Federer twice double faulted. But order was quickly restored and Federer broke back to love and then held to love. A 0-30 start to the fifth and that had 10 points in a row for the Swiss.

Berdych survived a break point as he struggled to find his first serve, but at 4-4, Federer broke him to love and served out the set, 6-4, in just over half an hour.

That seemed to release the tightness that Federer showed in the early stages—and he began to attack the net more readily, having won just two points there in the first set.

It was intimidating stuff, not helped from a Czech standpoint by the statistic flashing around the court: Federer was 56-1 this year after winning the first set.

Federer broke immediately, and again in the third, and held serve for a 5-1 lead with a growing number of ruthless drop-shot winners that had Berdych shaking his head at his box in disbelief.

The Czech did manage to hold one more game, as much through Federer’s rash use of the SABR attack as anything: it failed on both attempts. But after 69 minutes, the job was done, 6-2, with the sound of the gauntlet being stuffed into his bag.

For it does, of course, set up the most highly anticipated match of the round-robin phase, the one that the O2 missed out on in last year’s final: a face-off between the two men with 10 World Tour Finals titles between them, Federer and Djokovic. And Federer was acutely aware that he needed to start rather better than today.

“Clearly was not the best start: Was a bad start. Was one of the worst starts I’ve had in years. No first serves, two double-faults, nothing coming from the baseline. So it was rough. But thankfully I was able to pick it up. I mean, the surface does play slow here. If you get to see too many second serves, clearly you can crawl back into the match. You can get your chances from the baseline to find rhythm quickly. Yeah, as the match went on, I definitely started to play better, started to serve better.”

As for Djokovic, “Maybe still some open questions in both our games, or in mine, getting rid of what happened in the beginning of the match. It’s going to be important not to have that against Novak in a couple of days.”

However, rather as Djokovic had done a few hours before, Federer slipped into ‘tennis ambassador’ mode to cap this day of champions at London’s O2.

Just as last year, he was presented with two awards that demonstrate the esteem in which the Swiss is held by both peers and fans. He has won, for the 13th consecutive year, the ATPWorldTour.com Fans’ Favourite Award and, for the 11th time, the Stefan Edberg Sportsmanship Award—voted for by fellow players. 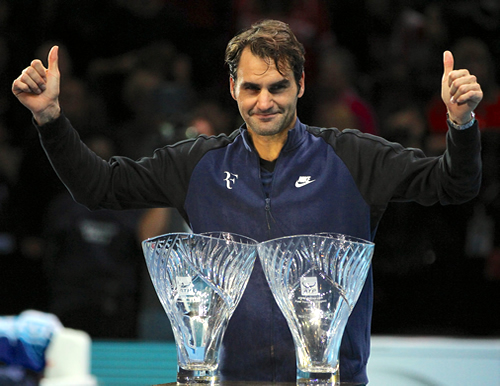 That Federer’s ‘mentor’ coach of the last two years has been Edberg simply squares the circle. Not only has the elegant serve-and-volley Swede brought a freshness and explosiveness to Federer’s tactics—and with them an upturn in his results—but he has charmed fans anew with his quiet modesty.

How could it fail? Well, with Djokovic on the other side of the net, even a tennis marriage made in heaven will be tested to limit.