There is no getting away from it. On the tennis court at least, Roger Federer has a few tough times ahead, writes Marianne Bevis 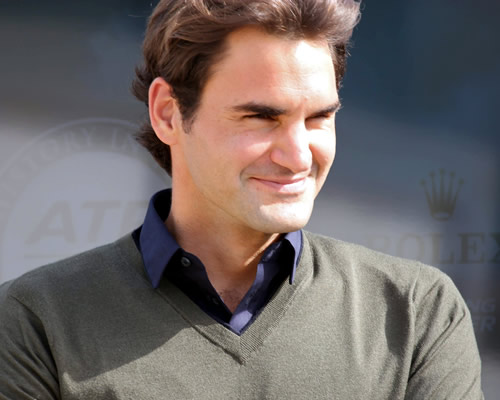 By almost any measure, it would be hard to describe the 24-carat life of Roger Federer tough—and with good reason.

Gifted the kind of talent with a tennis racket that other players envy, gifted the physical attributes that underpin a dancer-like fluidity, balance and foot-speed, gifted a supportive upbringing in a cosmopolitan city, and he embarked on his sporting career with a few advantages.

He was quickly a winner of the big tournaments, quickly a wealthy man and almost immediately in huge demand. But in the PR maelstrom that blew up around him, he seemed always to be the calm eye—polished in several languages, generous with media, fans and sponsors, comfortable and confident in his skin.

Even on the home front, Federer’s world unfolded with a storybook perfection that conspired only to draw more admirers. He married his childhood sweetheart—he and Mirka met at the 2000 Olympics and have been inseparable since—he became a father of twin girls, and he continues to travel variously with his father, mother and the close-knit team he’s had since the roller-coaster ride began.

With 13 years on the tour, he has not missed a single Grand Slam, and for the last decade, he has filled one of the eight slots at every World Tour Final and one of the top four rankings.

Passing the watershed of 30, some critics began to sharpen their valedictory pencils—until the Swiss went on a winning spree that began in home-town Basel, took in his first Paris Masters title, sealed a sixth World Tour Finals, sailed through Rotterdam, Dubai, Indian Wells, Madrid and Cincinnati, and took back the No1 ranking with a seventh Wimbledon title and Olympic silver.

Yet still most of his fellow competitors like him—he won their vote for an eighth Stefan Edberg Sportsmanship Award last year—and his fan following seems only to grow—he has won 10 straight ATP Fans’ Favourite Awards.

Of course much of both his professional success and his personal popularity stem from simple hard work and commitment. Even so—yes, it’s fair to say, things have gone pretty well for Roger Federer.

But there is no getting away from it. On the tennis court at least, he has a few tough times ahead. For the downside of that successful run a year ago is that, unless he wins those same events this season, he will see ranking points fall away. And if he fails to defend his titles, others can take the points in his stead.

It happened in Rotterdam not a fortnight ago: He made an unexpectedly early exit from the quarters and saw Juan Martin del Potro take his title. He is about to try and prevent the same happening in Dubai, where this week he pursues a sixth title. And he admitted the pressure:

“You know if you lose first round, 500 [ranking] points are gone. So you want to make sure you start the tournament well…The stadium is full and people want to see you win, so that alone creates a lot of pressure from the tournament directors, the people, everybody involved, myself. So there’s always pressure when I play.”

He would not comment beyond the Wild Card Malek Jaziri who he faces in his first match, but the quality of his opposition deeper into the Dubai draw will create further pressure. Jo-Wilfried Tsonga and Tomas Berdych have both beaten Federer in Grand Slam competition while, in the other half of the draw, del Potro and Novak Djokovic beat him in their most recent matches.

Perhaps it was no surprise, though, that much of his pre-tournament press conversation was devoted to questions of age, of his trimmed schedule, of his expectations for more success in Slams and, yes, rankings.

“I worked the schedule to have a few weeks’ vacation, and then four, five weeks—maybe six—of practice…My family’s also very important to me: I want to spend quality time with them.

“Combining that with what I did in December, in April, then again in June and again in October, should have an impact on my game and my stamina.”

On the question of winning more Slams, his role as a father came up again.

“I strongly believe I’ve got more [Slams] in me. “[But] I don’t want to be dependent on what the other guys do. I want to be in a position to be good enough to win, that’s why I am practising enough, being smart with my schedule, because I’m in a different situation than they are… It’s challenging, exciting, making the right decisions in my personal life right now. I have family—not many of the other guys have that. I have many more things to worry about than they do.”

Then came the inevitable reference to the passing years. Federer commented, in passing, about “other guys” being “right in their prime—23 to 27 or 28.” Did that mean he was past his prime?

“Obviously the game has developed, changed, it’s become more a game of movement, more side to side, than how it used to be. You adjust into that…Now the courts are a bit too slow [to come to the net] and guys at the baseline are more consistent. So you play more safe, play with more angle, whatever. You adapt in the process.”

“Right now I’m focused on right now…I just want to give myself the best possible chance to play as long as I can. Eventually it will be clear that it’s time to stop, but the time’s definitely not now. We know things change very quickly. Got to be ready and open for it, and I am. I’m not being naïve that I can play for another 15 years, but I’d like to give myself a chance to play for many more years to come. As long as I feel competitive and I enjoy it, I’ll keep playing a long time.”

And so to those rankings. With so many points to defend, with a reduced schedule—and clearly feeling the pull of his children—is the No1 ranking possible again?

“Absolutely it’s realistic if you play great. But you need to play absolutely great. The question is, will I be able to do that? Or will I be allowed to…I know it’s possible. [But] for that, I would have to win big tournaments. If things fall into place, anything is possible.”

So in viewing the gilded Federer life, it’s worth noting the unwavering self-confidence required by a high-achieving athlete, but here leavened by a pragmatic streak. Should his playing career end tomorrow, one senses he will be just as up-beat—and probably just as successful—in the next one.