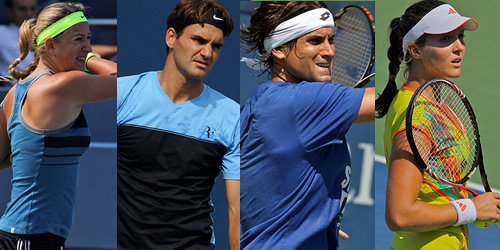 The 2013 Australian Open gets under way on Monday Photo: Marianne Bevis

As the first Grand Slam builds a head of steam towards its start on the second Monday of 2013, tennis can depend on some familiar storylines and protagonists to permeate the year.

Can anyone outside the ‘big four’ of men’s tennis win one of the Majors? Only one, Juan Martin del Potro, has managed it in eight years, but it was in this month in Melbourne 2005 that another name, Marat Safin, interrupted the ‘Federer flow’.

Will the women’s tour find a champion or two with the same enduring dominance?

With matches grow longer and tennis more punishing every year, will all tournaments be forced to adopt a final-set tie-breaker?

Will the elements take centre stage again? Rain forced the postponement of the finals in Rome, Paris and New York, and with a third Monday added to the US Open schedule, could rain bring a Tuesday conclusion—and the ire of the players?

And after the decades of Grand-Slam-winning prodigies—the Borgs and Beckers, the Austins and Wilanders, the Grafs and Seles’s—what has happened to all the teenage stars?

Some of those themes will persist among a flurry of new ones—but which ones?

1) The dominance of the top men is a theme that could fill 21 questions on its own. First, though, can Roger Federer, in the year he turns 32 and his twins turn four, continue to hold off the top 10? He has trimmed his schedule in a bid for longevity and Grand Slam success, but despite winning Wimbledon, the big men behind him have posed problems: Tomas Berdych at the US Open, del Potro in Basel and the WTFs. Perhaps his cause will be helped…

2) …if the ATP and ITF encourage more variety in court speed, so that attacking players can flourish in some tournaments and baseliners/counterpunchers can thrive on others? Which leads to another bone of contention…

3) …can the tour succeed in speeding up play between points? There are signs: stronger enforcement of the 25-second rule between points in ATP matches or a penalty, and a trial of no ‘let’ serves on the Challenger tour. Will officials at the Majors—where the time limit between points is 20 seconds—follow suit?

4) Another over-30 Grand Slam winner, Serena Williams, returned 18 months ago, after a year of illness and injury, to dominate the women’s tour as completely as she had a decade before. She goes into the Australian Open having won 52 of her last 54 matches, and unbeaten by the two women ahead of her in the rankings, Victoria Azarenka and Maria Sharapova, since 2009 and 2004 respectively. Can she reach the final in Melbourne to reclaim the No1 ranking?

5) Or will Azarenka, who kept the top spot for a year, build on her successes of 2012 and become a long-term rival? She is only 23 and still evolving. And can Sharapova continue to stave off injury and improve her movement?

6) And what of the other top-10 contenders? No4 Agnieszka Radwanska has overcome various injuries to mix with the big-hitters through her court-craft and tactics. But she lost all six matches in 2012 against Azarenka, has never beaten Williams and has a 2-8 head-to-head with Sharapova. Can she realistically rise any further?

7) New faces such as Angelique Kerber and Sara Errani surged into the top 10 but do they have the capacity to improve further, or will they swap places with a new rank of improvers—Maria Kirilenko, Dominika Cibulkova and Varvara Lepchenko—just as they usurped new faces such as Sabine Lisicki and Andrea Petkovic the year before?

8) Or will it be younger faces that break out this season? One American who Williams has high hopes for is teenager, Sloane Stephens, who has just made her top-30 debut, claiming a seeded place in the Australian Open draw.

9) What lies ahead for the British youngsters? Heather Watson and teenager Laura Robson, have broken into the top 50—Watson winning her first title at the end of 2013, Robson reaching her first final. Could one of them also be a Grand Slam seed by the end of the season?

10) As for the men, 2013 could be the year that slow-burn youngsters begin to make their move. Already 2013 has seen the flair of Grigor Dimitrov take him, at 21, to a first ATP final and a career high ranking of 41. He flirted with the top 50 in the summer of 2011, wowing Wimbledon in his exhibition-style encounter with Jo-Wilfried Tsonga, but now looks a more mature player—and a new coach and training centre show serious intent.

11) Also making a move is the rangy Pole, Jerzy Janowicz, who first made an impression against Murray in Davis Cup in 2009, but the last six months have seen his big frame and game take him from outside the top 100 to 26. Others ready to impress? Martin Klizan, 117 this time last year and now at No30; Benoit Paire—95 to 43; David Goffin—174 to 50. Meanwhile, the frontrunner of the new generation, Milos Raonic, raced inside the top 20 in 2012 and won two titles from four finals. There is more to come from him, too, but will he stay ahead of his peers?

12) At the other end of the age spectrum, maturing like wine, are Juan Monaco, Philipp Kohlschreiber, Andreas Seppi, Julien Benneteau and Feliciano Lopez, all reaching career-high rankings in 2012—and not forgetting Tommy Haas, who returned to the top 20 from 204 in the space of a year. Will they hold their own against the new wave?

13) What records might be broken this year? Serena Williams is half way to a second non-calendar-year Grand Slam, the first coming 10 years ago. She will be favourite to take Melbourne, but the last, on Paris’s clay will be a bigger challenge.

14) Federer equalled the Wimbledon record of seven titles in 2012 so could take the record entirely at the All England Club this year. If he wins his fifth in Australia and a sixth at the US Open, he would take the Open era records in those, too.

15) As for Nadal, absent since Round 2 of Wimbledon, will he be fit to defend his record-breaking sequence of titles in 2012—Barcelona, Monte Carlo, Rome and the French Open?

16) Nadal’s woes have opened new opportunities to David Ferrer who, with more titles and match-wins in 2012 than anyone else, is poised to overtake his compatriot in the rankings for the first time, and reach No4 for the first time in six years. He will need another outstanding year to stay there—with or without Nadal—because…

17) …a big man looks set to make his move. Del Potro reached No4 four years ago after winning his only Grand Slam in New York. Knocked back by wrist injury, 2012 proved to be his comeback, with four titles, a bronze medal and capping the year with two wins over Federer. And if it is not the Argentine who breaks the “big four” stranglehold on the Majors, could it be…

18) …Berdych or Tsonga, long-term presences in the top 10? The Frenchman has been a Grand Slam semi-finalist in each of the last three years while Berdych has reached the Wimbledon final and two other semis—most recently beating Federer in the quarters of the US Open. The Czech in particular seems to grow in confidence, albeit slowly, with each year.

19) On the subject of Grand Slam winners, Petra Kvitova was many people’s favourite to dominate the tour in 2012 after a break-through at Wimbledon and the WTA Championships in 2011. Yet she had the look of a rabbit caught in the headlights and slipped from No2 to No8. Will she bear those expectations more easily in 2013?

20) The confidence of Caroline Wozniacki, No1 at the start of 2012 and now No10, was undermined by the power players around her: She has not beaten a top-5 player for over a year. Can she solve the problem without a big weapon of her own?

21) The ATP rankings are 40 years old this year. Can Murray be the first Briton to top them? Djokovic remains his chief barrier, but Murray had a couple of significant wins over him: at the US Open and the Olympics. He can gain points over his rival in the first half of the year, though the extent of Nadal’s success on the clay may prove to be the key.