World No2 gears up for Swiss Indoors Basel 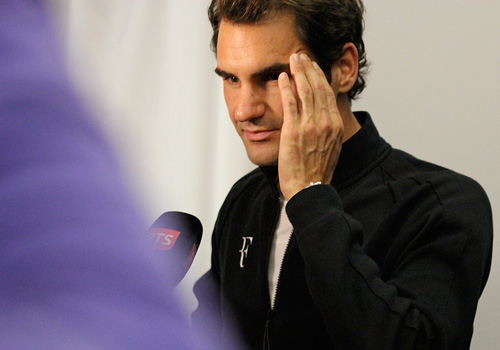 Basel is the city that is in Roger Federer’s bones.

He was born down the road, was a ball-boy here as a youngster, and first played at the Swiss Indoors as an 18-year-old.

Now he is about to embark on his 15th appearance at an event he has won five times and been runner-up a further five times—a 51-9 record.

So it is probably safe to say that this cosmopolitan corner of Switzerland, this small and perfectly-formed city of Basel, is in the Federer DNA.

And while life may have changed beyond recognition since the boy from Basel lost his first match here to Andre Agassi in the first round, since he began his journey to a record number of Grand Slams and weeks at No1, since he became the father of two sets of twins, he seems to have changed remarkably little.

He has proven this year still to have the zest for competition and for winning that he had more than a decade ago. After a tough year of back problems, a slip in the rankings, and a haul of just one title in 2013, he returned to the fray this year with a new mentor, new racket and new attack in his game.

Yet it was the style of his winning that was just as revealing: a roaring throw-back of the head, reaching to the sky with fingers pointed in victory. It may have been his first title rather than his 81st. 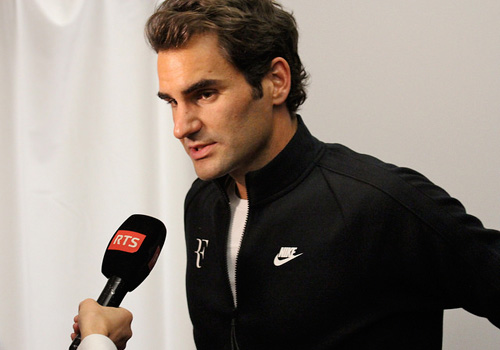 The style of the tennis he played, too, left no doubt about the work he had put into his fitness. He described it after beating Novak Djokovic in the semi-finals:

“If you come to net, you need to be very agile and explosive. I had it all today. I’m very happy that I’m feeling so good every single day… I think attacking tennis is the most exciting. When I can do it myself, it’s great.”

He looked and sounded like a kid in a sweet-shop.

So from a ranking of No8 in March, he is back to No2, and still has a packed schedule and high ambitions for 2014. He could win a record seventh World Tour Finals and a first Davis Cup. He could even reach No1—though has said that the titles are his priority. A nice position to be in, and one that took him a bit by surprise:

“I mean it feels great. I’m happy I’m playing so well since the birth of Leo and Lenny. Happy that we made it to the Davis Cup final… And then that I’ve got so close to being No1 has come as a bit of a surprise for me. It’s a different year-end than I thought it was going to be!”

Before all that, of course, comes Basel and his shot at a sixth title where he is already the No1 in his fans’ eyes—though along the way he has fitted in a three-day clay block, clearly mindful that France has chosen the red stuff for that Davis Cup showdown.

So had he, I wanted to know, ever considered cutting back on his schedule?

“Before Shanghai, I was maybe going to skip it, but in the end I decided to go. And if Shanghai didn’t go well, I may even have opted to skip Paris to practise on clay instead. But now with the situation as it is—feeling good, playing well, having had almost two weeks of vacation after the Davis Cup semis—I actually feel it’s the year-end [swing] rather than the end of the year.

“I feel like it was very crucial for me to take that vacation, otherwise I would really feel it right now as a tough grind. Then I’m going to see how it is with Basel. I’m happy I didn’t feel too tired or injured after Shanghai or otherwise may not have played here—was always going to be an option to some degree just for safely. But I feel good enough.”

The result is, he’s still feeling—well, like a kid in a sweet-shop.

“We did discuss in the team internally what was going to be the best and what was feasible with the energy, what’s the passion, what do you want to do. But I’m happy we decided to play here, and then most likely I’ll play Paris too.”

Federer does have one thing in his favour: The man who beat him in the last two Basel finals, Juan Martin del Potro, is absent with injury.

But in the Argentine’s stead is Federer’s nemesis Rafael Nadal, back for the first time in a decade. Before that, too, there are dangerous young stars lurking: Jerzy Janowicz in Round 2, and then Grigor Dimitrov in the quarters—just like last year.

Federer has also drawn fellow home favourite, No3 seed Stan Wawrinka, in his half. The Australian Open champion is making his 11th appearance in Basel and hoping for his first win here in three years.

So Federer will have to be on his game, and will have to adapt to the indoor hard courts smoothly after that clay venture.

For the fans, if for nothing else, he will want to put on a good show. But if he can also win a few matches here and in Paris, he will probably be just as keen to chase that No1 ranking too.

And if the Federer body and spirit continue to defy their 33 years as they have done this year, who would bet against it?

Rafael Nadal: It is ‘beautiful’ to be in rival Roger Federer’s home town Basel