Roger Federer: I feel like I’m playing in Basel for my home people 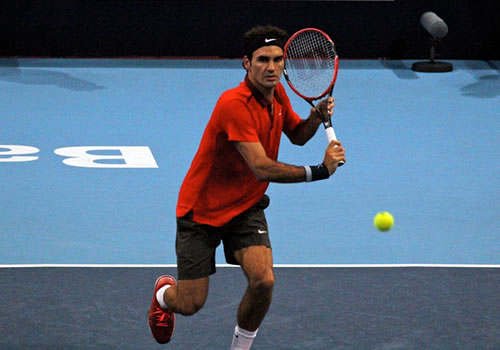 Roger Federer in action in his hometown of Basel Photo: Marianne Bevis

There were moments—several of them—when it looked as though Roger Federer may not play his hometown tournament in Basel.

He had a lot of matches in his legs already, and more wins than anyone else. The last of them came from the long-haul hop to Shanghai and a run to the title, but within days of his return, he tweeted a photo of himself wearing clay-caked shoes. He was getting in some unseasonable practice on the red stuff in anticipation of the Davis Cup final in Lille at the end of the season.

It is not what most tennis players would do: End the long hard-court season that sweeps from north America to Asia with a diversion on clay before the tour heads indoors for the exhausting race to the ATP World Tour Finals.

He certainly kept a low profile in the run-up to the Swiss Indoors, postponed his pre-tournament press twice, and did rather less of that—not until Tuesday—than has become the norm.

And he had, he admitted, considered not coming: “I’m happy I didn’t feel too tired or injured after Shanghai or otherwise may not have played here—was always going to be an option to some degree just for safely. We did discuss in the team internally what was going to be the best and what was feasible with the energy, what’s the passion, what do you want to do. But I’m happy we decided to play here.”

He made light of the switch from hard-to-clay-to-indoor, as well: “The idea was just to go on the clay a bit, feel it again, remember how it was, so when I play matches at the Davis Cup, I have a memory that’s closer than the French Open.

“I’ve been on the hard courts for a while now, so there was always going to be a change regardless from Shanghai to the conditions here in Basel. The switch was easy back from the clay to this here: It plays pretty slow here, so from that standpoint, I was already playing with the balls that you play with here.”

There was, though, a little more to story, and perhaps a little more behind the low profile and reduced press. Federer confirmed to the Swiss media that, as he had no contract here, he had signed up to the tournament just as any other player would do—and so had no obligation to play. He had even considered pulling out of the singles draw and simply playing doubles with Stan Wawrinka.

Instead, it is Rafael Nadal who has a three-year contract with the tournament, though Federer stepped into that headliner breach last year when Nadal was unable to take part.

It is a situation that has left many shaking their heads: That Switzerland’s favourite son, 10 times a finalist and five times champion at the tournament, should seemingly play second fiddle to his long-standing rival. The event is, after all, played in Federer’s city.

Perhaps it was to this that he alluded in an interview for ATPWorldTour.com.

“Clearly I’m very excited being here, but maybe it’s not that dream come true any more like it was in the beginning. I’ve been able to win the tournament now; I’ve been able to play in front of my family, my friends, so many times here that, with the hiccups I’ve had with the tournament here in previous years, it’s taken the fun away a little bit.”

There are, of course, some rather large professional imperatives in playing this tournament this year. As he admitted, he was surprised to find himself competing for the year-end No1 ranking, and knows he has to win a couple of titles to keep that hope alive.

He is also feeling healthy, fit and confident in both his mental and physical resources. He has an ambitious schedule, but he has ambitious targets, too. All good reasons to see if he can win a sixth time after losing out in the last two finals.

He started in very fine form, too, beating Gilles Muller in a pacey 47 minutes for the loss of just three games. Muller is ranked at 51, but that masks the great season he has put together—the biggest jump in the top 100 this season, climbing more than 300 places after winning five Challengers from seven finals.

Federer took a couple of games to warm up, opening with a double fault, but then after hitting four winning serves to hold, he went on the rampage against his leftie opponent to break. That opened the floodgates, and Muller could only shake his head as he watched Federer chase down a drop and skim a forehand past him to break again.

The top seed notched up 12 winners in taking the first set, 6-2, and did not lose a point on serve in the 6-1 second set.

He next plays Denis Istomin, who took out Jerzy Janowicz with remarkable ease, 6-1, 6-1. And that will be a very different match, as Federer admitted later:

“We’ll see how well I play tomorrow. I definitely got some information about how the hall plays again, how the conditions are. But there were not many rallies out there, he was a leftie—tomorrow is going to be quite different.

“[But] it’s great not to have wasted any energy because I have a lot of tennis to play in hopefully the next few weeks, and I remember how tough it was in Shanghai after a very difficult first match… now I don’t have to fear that. I can relax tonight.”

He was into press unusually quickly, raced through his three languages, did his radio in two languages, and made a hasty exit. He intends not to waste an ounce of energy here either on court or off it.

Even so, when it comes right down to it, no-one can take Basel out of the boy.

He concluded his interview for the ATP thus: “I really I feel like I’m playing here for the home people that are from Basel—I’m from Basel, too—and I love playing here, and that’s the reason why I’ve shifted a little bit: to play the tournament today.”

And the Swiss fans made their gratitude very clear.