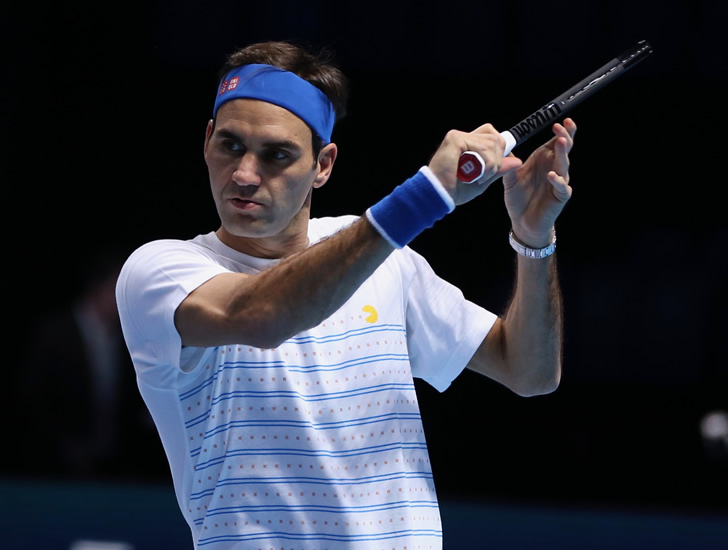 The Nitto ATP Finals this year must surely feature one of the oldest line-ups this century, continuing a theme that has been unfolding for several years.

Seven of the top 10 are in their 30s, and although Rafael Nadal, 32, and Juan Martin del Potro, 30, have been unable to take up their places at the O2 in London due to injury, five of the eight who are here are in their 30s. And that includes the two debutants in the field, 32-year-old Kevin Anderson and 33-year-old John Isner.

But one man is pushing the average age of the eight in London up just a little more than the rest, 37-year-old Roger Federer.

It is an extraordinary feat from the Swiss, his 16th time among the elite at the end-of-season finale, a continuous run since his first as a 21-year-old in 2002 that was broken only in 2016 by a season cut to six months and seven tournaments by knee surgery.

There were naysayers who suspected that Federer’s first time under the knife would mark the end of an already remarkable career as he headed to his 35th birthday, but then the Swiss star’s career was not your average one.

There had already been talk of decline, of advancing years, and of the ‘R’ word before 2016, for Federer had been fending off retirement questions since, in 2012, he won his 17th Major at Wimbledon and came away from his fourth Olympic Games with a singles silver. He was, after all, on the verge of 31.

Sure enough, 2013 was a tougher year dogged by back problems: It yielded only one title. And his younger rivals, especially Novak Djokovic, had ousted him from the top of the ranks, and would take over the reins of the ATP Finals. Federer’s sixth end-of-year title came in 2011, the next four went to Djokovic, and in 2016, Olympic and Wimbledon champion Andy Murray would win his first at the O2 and rise to No1.

But how wrong they were, those naysayers. For 2017 saw a mentally and physically refreshed Federer bounce back to win the Australian Open, Wimbledon, and three Masters titles. This year, he won his 20th Major in Australia and reclaimed the No1 ranking, the oldest to top the charts, and five and a half years since he last held it in that same 2012.

Yet 2018 has been plagued more than ever by questions about retirement, despite a 17-match winning streak at the start of the year, and stacking up four titles from seven finals. For most, that would be a good year, and Federer said as much when he was challenged in his pre-tournament press about another failure—his lack of victory in London since 2011.

“I think it didn’t happen [partly] because of my opponents. Dominating the field is not something that comes very easy. It’s really only Novak at this point who can say, if I play the way I’ve played the last few months, maybe I can also win the Finals, but that is not a given, because especially in best-of-three sets, margins are slimmer so you can slip fast.

“I’ve played well even though I didn’t end up winning. It doesn’t feel it’s that long ago.”

Of course, in tennis years, it is long ago, but in Federer years, perhaps less so. He went on to reflect on 2018:

“I’m very happy I won a Slam and very happy I played as well as I did throughout the season. Maybe Wimbledon and the US Open didn’t go the way I was hoping, but they were perhaps the only disappointments this season.

“I won a bunch of tournaments again, played a great Australian Open, won my home tournament in Basel, won the Laver Cup, played well at the Hopman Cup [which he won with Belinda Bencic], and stayed injury free for most of the year. So I’m actually very happy with the season so far… but I hope I don’t go on vacation with three losses!”

To avoid three losses, he will have to beat Kevin Anderson, who won their Wimbledon tussle, Dominic Thiem and Kei Nishikori, but the withdrawal of Nadal did boost Federer to No2 seed and into the other round robin group topped by Djokovic.

The world No1, now age 31, has also enjoyed a renaissance season after a similarly long absence and elbow surgery. Djokovic has been almost unbeatable since June, including two wins over Federer—the latter in one of the thrillers of the year in the semis of the Paris Masters.

And therein lies the dilemma for the young players, for it is not only Federer who defies the years.

No man aside from Federer, Djokovic, Nadal and Andy Murray—and do not be surprised if he also bounces back from surgery with renewed vigour next season as well—have held the No1 ranking for almost 15 years.

Fifty of the last 60 Majors have been won by Federer, Nadal and Djokovic, and all are now aged between 31 and 37. As for the other 10 Majors, two winners retired long ago, and Murray (3), Stan Wawrinka (3), Marin Cilic, and del Potro are also now in their 30s.

Such is the prospect for the rest of the men’s tour. However, there are certainly signs that the #NextGen wave—those aged 21 and under—are beginning to flex their muscles.

Alexander Zverev is at the sharp end of that group, a precocious talent who hit 6ft 6in while still a teenager, has been mentored by Federer, and has won three Masters titles from five finals. He has also beaten Federer twice, but has no illusions about the scale of his idol’s achievements.

“I don’t know what I’ll be doing when I’m 37. I hope I’m still playing tennis but nobody’s Roger. That’s a great achievement in itself [that he’s playing here for the 16th time], and that he’s won this title six times. Obviously, we know his history, he’s won so many titles that’s why he’s considered the greatest player of all time. What he’s doing at 37 years old, we’ve never seen before, and I’m not sure we’ll ever see again.”

Zverev is the youngest in London, a full 16 years younger than Federer, but has made it here for the second time. He is the real deal, and the young colleagues he could have joined at the #NextGen Finals in Milan, Stefanos Tsitsipas and Alex de Minaur, are also ascending rapidly, along with Borna Coric—also with a win over Federer—and Karen Khachanov, who beat Djokovic to win the last Masters of the year in Paris.

So while there are perhaps signs that a new generation is closing the gap just a fraction on their elders, it is too early to count out the same men who topped the ranks a full 11 years ago, and still do today: Djokovic, Nadal and Federer.

And all still have ambitions for more. Djokovic is looking to equal Federer with his sixth title at the O2, while the Swiss has another big target in view, his 100th career title. Will he do it in London?

“I don’t think it matters really where I win my 100th, as long as it happens at one point. I think if I won the title here, it is more about winning the World Tour Finals and not about winning my 100th.

“I love playing this event, always have since the first in 2002, that was a massive highlight in my career and I had a good run… I know it goes hand in hand at this point, but the focus is on trying to have a good tournament here and the 100 happens when it does—I hope sooner rather than later, but I’m happy to wait.”

So retirement is not part of the picture just yet: Federer still has fish to fry.