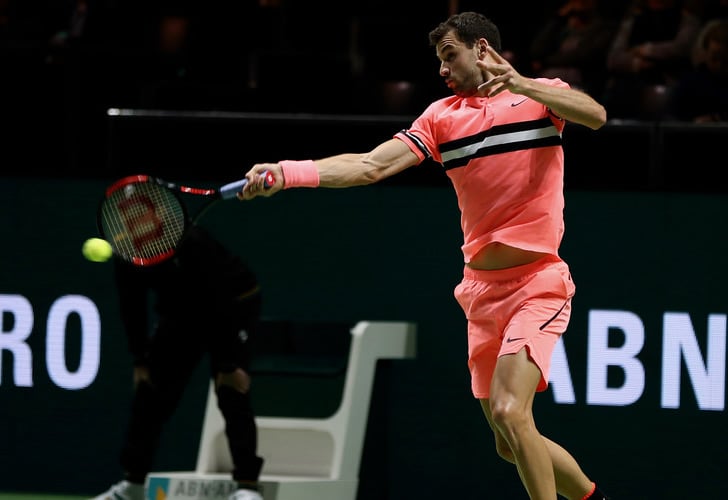 The tournament had begun at a steady pace with world No4 Alexander Zverev headlining on Monday, ably supported by No17 Tomas Berdych.

By Tuesday, the action had cranked up: former champion Stan Wawrinka, last year’s runner-up David Goffin, and some of the brightest NextGen talents, Karen Khachanov and Daniil Medvedev, were supplemented by a plethora of Major doubles champions packing the courts throughout the Ahoy arena.

But Wednesday took the schedule up a big notch, with four of the top seven players in the world all converged on the Ahoy, along with former Rotterdam champion Berdych, and the two finalists in Montpellier last week, Lucas Pouille and Richard Gasquet. Reason enough, that, for both Frenchmen to be pushed to Wednesday for their opening matches.

So it was pure gold inside, while the flags across the wind-swept sunny plaza outside the Ahoy picked up the gold theme. And the crowds poured in—the first sold-out day and night of the week.

Of course, those tickets flew off the shelves a week ago, when Rotterdam became the venue for Roger Federer’s assault on the No1 ranking. He would begin that campaign—and a run to the semis would do it—Wednesday evening.

Federer, it transpired, could have played Tuesday but chose Wednesday:

“To spend one more day with the family… I left them all to come here, so in a way I’m torn but I’m happy to be here now and I got half a day [Sunday] with the family so it doesn’t make the trip so long.”

Unfortunately for Gasquet, his three days’ rest after Montpellier was not enough, and the injury-prone Frenchman was forced to retire with a groin injury before the schedule was barely half an hour old. His younger compatriot, qualifier Pierre-Hugues Herbert, advanced to meet Daniil Medvedev in Round 2.

Could Pouille, the No7 seed here, stem the French exits—for Jo-Wilfried Tsonga and Benoit Paire withdrew before the tournament—and better the exciting 20-year-old Russian, Andrey Rublev?

The NextGen star is one of the highest ranked among his number, currently 34, won his first title in Umag last summer, made the quarters at the US Open and the final of the NextGen ATP Finals in Milan. Already this year, he had made the final in Doha, and the quarters in Montpellier last week. The slender youngster was growing into his explosive game quickly, and that showed against Pouille.

The 23-year-old Frenchman got off to a good start, 4-1, but Rublev soon broke back and held for 4-4. Pouille was under heavy pressure in the ninth 16-minute game, but managed to save six break points. However, the Russian did not hold back, and grabbed the break at his next opportunity with a roar. He went on to serve out the set, 7-5, in just under an hour.

Now clearly at home on the vast centre court at Ahoy, Rublev wasted no time in breaking in the third game of the second set, broke again for 4-1, and held to love, 5-1. He suffered one blip, conceding a break in the eighth game, but eventually closed the deal with a love hold, 6-4, after an hour and a half of impressive tennis. He had dropped only one point on his first serve in that second set, 15/16.

Rublev will next play Damir Dzumhur, who beat Marius Copil, the runner-up in Sofia last week, 6-4, 6-4.

The job facing No2 seed Grigor Dimitrov was far from easy for a first-round match, against the 41-ranked Yuichi Sugita. The Japanese man scored his first top-10 win at the Australian Open last month, won his first title last summer, and got to a new career-high last September. But the Bulgarian, enjoying some of his best ranking, form and results in the last six months, had won both their previous meetings.

The first set, even so, was a close affair, closer than the 6-4 scoreline suggested. The Japanese man is fast and nimble, but his short stature means his serve is more vulnerable than that of 6ft 3in Dimitrov. The winner of the World Tour Finals also took advantage of the quick courts here to attack the net, and dropped only two points on his first serve, offering up not a break chance in the process.

That said, Sugita held off his opponent until the last game of the set. And then in the second, he drew first blood with a break in the third game. What’s more, he held onto his lead with his great movement, accurate striking, and varied direction to each corner of the court.

Not until the last gasp did Dimitrov get the break back to make it 5-5, and they headed into a tie-break. Now Dimitrov found his best defence, and a couple of outstanding forehand winners, to edge a 5-2 lead, but Sugita found some moments of brilliance, too, to make it 4-5 with two serves to come.

A forehand winner apiece later, and Dimitrov had match-point on his own serve, and that was enough. It had ended up a tougher match, and a finer contest, than anticipated but Dimitrov advanced after an hour and 46 minutes, 7-6(5).

Considering Dimitrov had pulled out of the defence of his home title in Sofia last week, he was happy with his fitness and form. He said:

“I hadn’t played matches in three weeks, and I played a quality opponent, I had to be patient… The body is responding well. I feel normal pain here and there, but right now, it’s all about playing matches.

His next is against Filip Krajinovic, against whom he has a 3-0 winning record.

The day’s schedule was completed soon after when Berdych advanced to a quarter-final showdown against Goffin after beating Viktor Troicki, 6-1, 6-2, in exactly and hour.

Only one match remained to be played in Round 1 and that would draw a whole new crowd to the Ahoy, though probably no less excitable a crowd than the Kids’ Day version that brought such a buzz to the Ahoy on Golden Wednesday.

For now it was the arrival of Federer, and the start of that campaign for No1.

Rotterdam 2018: Roger Federer takes one step nearer to No1, in just 47 minutes