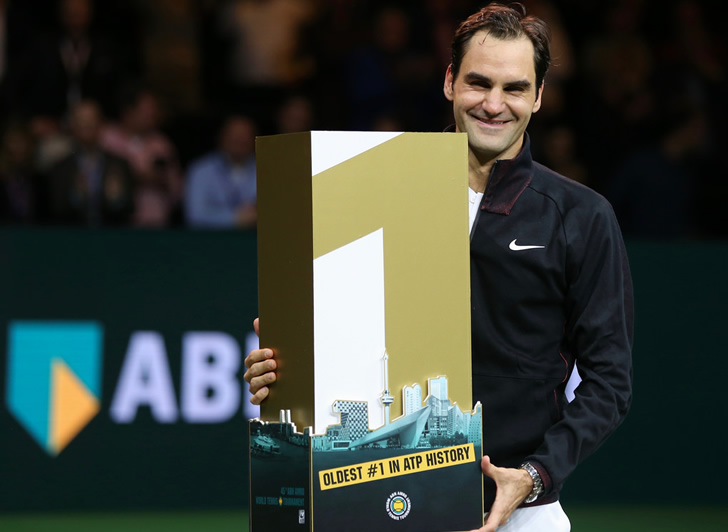 The anticipation had been climbing since Roger Federer returned to the Australian Open and defended his title.

And as soon as he belatedly took a Wild Card into the ABN AMRO World Tennis Championships, less than a week before the first ATP500 of the year got underway, the die was cast.

The Swiss had refused to discuss the pursuit of No1, refused to consider it as a possibility, until after that Australia victory. But as soon as he committed to the Rotterdam tournament—which opened the chance to earn enough points to overtake Rafael Nadal before the Spaniard played again in Acapulco—the message was clear.

Federer confirmed his intent quickly, not just by heading straight to the Ahoy’s main arena for a practice session when he arrived Sunday night, but with his words to the media the following day.

“I always said I would only look at the rankings once the Australian Open was over… I thought that by not winning the World Tour Finals that the No1 was never going to happen again, or it’s going to be out of sight. And that’s how I played the Open, not thinking about the rankings.

“But I always had the flexibility in February, and I looked at all the different options and I just thought I’d love to go play Rotterdam and give it a go there—then always have the option to go to Dubai. [Now] our team is very excited that I’m here and giving it a go.”

And so the head of steam developed, quietly at first when the draw threw Stan Wawrinka into Federer’s path for the vital quarter-final match that would deliver the necessary points. But once his compatriot fell in the first round, Rotterdam went into overdrive.

Of course, while Federer continued to talk of excitement and ambition, he would not take things for granted. And his second match against Philipp Kohlschreiber showed why—a far closer contest than his 12-0 head to head suggested it would be. Federer served well enough to get the job done, and now he faced the Netherlands top-ranked player, Robin Haase, a regular practice partner and former colleague on the Players Council. They knew each other well, but Federer had not dropped a set in either of their previous matches.

That record-making, record-breaking No1 was now within touching distance.

For let’s be clear: This was not simply a question of reaching No1. Federer had long held the record for weeks at the top, 302, and for the longest consecutive streak at No1, 237. But it had been well over five years since he last held the No1 ranking, which he earned with the 2012 Wimbledon title.

He turned 30 just weeks later, and did not win another Major until he was 35, the Australian Open in 2017, and that itself might have created the fairytale conclusion to his career achievements. For less than a year before, he underwent knee surgery in February, played only 18 more matches, and ended his season after Wimbledon.

But come Australia last year, he put together one of his best Major performances as the No17 seed, beating four top-10 players, three of them over five-sets—including his nemesis Rafael Nadal. He had clearly not been idle during his time away, either, and it was not just a more powerful retooled backhand that made all the difference.

He explained this week: “Physically and mentally I was regrouped, refreshed. Having a major break for me was something so different that I think it helped me a lot in my approach in matches, seeing things from a different angle after playing 17 years… The backhand on top of it gave me a big boost, especially in that [final] Rafa match. You need reassurance, confirmation sometimes. That 5-setter with Rafa [in Australia] was the ultimate test.”

Now, he was facing the very real prospect of regaining No1—and the oldest player, man or woman, to top the rankings pile.

Even so, he had appeared supremely relaxed, cheerful, and chatty here: It is a tournament where he feels at home, where he earned his first wild card, almost two decades ago. But make no mistake: this had become important. Under the surface, there was tension:

And the opening set was riddled with tension on Federer’s side and nothing-to-lose tennis from Haase. Federer’s greatest weapon, his serve, would not perform, dropping to 38 percent at one stage. That he saw three break points come and go in the second game did not help.

Come the ninth game, Federer double faulted to open, faced two break points, and Haase passed him for the break. The Dutchman served it out, 6-4.

Then the fire was suddenly ignited. Federer reeled off eight straight points, and then held for 3-0. Another break for 5-1, another hold to love, and he had swept the set, 6-1. His serving was now at 70 percent, and he began to play with freedom and confidence. He broke immediately with a wonderful flicked backhand winner, broke again for 3-0, and once more to win set and match, 6-1.

In the end, then, it was a masterclass, but all the more moving at seeing this evergreen champion still gripped by nerves, still wanting to intensely to win, really earning that No1 ranking.

It was appropriate, of course, that Rotterdam’s Tournament Director, a former Major champion himself, Richard Krajicek, was on hand to deliver a large No1 to an emotional Federer. And soon, the statistics were handed round, just to make sure that the sporting world understood this 36-year-old’s achievement to his fullest:

14 years since Federer’s debut at no1; more than five years since he last held the top spot—the longest gap on record; also the longest gap between his first and most recent day as No1; and the oldest No1, three years older than Andre Agassi, one older than Serena Williams. And all that on top of extending his own record for weeks as the top once Monday comes around.

Of course, there is still the small matter of a title to be won in Rotterdam, and asked a few days back what other aims he had, perhaps getting to 100 titles ‘would be nice’. He has 96. But his words a few days back sum up the achievement as well as any statistics.

“It is a mountain to climb, not just in Rotterdam, but I’ve had to win a lot of matches in the last year to even get into this position. Shows you that No1 is a tough place to get to: you’ve got to be successful, and healthy, and over a 365-day period. This is not something I actually aimed for when I came back from surgery, [but] I would have regrets if I didn’t come here and try. That’s what I came for.”

He left, having answered questions in English, French and German, with a cheery “See you tomorrow,” for he will run the media gauntlet again, win or lose, after his semi-final match against Andreas Seppi, who beat Daniil Medvedev, 7-6(4), 4-6, 6-3.

In the bottom half of the draw, the seedings have held firm. No2 Grigor Dimitrov, who has looked in better form with each match here, resisted the impressive Andrey Rublev, who will himself rise to a new career high of 31 next week unless Haase goes on to win the Rotterdam title.

Considering the Bulgarian arrived here with the remnants of a shoulder injury, his serving has impressed. He fired down 12 aces against Rublev, and made almost 70 percent of first serves. A break in the fourth game of the first set, and another in seventh of the second set, were enough to take the match, 6-3, 6-4, in an hour and a quarter, having shown both resolve and fitness to fend off a break point in a long eighth game. And just as he had after his second match, he went straight back on court for an hour’s extra practice.

His win sets a highly attractive match with David Goffin, with whom Dimitrov played one of the matches of 2017 in the final of the World Tour Finals to win his biggest career title. What is more, Goffin beat Dimitrov here in the quarter-finals last year.

The nimble Belgian will certainly be fresh: He dropped only eight games in his first two matches, and got a walkover in this quarter-final when Tomas Berdych withdrew sick.