US Open 2017: Roger Federer leads band of single-handed backhand old boys into Round 3

Roger Federer survives another five-set match at the US Open, this time beating Mikhail Youzhny to reach round three 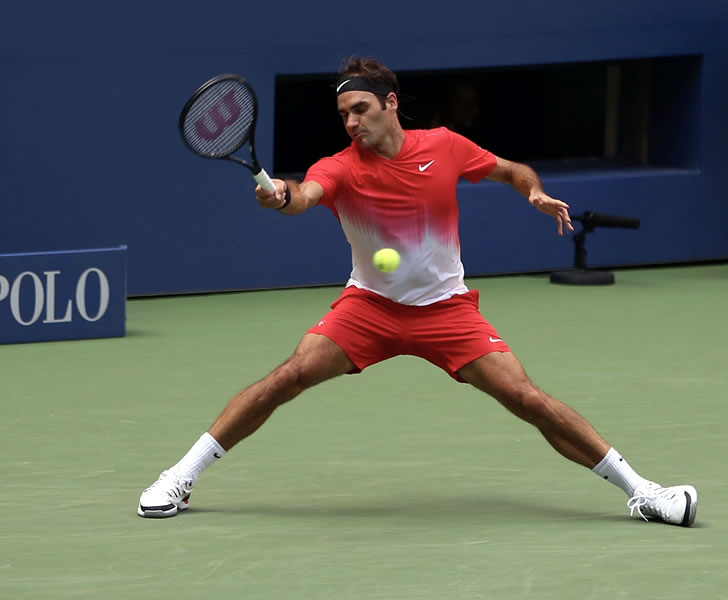 Roger Federer is through to the third round Photo: Marianne Bevis

It wasn’t in the reckoning of many experts, a late afternoon marathon for Roger Federer against a man he had beaten in all 16 previous matches over a span of 15 years.

Mikhail Youzhny, 35 years old, a fellow single-hander, a temperamental player with a crafty and deceptive game, had won 10 titles from 21 finals in his career, had reached the semis at the US Open twice, in 2006 and 2010, and reached a career-high ranking of No8 almost a decade ago.

He had had some close contests with 36-year-old Federer along the way, but had won few sets—largely at Wimbledon and Halle—yet as Federer said afterwards, these two go back to Junior days: in 1998 they played one another in doubles right here.

Nowadays, the PhD from Moscow has not enjoyed that kind of form, had not won a title since 2013, nor reached a final. This year he had played only 27 matches and won only nine, and was ranked 101. In contrast, Federer was thriving: After knee surgery last year, he returned at the top of his game to win the Australian Open, Wimbledon, Miami, Indian Wells and Halle, and made the final of Montreal too.

But there was the rub. The Swiss picked up a back problem in Canada that forced him to miss Cincinnati, so there was a question-mark over his truncated preparation. To compound matters, he faced one of the most exciting #NextGen players in his first round, Frances Tiafoe, and the rust was clear in the Swiss timing. It took him 2hrs 37mins and five sets to get through, with the clock almost touching midnight.

But Youzhny was dealt an even tougher deal. The rest of the schedule on Tuesday had been washed out, so the Russian played his first match Wednesday, and took over three hours in four sets to get through.

Now on the next day, he faced one of the biggest head-to-head deficits in tennis. And it looked entirely one-sided from the start. Federer broke in the second game, held to love, broke again, and held for a 5-0 lead. Youzhny finally got on the board, but not before Federer pulled him back from 40-0 to deuce and two break-point chances. The Russian survived, but the set was as good as over, 6-1, in 26 minutes.

Things were about to change drastically, however. Errors started to flow from Federer and he handed a quick break to the Russian. And so wayward was Federer’s tennis that, having got the break back, and broken again to take a 4-2 lead, he let it slip as he served for the set, and they went to a tie-break.

There, Youzhny burst into life, firing his backhand down the line to lead 6-3, and Federer netted a backhand on set point, 7-6(3).

The third set saw Federer’s form slip further: He looked tight and lacking in energy. Certainly his intensity levels seemed to flag, but whether through fatigue or residual back problems it was hard to tell. However, Youzhny was able to take advantage, and broke in fifth game. The Russian’s clever use of low slice and precise placement down the lines made Federer look even more tight, and he barely held onto his serve in the ninth game, fighting off two break points in a long, gutsy hold. It profited him little: Youzhny served out the set, with a love hold, 6-4.

Now the match was two hours old, and gradually those back-to-back match-days seemed to haunt the Russian. Federer got a break in the fourth game of the fourth, but once again failed to serve out the set at 5-3, even though his opponent had sought medical help at the change of ends. In the event, Youzhny’s problems buoyed Federer to another break for the set, 6-4, and they were all square.

Federer did seem to get a second wind, though the errors continued to flow, especially when forced to run wide. But a Youzhny fall when trying to chase down a lob did not help the Russian’s cause. He dug deep to stave off break points through a 10-minute game for 2-2, but the writing was on the wall. Federer did break in the sixth, and at the second time of asking, converted a match point for a 6-2 victory.

It had taken well over three hours, and set the kind of record that Federer will relish rather less than the multitude of others on the line in New York.

Having never played consecutive five-setters in his career as he began 2017, he had now done so twice. In winning the Australian Open, he beat Stan Wawrinka and Rafael Nadal in five-setters to win the title, but here he did so again, this time doing so in the first two matches.

So was it his back that had made this so difficult?

“No, it’s good. I’m better than the first round, so I’m happy. This match wasn’t about the back. This is more just a grind. I felt different, completely different.”

He went on to put his unusual start to the tournament into the broader context of the previous few weeks.

“Yes, I might feel more tired than I normally would going into a third round. My preparation hasn’t been good at all here. I knew I was going to maybe struggle early on… When the match comes around, you’re more susceptible to being a bit up and down.

“I still believe I’m going to pick up my game and become just more consistent because I’m not playing all that bad… With a bit of fatigue, that’s OK. I’ve done that 100s of times.”

He even managed to joke about it:|

“It wasn’t always like this. These five-set battles are quite a lot of fun, and I do feel quite warmed up now!”

This contest, then, saw Federer the survivor of the over-30s one-handers. But remarkably, he was not the only band-member to survive.

Leftie one-hander Feliciano Lopez, the No31 seed, beat fellow over-30 Spaniard Fernando Verdasco to set a meeting with, it so happens, Federer. And in another twist, Federer also has an unbeaten record, 12-0, over old rival Lopez.

And if that was not enough coincidence for one day in one tournament, the 33-year-old Philipp Kohlschreiber, with one of the most elegant and flexible single-handed backhands in the game, also sailed through—and if he beats John Millman, he will face either Federer or Lopez for a quarter-final place.

And should anyone think the one-hander is a thing of the past, take a look at the next highest ranked man left in this quarter. Dominic Thiem, No6 seed, is just 23 and possesses a backhand in the mould of Wawrinka’s—an open-chested pile driver of a shot.

The young Austrian is in a tough segment though. With No30 seed Adrian Mannarino up next, he will then face either former champion Juan Martin del Potro or No11 seed Roberto Bautista Agut.

Even the top half of the draw is not immune from the over-30 one-handed trend. There, serve and volley exponent, 35-year-old Nicolas Mahut won two five-setters, beating No20 seed Albert Ramos-Vinolas, to set a third-round against No12 seed Pablo Carreno Busta. And the winner could find the thrilling Canadian teenager Denis Shapovalov in the fourth round—a standard bearer among the #NextGen for the one-hander.