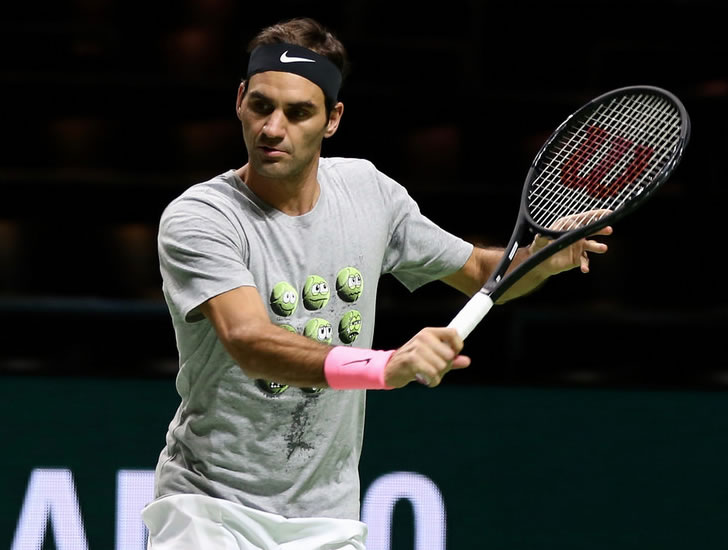 The first ATP 500 of the year in Rotterdam rarely fails to draw a starry line-up.

A quick look at some of the champions who have claimed the ABN AMRO World Tennis Championships, which begin this week, proves that: Arthur Ashe and Bjorn Borg back in the 1970s; Jimmy Connors and Stefan Edberg in the 80s; Boris Becker and Goran Ivanisevic in the 90s; and as for this millennium, try Lleyton Hewitt, Andy Murray, Juan Martin del Potro… Major champions all.

Fast forward to 2018, and the story is just as impressive: four top-10 players, and that not even counting former champions Tomas Berdych and Stan Wawrinka. And if that line-up is not enough to whet the appetite, there has been the late addition, via a wild-card, of two-time Rotterdam champion and 20-time Major champion Roger Federer—and with one big target in mind.

Following the Swiss star’s remarkable come-back from knee surgery last year to bag his first Majors since 2012—two of them—plus three Masters among a tally of seven titles, he rose to contest the No1 ranking at the end of the season. Rafael Nadal just held him off, but now… well now, after winning the Australian Open again, Federer has that No1 ranking within touching distance.

He trails Nadal, who does not play a tournament for another fortnight, by 155 points. A semi-final run will earn Federer 180 points—and along with them, the accolade of the oldest tennis No1, man or woman, since formal rankings began.

The gap between the dates that Federer held the No1 spot would be as wide as the gap between his winning Wimbledon in 2012 and the Australian Open last year—five and a half years.

At 36 years of age, and with 96 titles and almost 1,400 matches under his belt, it is some achievement. However, it is an achievement that could be thwarted by none other than his friend and compatriot, Wawrinka. He meets the fellow Swiss in the quarter-finals.

The issue of No1 was, not surprisingly, high on the agenda when Federer faced the media on opening Monday. And he was entirely up-front about his decision to go for it earlier—in Rotterdam—rather than later—in Dubai, where he has a home, a training base and seven titles. If he waited a fortnight, Nadal would be chasing his own points in Acapulco—though he has more points to defend than Federer does in Dubai. But the thinking seems to have been… why wait?

“I always said I would only look at the rankings once the Australian was over and I honestly wasn’t expecting to win Australia again. I thought that by not winning the World Tour Finals that the No1 was never going to happen again, or was going to be out of sight. And that’s how I played the Australian, not thinking about the rankings.

“But I always had the flexibility in February. I always thought I was going to be in the mountains in Switzerland, and depending on how the Open went… and I just thought I’d love to go play Rotterdam and give it a go there—and then always have the option to go to Dubai. I have great history with both events… And of course having the option to become the world No1 is highly motivating and exciting to say the least.”

But a theme of the last year or so has been his own surprise at how things have unfolded. He joked with Nadal at the Australian Open trophy ceremony last year that neither had expected to return so soon and so successfully from their respective injuries when they had met at the Rafa Nadal Academy the previous October, and here they were, champion and runner-up. They would go on to end 2017 as Nos1 and 2.

That Federer went on to win Wimbledon and then defend in Australia last month was just as big a surprise and thrill.

“If I would have won one Grand Slam I would be over the moon. I still believed I could do it, but hadn’t for a number of years. In 2016, Novak and Andy were in their absolute prime, fighting for world No1. Rafa was young enough to come back and be very, very strong. My chances were not maybe going to be that great.

“But [I thought] if I work hard, then maybe things will fall into place and maybe I get lucky along the way, and play some of my best tennis when it really matters. I always believed I could do it, but not three times, and not No1 or No2, so it’s been a great surprise, and an incredible journey.”

Federer, though, is not the only ‘veteran’ player in the Rotterdam draw. Indeed the top half comprises nine out of 16 men over 30. But what makes Federer’s challenge particularly interesting is the scattering of NextGen players among their older colleagues.

First up, though, is 30-year-old qualifier Ruben Bemelmans, who had expressed a hope to face Federer for the first time in his career, and got his wish.

Next is the winner between 34-year-old Philipp Kohlschreiber and 21-year-old Karen Khachanov. If Federer is still standing after these first two rounds, that is when he could meet 32-year-old Wawrinka in a battle to claim No1 and a semi-final place—assuming the younger Swiss makes it past 21-year-old Dutch wild card, Tallon Griekspoor. And Wawrinka is still working his way back to his prime fitness after his own knee surgery last August.

Wawrinka was feeling more upbeat after his time on the indoor courts of Sofia, where he won two decent matches before losing in the semis. He was, he told the press here, feeling better all the time, even if not back to 100 percent. And if he beats one young Dutchman, he will have another older one—Robin Haase meets Thiemo de Bakker for the privilege.

Incidentally, Federer, perhaps in a nod to a Major champion and the Tournament Director here, Richard Krajicek, has played three long practice session in the 24 hours he has been in the city, and against a different Dutch player in each: de Bakker, 20-year-old Tim van Rijthoven, and Haase.

So if Federer jumps all those hurdles, he will be the new No1. He won’t of course, stop there if he can help it: He would like his third title in Rotterdam, and to do that, there are more veteran-vs-youngster pairings to consider.

The 34-year-old Gilles Muller will play fast-rising 22-year-old Daniil Medvedev, and the highlight of the opening night schedule featured former No3, the 35-year-old David Ferrer against the No3 two months ago, 20-year-old Alexander Zverev.

The young German sounded full of confidence ahead of the tournament: Yes, he hoped Federer got to No1, but the Swis could do that before facing Zverev.

Ferrer had beaten him in their previous two meetings, but the Spaniard’s form and ranking had dipped since then, just as Zverev’s had risen. And it proved to be a mature hour and 25 minutes from the young star to take out Ferrer, 6-4, 6-3. He will next play either Joao Sousa or one more of the over-30s club, Andreas Seppi.