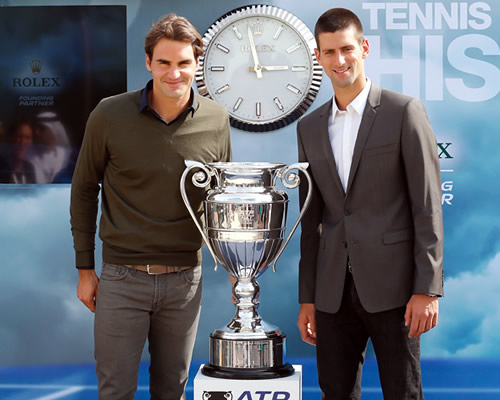 In the grander scheme of things, perhaps 40 years is not such a long time, but in the fast-moving kaleidoscope of modern sport it is an eternity, and in tennis especially, the journey from 1973 to today has seen a transformation.

Forty years back, the Association of Tennis Professionals had been representing male tennis players for barely a year. Optic yellow balls were a new phenomenon and three of the four Grand Slams were still played on grass.

Only four years before that, those professionals had been allowed for the first time to play in the Grand Slams alongside amateurs: the “open” era began in 1968.

Any attempt at rankings back then had been as good as impossible, with different men following different roads. But with an increasingly professional structure on the tour, the rankings we know today were established.

The first of the 25 to claim the official top spot was the charismatic Ilie Nastase, and he was also the first to claim the prestigious year-end No1 position. Since then only 16 others have ended the year as No1, among them some of the greatest names in their sport: Jimmy Connors, Bjorn Borg, John McEnroe, Pete Sampras, Rafael Nadal.

But to mark the launch of a year of celebrations along with the launch of the new ATP Heritage campaign, required two special members of that elite club.

Roger Federer has ended the year as No1 five times, has topped the rankings for more weeks than anyone else—302 weeks—and put together the longest unbroken streak, too: 237 weeks. He is also one of only five players to stay at No1 for an entire calendar year—and he did so three times.

Novak Djokovic has ended the last two years at the top of the pile and is currently 11th on the list for most weeks and longest streaks. And bearing in mind that he is more than 3,000 points ahead of the next man, Federer, he is set to rise in both those lists in the coming few weeks.

The two, as befits their standing in what has become one of the most glamorous and high-profile sports in the world, appeared against the suitably glamorous skyline of Dubai on the roof-garden of the newest building in the Dubai Duty Free complex, the Jumeirah Creekside hotel. All white marble, azure swimming pool and white leather lounge, the setting summed it up, and onto centre stage, as elegant as their surroundings, glided the two, Roger and Novak.

The ATP Heritage campaign aims to showcase the achievements of the world’s greatest players, as explained by Brad Drewett, ATP Executive Chairman and President.

“Much of the success of the ATP World Tour today is owed to the wonderful champions from our past…The rankings formed the core foundation of the ATP over four decades ago and have become a true marker through which excellence is measured and greatness defined in men’s professional tennis.”

Federer went on: “The ATP rankings have formed such a significant part of our sport over the years. I’ve always thought that being ranked World No1 is considered the ultimate achievement. That’s why for me, getting to No1 is something I’m very proud of. Having reached the pinnacle of the sport, alongside such a distinguished group of names, is amazing.”

Djokovic elaborated on the kudos of owning the top ranking:

“Finishing the 2012 season as No1 for a second time was definitely one of my greatest achievements so far. It’s a reward for all the physical and mental challenges that you face throughout the whole season, one of the toughest achievements in sport. To know that only 16 players have achieved it in 40 years says everything. It’s a great feeling to be part of that elite group of players and I’ll do everything I can to try to finish as No1 again in 2013.”

A number of promotional initiatives celebrating the 40-year anniversary are scheduled throughout the season, but the highlight will almost certainly be the gathering of former year-end No1 players in New York ahead of the US Open, coinciding with the day when ATP rankings began.

In an era that many regard as one of the finest in the men’s game, and with a growing global reach, the ATP initiative is a timely way to draw attention to its star protagonists, its drama and its athleticism. As the new ATP Heritage site says, success in this sport is a “brutal test of athleticism, technique, physical endurance and mental strength.”

There are few on the tour who would disagree, especially once the sapping globetrotting—adjusting to new time-zones, new courts, new weather conditions, week after week and at their own expense—is taken into account.

The two who stand atop the rankings today know all about all of it. And although their days of cattle-class flights, shared accommodation and scheduling on outside courts are long gone, the battle to stay ahead remains just as intense as ever—whatever colour they make the balls.