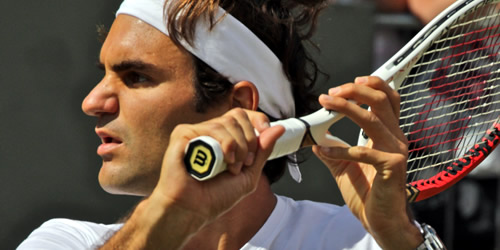 There was a certain inevitability about the line-up come the final day of the Cincinnati Masters. Roger Federer and Novak Djokovic were, after all, playing not just for the title but for the No1 ranking.

There was more. The top two men in the tennis hierarchy—with four of the season’s six Masters titles split between them and a Grand Slam trophy apiece—were playing both for the kudos of the No1 seeding at the US Open and for an edge over the other before what might become a sixth consecutive face-off at Flushing Meadows.

Even within that micro-rivalry, there was much at stake. Not since their first US Open meeting in 2007 had they met in the final: The subsequent four were all semis.

And superimposed on that story was the migration from three straight wins for Federer to two in a row for Djokovic. Mix in the nature of the Serb’s 2010 and 2011 wins—both minutes short of four hours, both in five sets—and the significance of the Cincinnati final, their fourth meeting in 2012, was clear.

The rankings and the US seedings were, as it happens, already a done deal. Federer had only to reach the final to maintain a slender 95-point advantage, and he did so with some scintillating tennis—not a set nor a serve lost and facing only three break points in the tournament.

But Djokovic had rarely looked challenged either, despite coming to Cincinnati on the back of the Toronto title. He, too, reached the final without dropping his serve or a set—though he had to fend off 10 break points.

So there was precious little to separate them: 62 matches played by Federer in 2012, 63 by Djokovic; 55 won by Federer, 54 by Djokovic. The result may come down, simply, to the surface.

Djokovic shines on the hard courts and he held the upper hand in their last four matches on these hot and precise courts. Even so, Cincinnati was fast—and so was Federer’s eagerness to reach the net. It was no accident that he had won this particular title four times before.

And when Djokovic opened serve, Federer showed the same eagerness to finish off at the net as he had all summer. A forehand and a drop-shot winner gave him an early opening, a double fault gave him two break chances, and he took the second.

Another forehand-and-drop-shot combo, an ace and a down-the-line winner from Federer ensured his 2-0 lead, but Djokovic looked lethargic, and was slow in warming to the contest. He mistimed his backhand and fired another couple of double faults to offer up a second break of serve. In the blink of an eye, with a love hold under his belt, Federer was 4-0 up.

The fifth game went to deuce and a fourth double fault created yet another break point. Federer whipped his forehand away for a winner and the game.

It was 5-0, and the Swiss feet skipped towards the net to pick off a backhand volley, did the same on the forehand in the next point and converted the second of two set points—with yet another forehand winner—to bagel Djokovic in 20 minutes. It was the first 6-0 set in the 83 they had played.

What to make of it? Was Djokovic ill or fatigued or injured? But there was no call to the doctor and no body language to suggest distress. He would not, certainly, choose to retire, for that was how his final here against Andy Murray had ended last year.

Sure enough, a livelier, more aggressive Djokovic emerged in the second set, playing with his characteristic grunt of effort on each strike of the ball, and he took his opening couple of service games.

It took Federer time to respond and, as the Serb serve rose from 50 to 65 percent, Federer’s dropped in equal measure. A more expressive Djokovic made a first foray to the net to try to take the initiative and began to score some points on the Federer serve, too.

They stood all square by mid-set, now playing rallies on even terms, with Djokovic finding the pace and depth to keep Federer at bay. Still the Swiss closed out his service game to level at 3-3 with the deftest of touch volleys, but he was more often on the back foot on the Djokovic serve.

It meant that, come the 10th game, Federer had to serve to stay in the set. Still he came to the net when his first delivery permitted, and he narrowly avoided a body-shot to hold, 5-5.

Djokovic pressed his advantage as the notorious cross-court forehand began to earn some winners. The crowd roared their encouragement, and he responded with a backhand winner.

Serving at 5-6, Federer produced his first double fault, and the Centre Court held its breath—but the error seemed to faze him not at all: An ace followed and he held comfortably. The set moved, therefore, to the tie-break that every man, woman and child in Cincinnati wanted—and the first rally was just the tennis they wanted, too.

Federer took the first point against serve with a blistering sequence of forehands and, once again, finished at the net. But Djokovic nailed his own forehand, then a backhand, that left Federer floundering at the net: The Serb passed him with his fourth straight point on the trot.

Djokovic’s fractional lead evaporated when he put a forehand long, only to be regained with a shanked Federer backhand.

Now the tennis was gripping, with both playing flat out—first Djokovic ahead, then, Federer. It was time for an ace from the Swiss, which staved off set point, and an unreturnable serve gave him a 6-5 lead, but again Djokovic struck back, and the two men changed ends, 6-6, 6-6.

The coup de grace came from an attacking serve with a forehand finish from Federer. It drew his first roar of the match, and he sealed the title with—what else—a forehand winner.

This marked a record fifth Cincinnati trophy for Federer, his 76th title over all, and a tour-leading sixth title this year. It also took him back to the top of the Masters titles leader-board with the currently-absent Rafael Nadal: They each have 21.

For Djokovic, it was his fourth final in Cincinnati and his fourth runner-up trophy, but with his title-winning run in Toronto, he still tops the US Open Series Challenge by a clear margin. That means he is in line for a very big payout in New York.

However, such considerations will take second place in his campaign to defend his US Open title. And he knows now, if he ever had any doubts, that Federer too has his eyes set firmly on claiming a sixth US title—four years after the last. And who would bet against it?