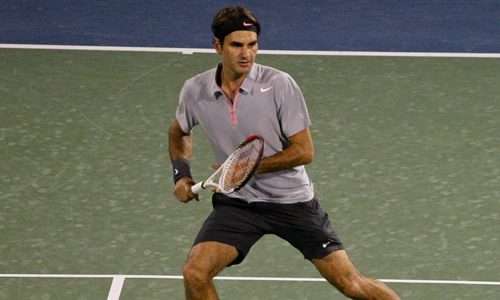 Both Roger Federer and Novak Djokovic are multiple winners in Dubai, and the prospect of a final between them—a repeat of the 2011 final—is an eagerly anticipated match-up. It would mark a staggering 30th in their careers.

But that final was a way down the line, and for now, they simply played the same court one after the other—both dressed in silver grey.

Federer was playing Spaniard Marcel Granollers, ranked 34, for the second time, and it was here, in the same round in 2011, that Federer won 6-3, 6-4 their first match. And the rerun took on a serious sense of dejà vu… another 6-3, 6-4 scoreline, again in Federer’s favour.

Unfortunately for Granollers, this was a different defending champion from the one who dropped a set to the unfancied man from Tunisia, Malek Jaziri in the first round. Then, Federer struggled for rhythm, struggled to read his opponent and served below par by his standards. This time, he clicked in straight away, taking the net from the attacking Spaniard and hitting off both wings to within inches of the lines.

Serving first, he broke in the sixth game and served out to love, 6-3, in 26 minutes.

In the second, Granollers held off the Swiss until the fifth game, though the Federer backhand—a sure sign of how confident and comfortable he is—was firing to perfection, scoring outright winners down the line and, several times, as cross-court passing shots. It was a remarkable rally at the net, at 30-30, that brought up the break point, Federer racing in to pick up a drop shot. The exchanged a sequence of volleys before Federer scooped a lob away.

It was a show-stopper of a point, and then Federer finished the job to break with a clinical backhand winner.

Now he looked even more laid back than usual, bouncing the ball off his chest or between legs while he waited between points. It almost cost him a break back in the sixth, and made him work for the hold in the eighth. Nevertheless his serve was performing well enough to get himself out of a hole. He failed to convert two break chances in the next but finally served out, via two aces, 6-4, in a tidy 71 minutes.

He was asked whether his extra sharpness was the result of improved playing conditions or a different opponent, and he agreed:

“He’s a top-50 player…it’s what I’m more used to probably; whereas the first opponent, it just threw me off a bit early on…

“I think I was sharper today. I had a more clear plan. I knew what I could and couldn’t do. So that automatically shaves out or carves out the things you might want to attempt, but then you know they’re not really working so let’s just not really bother with that today.

“I think I was just serving a little bit [better], I was a bit more confident overall. I don’t know how to explain… I knew what I wanted to do and I was able to do it, so I’m happy.”

But ahead of that ultimate final there are still major hurdles, the first a 21st meeting with fellow 31-year-old Nikolay Davydenko. The Russian reached the final in Doha earlier this year, a place where he scored one of his two wins over Federer in the 2010 semi-final.

But talking to him after losing his doubles match, he did not sound brimming with confidence: “I’ve never played in the night-time here before: I hope it will be slower, I can hit and control from the baseline. I hope it will be better.

“But my age is not 22 or 23. I try and run the same, but I cannot hold the same level like before, physically, concentration for a full match. Maybe for one hour, and once I lose and get tired, now it’s different. Now I don’t know if can come back. I really need to be good physically because I play the baseline, not serve and volley.”

Federer was more circumspect: “I know it’s a dangerous round next match. I know what he can do on his absolute best day because I was one of the guys that got crushed by him during that time. I expect him to come out and play that way.”

Next it was Djokovic’s turn to try and advance, and he also played a Spaniard, 24-year-old Roberto Bautista Agut. Ranked at 55, Agut had nevertheless reached his first tour final in Chennai at the start of the year and had risen a 100 places in the last year.

But despite the Spaniard’s obvious talent, the first set was even more of a trouncing than the one Federer imposed on Granollers: 21 minutes, 6-1. He dropped just one point on his first serve—winning 11 out of 12 points—and one on his second.

The second set began much the same, though the Djokovic serve level dropped into the 50s, as did his opponent’s. But even so, he had dropped only two points by the time he reached 4-1.

With Djokovic serving for the match at 5-3, though, the Spaniard staged a fight-back to break and then level at 5-5. It headed to an unexpected tie-break, and now Djokovic made no mistake, taking the set and match, 7 points to 4 in an hour and a half.

“I think I played really, really well and at a high level throughout most of the match. And then I had another poor game like yesterday towards the end, when I needed to close it out with a few match points. At 5-4 he served well, he fought his way through, and I have to give them credit for that.”

He will next play No19 seed Andreas Seppi, hoping to move one step closer to that final—and possibly Federer. On today’s evidence, both look as sharp as the silver grey they have chosen to wear.