Roger Federer announces that he will play in Monte Carlo, Madrid, Rome and Istanbul in the build-up to the 2015 French Open 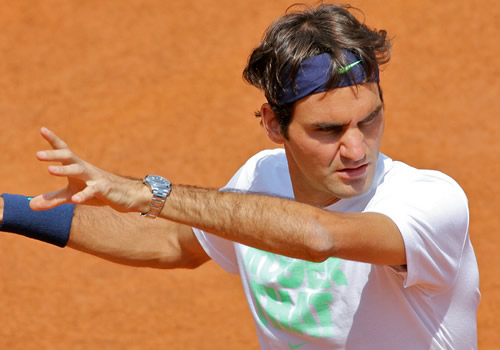 Roger Federer has revealed his schedule for the clay season Photo: Marianne Bevis

Roger Federer’s fans have waited patiently for news of his 2015 schedule.

For after an intense—and highly rewarding—close to 2014, he planned to ring the changes come 2015. And little wonder.

A dip at the end of the clay season, after the birth of his second set of twins, was followed by the kind of winning spree that had taken Federer back to the Wimbledon title and No1 ranking in 2012.

Come 2014’s grass, he won Halle and reached the Wimbledon final. In the US Open Series, it was a final finish in Toronto, the title in Cincinnati and the semis of the Open itself.

He shot across to Shanghai to claim his first Masters there, and flew back to reclaim Basel, reach the quarters in Paris, and the final of the World Tour Finals—beaten in the end by back injury.

Along the way, he slotted in Davis Cup duties, too, and ended the year having played and won more matches than anyone else on the tour, and just shy of the No1 ranking.

Not content with ending 2014 on the crest of a wave with Swiss Davis Cup glory, and beginning 2015 with a bang and the Brisbane title, he packed more into his off-season than your average tennis pro.

A first trip to Delhi to take part in the IPTL was sandwiched between journeys home to pick a national sports award and then to play a ‘Match for Africa’. He was then one of the first to head Down Under for the new season, dropping off his family in Brisbane before heading on to Sydney to help launch the new format ‘Fast4 Tennis’ with old mate Lleyton Hewitt.

All reason enough to explain why, as Jon Wertheim put it in Sports Illustrated after Federer’s surprise exit in the third round of the Australian Open: “So light on his feet in 2014, Federer looked as though he was encumbered by ankle weights…”

Naturally, Federer’s intense schedule ahead of Melbourne became the subject of much debate, to which he responded: “Clearly I’ll have a look at it, but I don’t think I did anything wrong honestly. I wanted to go to India. I wanted to go back to Switzerland for Christmas. I practised as hard as I possibly could. Can’t do more than that.

“Sure, the year ended late, but one week later than normal. At the end of the day, I’m confident that what I did was the right thing.”

It also gave him time to think how the rest of 2015 might pan out. Until this week, only the Dubai Duty Free, where he is defending champion and has his training base, was confirmed.

But on the day that Swiss colleague Wawrinka announced he would not play the opening tie in this year’s Davis Cup, Federer also released a schedule in which the Davis Cup was absent.

Wawrinka revealed that he and captain Severin Luthi had talked with Federer since before the Australian Open, going on: “To win it last year with Roger with Serverin, with the rest of the team, was an amazing experience, but I need to take some decisions for my career also. I’m not 20 any more, I’m 29.

“It’s been so many years since I’ve been on the tour. I had a crazy year last year, 2014, the schedule was tough, and I know it’s a sad decision but that’s the decision I took for the first time.”

The words could just as easily have come from Federer’s lips: He, after all, is 33 and has notched up 15 years of Davis Cup involvement. Indeed Federer has played more rubbers than any other active player except Lleyton Hewitt.

So Federer is clearly looking at a different rhythm and shape to his 2015 calendar, one that packs in his fullest clay swing in many a year.

After Dubai, he returns to the happy hunting ground of Indian Wells, a tournament he has won four times and where he reached the final last year. But aside from a stop-over in New York for World Tennis Day, that completes his North American schedule: No Miami, where he won the last of two titles in 2006.

Instead, he goes all out through the busiest Masters season of the year, beginning with one he has yet to win, Monte Carlo, taking in Madrid, and ending with another title he has yet to win, Rome. It’s a demanding run-in to the French Open, and now made all the more so but his surprise inclusion of the Istanbul Open, a 250 tournament making its debut on the calendar this year.

He broke the news in a video announcement: “I’m very excited to be coming to Istanbul for the first time in my life. It’s a place I’ve always wanted to visit and a very exciting city from what I’ve heard. I hope you can come see me play there.”

It is a huge coup for an event so recently confirmed on the circuit, though there is no doubting its ambition. With a huge sponsor in the shape of TEB BNP Paribas and a stunning venue—the Koza World of Sports facility claims to be the largest tennis academy in the world and boasts a Centre Court retractable roof—there is no more high-profile way to launch itself than with Federer as its headliner.

And in practice, what it means for the Swiss is four weeks of tennis in the space of five weeks, with then just a week’s break before the start of the French Open.

There are personal ambitions embedded in this schedule, of course. Four times he has reached the final in Monte Carlo, losing three times to Rafael Nadal and last year to Wawrinka. Three times he has been in the Rome final, twice falling to Nadal. Judging from his delight at claiming his first Shanghai title last year, he would very much like to add at least one of these to his list.

But maybe there is one more thing going on here—even if it is an idea buried deep at the back of his mind.

Federer came within a handful of match-wins of overtaking Djokovic at No1 at the end of 2014. And although he had not predicted it, he clearly liked it. At the World Tour Finals, he said of reaching No1: “For me personally, it doesn’t really matter if it happened at the end of the year or any other week during the year, as long as you could get back to world No1 for one more time. I think that would be very special because I’ve been there and I know how much it would mean. Because winning a tournament is a one week or a two week thing, but getting back to world No1 is an entirely different animal.”

It would take more than just a string of wins from Federer to achieve such a goal: For example, how likely is it that Djokovic will fail to defend his titles and big points in Indian Wells, Miami, Rome and then Wimbledon? And the world No1 has room to pick up points in Madrid, which he missed with injury last year, and he has made no secret of targeting the Roland Garros title.

And when it comes to clay, Nadal is always going to be a problem for both Federer and Djokovic, just as the likes of Tomas Berdych, Milos Raonic and Andy Murray will threaten on hard courts.

So it won’t be easy for Federer… any more than fighting back from No8 to No2 was last year. But as the man said, it would be very special.