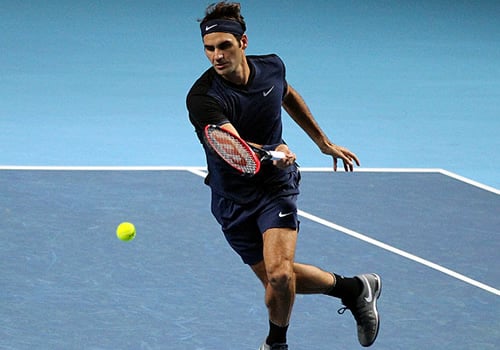 Hot on the heels of one young, admiring tennis player, the 24-year-old David Goffin, Roger Federer would face another in the shape of 23-year-old American Jack Sock.

They had already met, just the once, in the fourth round of Indian Wells this year, with Sock barely into the top 50, though that in itself was impressive, for he had missed the previous four months to undergo surgery. And a year before, he was barely in the top 100.

There was no doubting his potential, though. He won the US Open Junior title in 2010 and, with Canadian Vasek Pospisil, soared to the Wimbledon doubles title in 2014.

But March this year was the start of his fresh assault on the tennis rankings, and by the time he played in Basel, he had won his first title in Houston, reached the Stockholm final last week, and climbed to No27 in the rankings.

After beating three fellow American’s in a row, he talked about the challenge ahead: “Played Roger in Indian Wells this year for the first time. Got routined pretty good, but it was the first time I played him. Seen him play a ton, but never been on the other side. So I’ll have a little bit of a better idea on what I need to do to try and be successful, but obviously he’s the best of all time.

“I think though, compared to now, I’ve rounded out my game better, and am a lot more confident with what I’m doing out there. But it’s Roger, so it will take my A+ game, and some more, to try and win.”

He was not wrong. Despite his 34 years, Federer was in great form of his own. The world No3 had this year accumulated five titles, plus two Masters finals and two Grand Slam finals, 56 match-wins, and that was without taking into account his 59 wins in Basel.

If Federer had looked vulnerable thus far, it was in an occasional loss of concentration and serving level to drop the second set in both his previous matches, but could Sock really prevent win No60 in Basel?

Well after a tight opening service game, it looked like plain sailing for the six-time champion. A love hold for 2-1 was followed by a break to 15. Then Sock attempted a really aggressive comeback, and it almost worked as Federer sprayed a forehand wide for break point.

The Swiss played boldly, almost recklessly, to save it with a serve and volley on his second serve, and then he serve-and-double-volleyed to hold.

Sock’s serving was working well, now, and a love hold by the American was followed by another hold with a 136mph ace, but Federer was on a roll, and held to love himself with three serve-and-volley winners in a single game. With just 28 minutes on the clock, he was up a set, 6-3, and had won 20 out of 22 first serve points.

It was a similar pattern in the second set, though this time Sock opened with a strong hold. However, he could not resist a plethora of deuces and two break points in the third game: He fired a final forehand wide.

Federer rubbed salt into the wound with a love hold for 3-1, and now the crowd was in overdrive with excitement. It was a challenge for the American to keep his focus, and sure enough, he gave up another break.

But with Federer serving for the set, 5-2, he had one of those losses of concentration, and Sock, with nothing to lose, threw in three blistering return of serve winners to break back. Fortunately for the home supporters, Federer quickly regrouped, and served his way into his 12th Basel final, 6-4.

It had taken him just 63 minutes, cost him only five points out of 39 first serves, produced 19 winners and he won all 18 of his points at the net. But he was particularly pleased to have kept this match short: “Feel like job well done getting through to another final here.

“Looking at the draw in the beginning makes you wonder if this year you’re not gonna make it, drop out early. I’m happy I fought through two tough ones with Kohlschreiber and Goffin, then today I was in control. So I feel like tomorrow I’ve got a good shot in the finals.”

That final is the blockbuster that tennis fans around the world have been waiting some time to replay. Federer meets Rafael Nadal for the 34th time, their first time in almost two years, and their first ever in Basel.

Now, of course, it was the obvious question: How much had he seen of Nadal lately, during the Spaniard’s fight back to form?

“Not enough, to be quite honest. I saw most of his match today. Nothing really of the other matches. I haven’t seen him play enough, but I know how he plays so there’s not really much reason for me to watch too much.

“I think against me he’s got a clear game plan, he always plays the same way—he’s pretty committed to that game plan. I thought he played pretty well today, actually: Rumours I was hearing were like he can’t play tennis anymore at the beginning of the week! So I’m expecting him to come out and play his best match yet in the finals.”

There is no denying that the match-up with Nadal has long been a difficult one for Federer: the Spaniard has a 23-10 advantage, including the last five matches. Federer’s most recent success was on the fast courts of Indian Wells in 2012.

And Federer will also be mindful that he has thrived on indoor courts more than his old rival, but Federer knew he needed to start well and quickly:

“The start of a three-set match is going to be crucial, but he’s doing a very nice job of fighting back in matches this week. Being down a break, no problem, he always fights back, and once he gets one break he tends to get two. That’s something I know he can do, and keeps him in the match, cos he’s mentally very strong and extremely experienced.”

For Nadal, the boost to his confidence of a win here, on ‘Federer’s court’, indoors, would be invaluable as the elite of the tour head to the only indoor Masters of the year in Paris and then the World Tour Finals.

The same, of course, is true for Federer, who would dearly love another shot at the London trophy after back problems forced him to withdraw from the final last year.

This 34th meeting will be well worth the wait.