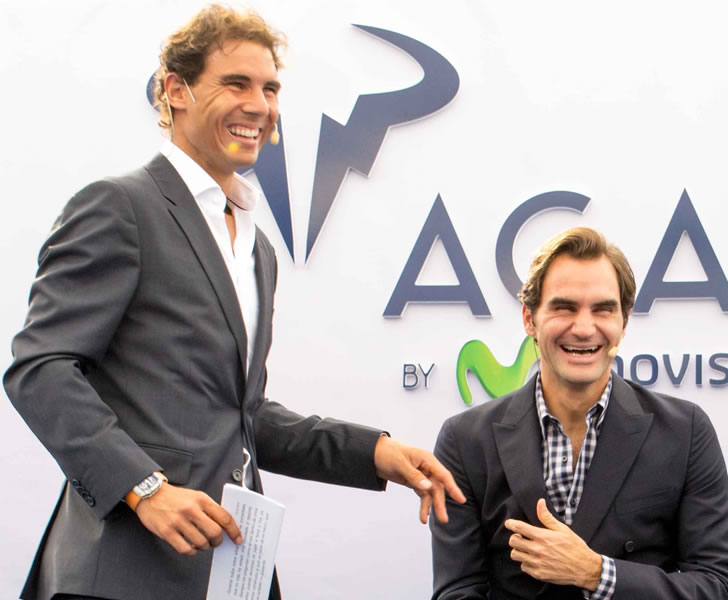 A year ago today, Roger Federer paid a special visit to the home of his most famous rival, Rafael Nadal, more than 12 years after they first locked horns in Miami in 2004.

Back then, the teenage Nadal, all biceps, pirate pants, and long sweat-drenched locks, announced his arrival with a straight-sets victory over then No1 Federer.

And he would go on win six of their first seven matches: Federer halted him on the grass of Wimbledon 2006.

But by the time the two shook hands last October on Nadal’s home island of Mallorca, the then 30-year-old Spaniard had notched up a 23-11 head-to-head over the 35-year-old Swiss. Yet this rivalry continued to capture the imagination as each battled through the years for the No1 ranking, and each set off the contrasting styles, looks and personalities of the other.

And with the seasons, it became clear that they did not just respect one another but liked one another. Their rivalry began to nurture a mellow friendship—and just how strong a friendship became abundantly clear on this day one year ago.

It was the inauguration of the Rafa Nadal Academy by Movistar in his home town of Manacor, after both he and Federer had missed great swathes of the season with injury. Indeed the Swiss had played just five tournaments since knee surgery in February, and closed his season after Wimbledon.

Nadal would play only five events after his aborted French Open, and slam the door on 2016 after his first-round loss in Shanghai—a week before this important event. Important, because it represented a long project in the making, an academy for young people close to the Spaniard’s beloved home. And Federer clearly understood that importance.

The Swiss explained: “Of course we had some battles on the court, but at the end of the day, when we walked off the court, the respect was also there, a special kind of friendship that has been created over the years, and that is why I’m here today to show the ultimate respect.

The ceremony closed with a touching gesture from Spaniard to Swiss: A poster of all their great battles, though it was the words written by Nadal at the bottom that echoed their special relationship. It read:

“Thank you for your support at the official opening of my Academy. Today is an unforgettable day for me, my family, and my team. You cannot imagine how special it is to have you here with us.

“Roger, this reflects all the moments we had on court. Looking back at them I see all the great memories we shared in our careers… To be continued…”

Surely neither man, though, could have predicted how prescient those last three words would be. Few could.

Come Australia 2017, Nadal and Federer were ranked No9 and No17 respectively, but then the reinvigorated champions took the season by the throat to share all four Majors and a clutch of Masters and 500s. By the time of the Academy’s first anniversary, with the men now at Nos 1 and 2 in the world, they had added four more showdowns to their timeline.

What is more, Federer had come out fighting. Nadal had indeed made him a better player, with a bigger backhand, a more dominant serve, and a bold offensive strategy to defuse the strengths of his rival like never before. The Swiss won all four of their 2017 matches. 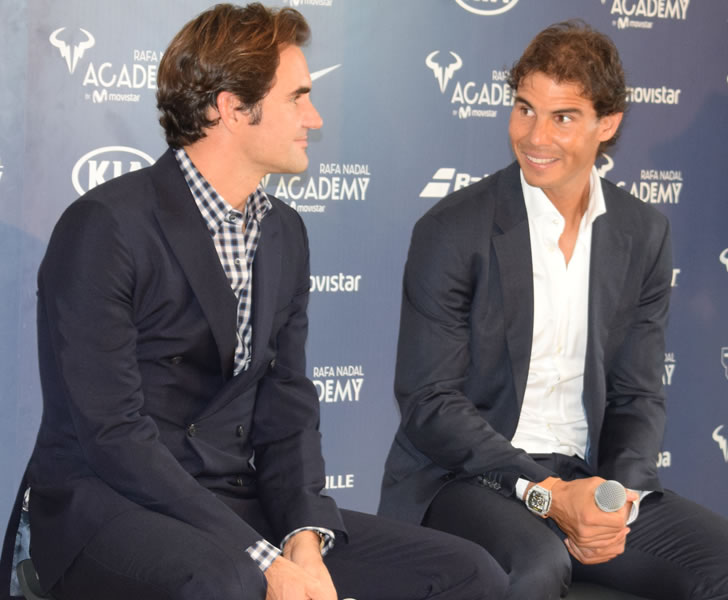 Along the way, the friendship blossomed still further, kindled by a new understanding of what it took to overcome adversity—plus the Laver Cup. Never before had these two played on the same team, and never before on the same side of the net. In their mutual admiration of Rod Laver, they did both in Prague—and all at once they seemed to see just how much they had in common.

It became the talk of Twitter, the “Fedal” friendship, and was writ large again as they competed for the Shanghai Masters title. In his victory speech, Federer summed it up:

“It is a wonderful moment in my career to be back here playing so well against my good friend and rival Rafa… Almost a year ago to this day, we were in Mallorca to open Rafa’s academy. We didn’t think maybe we were going to have the year we did—I definitely didn’t—so it’s nice to share this court with you today.”

And on 19 October, that anniversary brought them into alignment once more. First it was Federer, in a video on Facebook.

“I just wanted to congratulate the Rafa Nadal Academy on their one-year anniversary, and all their team and family. I know they worked incredibly hard to make this possible, and you’ve now got one of the premier academies around the world.

“I’m happy I was there in person with Rafa himself to open the Academy and I had a great time. I don’t think Rafa or myself, we thought we were going to have the year we had and maybe it all started at the Academy! So I hope I get an invitation soon again so I can go and get inspired with all the juniors and seeing the Academy up and running. I would love to come back, so I am waiting for the invitation!”

Within the hour, Nadal had replied in his own video:

“Hey Roger, thank you very much for your message. It has been a great year for the Academy and you helped in the commemoration day which was so important.

“I know I can’t thank you enough, but you know how important it was for everybody here. For my team, for my family, for all the people who were working incredibly hard every day here—and for me personally, as you know, I told you in person.

“You know the invitation is always open for you This is your house: your kids, your family, everybody is very welcome here. Only thing that cannot happen again is, after coming here you play that well again. If that were to happen, I don’t invite you!”

He beamed his famous beam: “Just a joke. See you soon!”

Their rivalry is as intense as ever: Federer could overtake Nadal to the end-of-year No1 ranking with a winning streak through Basel, Paris and the World Tour Finals, though as he said in Shanghai, that is a very long shot—and depends on Nadal winning few matches.

Come what may, though, they will revisit that friendship in London in November, and may—just as Andy Murray and Novak Djokovic did last year—contest the No1 ranking in the final. The result could have an impact on tennis’s record books, but it will take nothing away from this most admirable of rivalries.