For Roger Federer, the fanfare from ‘special’ Basel still rings out 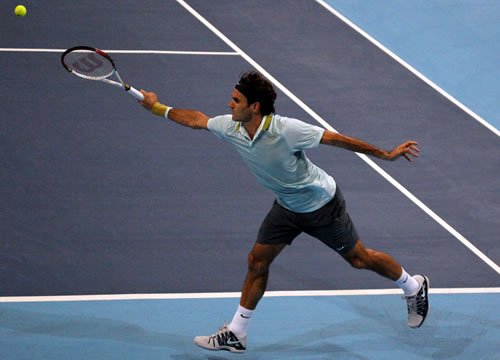 He does, of course, know the small and perfectly-formed city of Basel like the back of his hand. Roger Federer was born just down the road from this cosmopolitan corner of Switzerland, and it takes only a short time here to see how it has influenced the man himself.

For this proudly Swiss community extends its borders into Germany and France: Indeed from the top of its twin-spired munster, high over a loop in the Rhine, it is possible see both. So the people of this outward facing place turn their hand not just to Swiss German but to French, English and a smattering of Italian, too.

Federer, a gregarious individual, talks often of the pleasure he takes in travelling to new places and exploring new cultures, and early on set the template that he still follows, holding press conferences in three languages.

Life has changed beyond recognition since the boy from Basel played the main draw here as an 18-year-old. He lost to Andre Agassi in the first round, and the following year to Tim Henman in the quarters. By the turn of the millennium, he had reached a Basel final, but it would be 2006 before he lifted his coveted home trophy, already the holder of nine Grand Slams and on his way to a third Masters Cup.

Now, when he is not trotting the globe, he splits his time between Switzerland and Dubai, is married to the woman he met a year after that first Basel, and is the father of twin four-year-olds.

Now he owns five Basel titles, has reached the final of four further occasions, and has embarked on his 14th tournament here. Yet asked about the pressure of performing time and again before his devoted Basel fans, he was very clear:

“Well look, clearly I want to do well here. This tournament is probably the tournament I’ve played in most next to the Slams, so it all kind of started here for me. So this one obviously is very special for me.

“I have to be careful not to put too much pressure on myself, but I think ever since I was able to win the tournament here…I think in 2006 maybe for the first time?… that pressure’s kind of gone, because I was able to win Basel after losing twice in the finals.

“And the initial dream was just to be part of the main draw here, and then the next dream was hopefully winning a few rounds, and maybe one day winning the tournament when I saw that I was entering into the top 50, top 30, and so forth: and eventually I was able to reach that dream.

“Now, it’s about enjoying it, and not bringing myself under so much pressure that it’s actually not enjoyable anymore.”

Basel remains a place of family and friends for him, too:

“When you come back to where you grew up, you feel immediately at home. I know the way, whether by bike, by tram, bus or car.

“I have friends and family who I can see and catch up with, spend time with my parents, sister and her kids. It’s a nice week in that regard.”

And he put his intimate relationship with his home city thus:

“They are very different, in many ways, than the rest of the world, just because I know so many people. And many people know me from way back when. Basel’s not a huge city, so we kind of know each other. It’s very familiar, and it’s very unique in so many ways—I try to enjoy it as much as I can.”

But of course the business of tennis will, this week, take centre stage for much of his residency in Basel. And it is not just the title at stake.

Qualification for the ATPWorld Tour Finals is still in the balance, and he needs good results both here and in Paris next week if he is to reach his 12th consecutive tour finale.

And he was, as he has so often before, the opening feature match at the Swiss Indoors, and played the No62 ranked Frenchman, Adrian Mannarino.

Federer had beaten his opponent in all three previous matches, and with relative ease, but the nimble-footed Mannarino has a tricky game: left-handed, flat hitting, and with some crisp serving and ground-strokes.

He certainly threatened to make a good fight of it in the opening set. After Federer leapt to quick 2-0 lead—his opening shot a cracking forehand return-of-serve winner—Mannarino returned in kind, and jumped all over a couple of second serves from the Swiss. It was enough to pressure Federer into a double fault for the break back.

The sharp, uncomplicated hitting of the Frenchman kept him in touch for a while and he even drew more errors from Federer to save two break points in the seventh game. But another Swiss return-of-serve winner broke at the third attempt and he served out the set, 6-4.

Had Federer converted more of his break point chances, he may have drawn a 6-0 line under the set. As it was, he missed one in first game, three more in the second—on each occasion growling at his errors in disgust—but at last converted in the fifth game. Mannarino’s resistance folded, Federer broke again, and he served out the match, 6-2.

In truth, it was a mixed affair. A scattering of outstanding net-and-lob chases alternated with some poor approach shots—and the first serve percentage from both men languished at around 50 per cent.

That said, this was only Federer’s third match since the first week of the US Open, and his first indoors since the middle of February. Reason enough, then, for his positive assessment:

“Pretty good performance for a first round. It’s important that I don’t expect myself to play my absolute very best in my first round. Of course it happens sometimes if the match-up was right and the day went the right way. But that was a traditional first round match, where I had some good spells and some that were tougher.

“I fought through, stayed positive, kept playing aggressive as well, the way I would like to play for the week. It was pretty consistent overall, except a short hiccup when I got broken. But I maybe missed too many first serves, he took some good chances off my second serve, and stayed aggressive…Other than that, I was pretty solid on my own serve, and created many opportunities on the return.”

His English done, and then his German and French, plus a bit of radio and TV, he ambled through the Media Centre, greeting those old familiar Swiss faces with a handshake, before some photos and autographs with his waiting fans.

This may have been only a first-round match in a 500 tournament on a Monday evening in the Basel suburbs, but the huge St Jakobshalle was packed to bursting to cheer on the home man. It has been thus for a decade—and will continue to be so for as long as Federer chooses to return to his “special one”.