Roger Federer: 17 years after his first Basel, ‘it feels like it was yesterday’

Roger Federer is gearing up for the Swiss Indoors, 17 years after his first appearance in the main draw in Basel 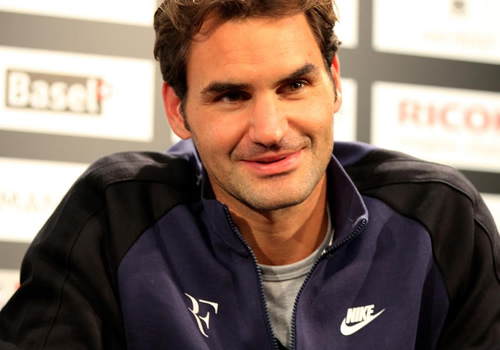 Roger Federer spoke to the media in Basel on Sunday Photo: Marianne Bevis

Roger Federer, the boy from Basel, is back—17 years after his first appearance in the main draw while a still-green teenager.

Now, the evergreen 34-year-old Swiss, still close to the top of his game at No3 in the world, is about to embark on his 16th campaign at the place he calls home.

Six times he has won here, though it took him a few years to claim his first Basel title: He was, he said ahead of the tournament on Sunday, “always very nervous on court because I wanted to do well here.”

But come 2006, he did win, and he has reached at least the final every year since. That’s a 56-9 winning record. And should he win again, it will mark the fourth tournament at which he has won at least seven titles, equalling Dubai, Wimbledon and Cincinnati. One more, and he matches Halle’s eight—and hearing him talk in Basel today of longevity, that is not simply wishful thinking.

For while life may have changed beyond recognition since Federer lost his first match here in the first round to Andre Agassi in 1998, he seems to have changed remarkably little.

This year, as in every season since he reached his first final here in 2000, he exudes a real zest for competition. After a tough 2013, caused largely by back problems, during which he picked up just one title, he returned to the fray in 2014 with new mentor Stefan Edberg, a new racket and new attack in his game. This time last year, he was within touching distance of reclaiming the No1 from a low of No8, he reached the final of the World Tour Finals, and helped Switzerland win its first Davis Cup.

This year has continued the attack, and he arrives in Basel with five titles, plus final runs at Wimbledon and the US Open—and remains the only player this season to beat the mighty Serb Novak Djokovic twice, in claiming the Dubai and Cincinnati Masters titles.

But as usual at this popular tournament in this cosmopolitan corner of Switzerland, the draw is challenging. It may have lost fellow top-10 players Kei Nishikori and Milos Raonic to injury, but all eight seeds are ranked within the top 16, with fellow Swiss and world No4 Stan Wawrinka competing for the honours at his home tournament.

I still enjoy it as much as ever, but it’s true that the routines now are easier

The victor will have to play five matches, too, and while Federer’s nemesis Rafael Nadal has fallen into Wawrinka’s half, the top seed’s draw is still challenge. He opens against No61-ranked Mikhail Kukushkin, could face friend and this week’s Moscow semi-finalist Philipp Kohlschreiber in Round 2, and last year’s Basel finalist David Goffin in the quarters.

The semis are likely to bring a huge server knocking at the door of qualification for the World Tour Finals, either Kevin Anderson or John Isner. Add into the mix two more semi-finalists this week, Ernests Gulbis and Jack Sock, plus one of the fastest improvers on the tour—and shock winner over Nadal here last year—Borna Coric, and there is plenty to test the fitness and determination of the six-time champion.

How then, I asked him, did he continue to manage the huge hopes and expectations of his home crowd?

“It’s clearly changed, because also expectations are different. Before, just winning, say, maybe five or six games in the first round match was going to be a good result. Then maybe if I won a set it would be great, if I won a round it would be great. Next thing you know, you’re [saying] defending titles would be nice.

“So that’s changed a lot in the approach. And with experience, I am less nervous and anxious, I would say. I still enjoy it as much as ever, but it’s true that the routines now are easier… I know how to handle ticketing, how to handle having friends here and family. In the beginning there was so much going on, it was crazy but in a good way.”

Has the Basel scene changed now that there are four children in the mix?

“That didn’t change anything. It’s changed my life but not my approach towards the tournament here in Basel to be honest. I still have tons of family and friends here and that’s the interesting part, and knowing my way around, knowing I grew up here—played soccer just behind here—came on my bike when I was a ball boy. [Smiling] Feels like it was yesterday. That’s what makes this tournament so special.”

But what shines out as strongly as ever is that zest. I wanted to know how he and a number of other over-30s have maintained, and in some case, improved with age. He quickly warmed to the subject.

“I don’t know exactly what the reason is. [Perhaps physically stronger], or there’s also a lack of pressure from the previous generation. There are some good players [among the 25-year-olds], but there wasn’t like a wave of 20 guys coming through. So that maybe allowed that generation of 30-year-olds to figure their game out, and to sort of reinvent themselves a bit more, and I think that has made it quite interesting for them.

“It was also a good generation, a generation in the transition of becoming really professional, understanding that we needed to change our life around. It’s become more physical. I mean ever since me and Wayne Ferreira started the trend of playing all the Slams throughout the season, everyone feels it’s a normal thing to do now.

“So it was a different approach to tennis, and the end of the season was always such a grind, you felt tired thinking about the end of the season. So a lot of players would check out. I don’t feel that’s the case any more. A lot has happened, but it will be interesting to see the next two or three years with a good wave of players coming through, and that will be a test for our generation.”

For now, though, it is not a new younger generation that dominates. The man who is pushing the boundaries, Djokovic, is 28 with 12 years on the tour under his belt—and the same is true of Andy Murray. Look at the top 12 in the Race to London, and there are just four more under 30s, with three of them, including Nadal, aged 29.

Many may have anticipated that the oldest man among them, Federer, would have packed his bags on a record-busting career, but many thought the same as headed towards his fourth Olympics in 2012. Now he’s planning his fifth in Rio.

A trail-blazer for well over a decade, it looks like Federer is not done with blazing a few more trails yet.