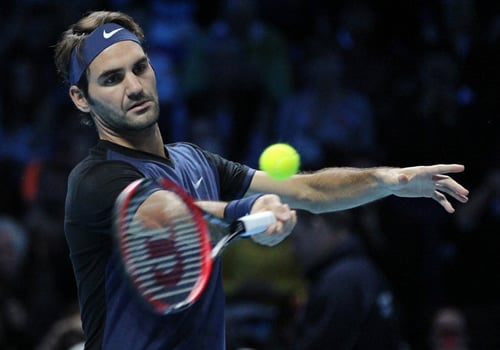 Roger Federer is through to the semi-finals in London Photo: Marianne Bevis

It was a curious press conference that followed a curious match for Roger Federer.

In a tournament where seven of the eight previous matches had been resolved in straight sets, without even a tie-break in sight, here was the highest quality, most intensely contested match of the tournament that could just as easily have gone Kei Nishikori’s way. What made it curious was that Federer did not even need to win the match: He was assured of a semi-final place after two wins, and as good as assured of the top spot in his pool, too.

Yet battle he did, the champion’s mentality on show for all to see. Did it not, he was asked, make a difference that the result of the match mattered little in the overall scheme of this tournament?

Federer’s recall of matches past has become legendary: He is a student not just of his own tennis history but of the wider story of his sport and its key players. So not for the first time, he used a match from the past to illustrate his answer. Of course, when it comes to Federer, that past goes back rather further than for most players’: He is here at the ATP World Tour Finals for the 14th consecutive year, but he recalled his first as though it was yesterday.

“The good thing is I’ve been in this position before so I know how to handle it. I always mention the first time it happened to me in 2002, was the first time I ever qualified. I was also qualified after two matches [he would go on, as this year, to win all three RR matches]. Agassi had pulled out. Johansson came in. I was totally out of sorts. I was like, ‘Oh God, there’s so many points on the line, I don’t want to lose.’

“Anyway, I ended up playing alright. But mentally I was just spinning. So honestly, 13 years later—or whatever it is now—I’m a bit more relaxed now about these matches. It’s just another match [but] a really important one for me to move on with a good feeling. Again, there’re points on the line and prestige, wanting to beat Kei, winning at the O2. Yeah, I want to do well here.”

That year, 2002, he would meet one of his first big rivals, Lleyton Hewitt, in the semis and the fellow 21-year-old scored what would become seven wins in their first nine matches. Now Hewitt is on his retirement tour while Federer remains in contention for a seventh end-of-year title.

Hewitt’s farewell has been an opportunity for Federer again to reminisce.

“One of my biggest rivals, no doubt about it. We played the first time in Zurich U-16s, so go way back with him. Darren Cahill was in the chair for Lleyton and Peter Carter was there: they were best friends. We played doubles together at Wimbledon. I had an extremely hard time beating him in the beginning. Eventually I turned it around and played some of my best matches against him, like the US Open finals 2004.” 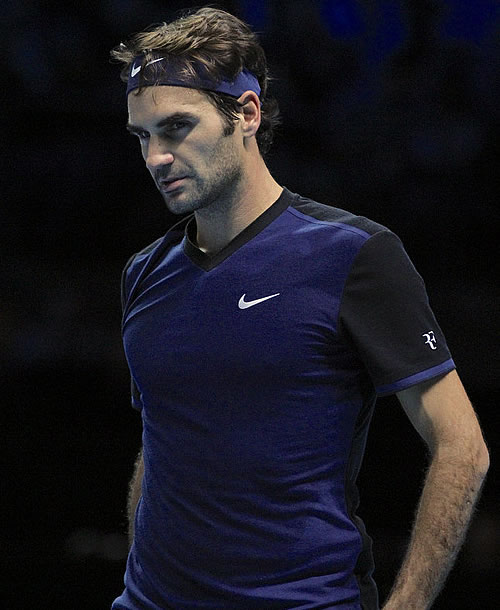 Roger Federer in action at the O2 ArenaPhoto: Marianne Bevis

Indeed, 2004 saw Federer beat him at the Australian Open, Wimbledon, the US Open and the Masters Cup, and Hewitt would only beat him again twice more, in Halle 2010 and Brisbane last year.

Federer recalled: “I learned a lot from him, from his fighting spirit, his work ethic, how it’s done at a young age—something I couldn’t quite comprehend, how he’s so good so early. He showed us the way. That’s why his legacy’s incredible, to have been so dominant and consistent at an early age… it was unbelievable. He changed the game in some ways for ever, because I felt like even the best players like Sampras, [Lleyton] would say ‘Come to the net and I’ll pass you, lob you…’ So I have great respect for Lleyton and sad to see him go.”

However, when it came to perhaps Federer’s most famous rival, Rafael Nadal, he had clearly taken his eye off the ball. Like Federer himself, Nadal had already topped his group after two wins, but Federer seemed unaware that he had qualified at all.

“Sure [I’d like to meet Rafa]—in the finals: I prefer then! I don’t know what it takes for him to finish second in the group, so it’s going to be tough for him to finish second… [but] I have no preference. At this point everything is tough and fun at the same time because it’s cool playing those kinds of guys in the semis of the World Tour Finals. Of course, I’m going to be happy to be there myself, seeing them battle it out tomorrow.”

He also had something of a ‘brainstorm’ in his previous match, taking the on-court position he fancied even though seats are allocated pre-match by personalised towels. Protocol here has, for years, determined that the lower seed is announced onto court first, and walks through to the far seat. Federer, arriving before top-seed Novak Djokovic, took the first seat: Cue hasty rearranging of towels by court officials.

Djokovic admitted that he had noticed but was not bothered. Federer, though, pleaded ignorance over the faux pas.

“Took the wrong chair? I sat on that chair when I walked out against Tomas. I said, ‘I’d like to sit here again’. I walked out first. Usually the guy who walks out first decides which side he wants to sit on. That’s the rules to me, not a towel.”

He also seemed unaware that the No2 ranking is up for grabs this week. It is no small matter at this time of year, for it can determine whether Andy Murray or Federer is the No2 seed for the first Grand Slam of 2016 in Australia. But Federer neither knew nor cared, it seemed:

“I don’t even know what it takes. I have not thought about it at all since coming here. I was asked about it in Paris maybe, or even before that, by someone. Maybe it was in Shanghai. I see no importance to it for me personally, if it’s No2 or 3. As well for the Australian Open, for me has no impact.”
Back with tales and players of the past, though, and it was total Federer recall again. After his victory over the youngest player at the World Tour Finals, in 25-year-old Nishikori, he pondered the time when he was a young gun playing heroes almost a decade his senior.

“I loved the times before when I played my heroes, like Sampras, then other cool players I only knew from TV—Henman, Moya, Agassi, you name it… Wayne Ferreira, Krajicek. Next thing you know, I’m playing doubles with those guys.

“It was different, exciting times, but really, really special to make it on the tour and be in the restaurant together with them. It was crazy cool.

“Then all of a sudden they’re all gone, and now you’re the old guy. Now you have to inspire yourself in a new way. It’s about your own career, about your game, about matchups, places you play in, or also embracing the fact you’re playing against younger guys now who are changing the game. Kei is definitely one of those guys.”

How many more years Federer will be adding to this tennis memory bank has already been a topic of debate for years. Before he played in London 2012, winning the silver medal just a couple of days before his 31st birthday, he was fielding questions about retirement. Going out on a high after winning his seventh Wimbledon title was touted as the perfect storyline.

Now he is planning his 2016 schedule around the Rio Olympics, and announcing a new contract at a new tournament in Stuttgart until 2017.

Fresh challenges, changing rivals, new tournaments, all these continue to stock the Federer memory banks, then. Just don’t ask him to remember where he should sit.